A visit to the landmark of the Great Fire of London. 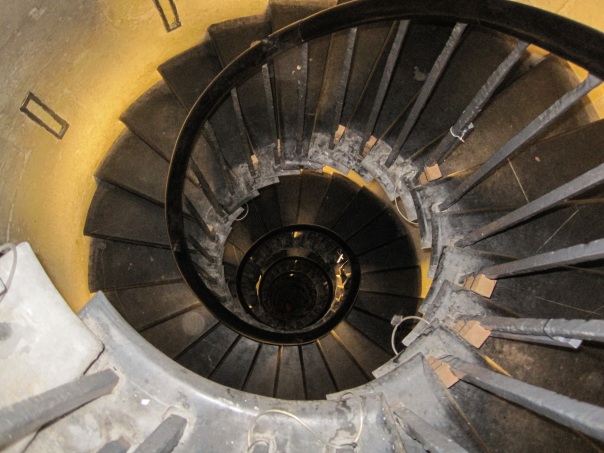 Ready to climb? The spiral staircase of The Monument

Londoners are no stranger to stairs. How many times have you been forced to take the stairs when the lift in your block of flats has broken down..? Or when the queues for the Piccadilly line lifts are so crowded, you know you could be underground another five minutes unless you take the ’emergency steps’ to the surface.

A long way up: The caged viewing platform has great views

Most Londoners rely on their feet, as well as the tube, buses and overland trains, to get around, so are used to walking. However, I have to admit I’m not the fittest of people and do feel a little out of breath after a brisk climb up a flight of steps. So I was rather apprenhensive about visiting The Monument.

Like many who have grown up in the city, we were taught about the Great Fire Of London at school. I’ve known about the Monument to the Great Fire for many years, and seen it from afar, but had never climbed it, until recently.

Quick history lesson for those who don’t know – the Great Fire of London started at a bakery on Pudding Lane – near the site of the Monument – on 2 September 1666. The fire ravaged the old city, including the original St Paul’s Cathedral. During the 17th century, the buildings were mostly made of wood and built very compacted together, so the fire spread rapidly. To commemorate the fire – which completely changed the City of London – Sir Christopher Wren (1632-1723) and Robert Hooke (1635-1703) designed a 202ft tall stone Roman doric column, which was completed in 1677. Although the tallest structure in the city at the time, it has since been dwarfed by the Canary Wharf skyscrapers and the Swiss Re (Gherkin) building, amongst others.

On a very windy day in November 2011, I finally decided to visit The Monument with a relative visiting from Scotland. Although I highly recommend the London Eye as a great attraction for visitors, The Monument offers a similar birds’ eye pespective of the city for a fraction of the price.  At the time of writing, it only costs £3 (I went for the Tower Bridge Exhibition combo ticket for both attractions for £9). Anyone energetic enough to tackle the 311 steps to the top is rewarded with a 360 degree view of the city. When I finally reached the top, it was worth all the breathlessness. The viewing platform has been caged in since a spat of suicides in the late 18th and early 19th century… and thank goodness. Situated not far from the windy River Thames, the top of The Monument is really exposed to the elements. The excessively windy day I had chosen to visit, I was taking photos with my camera and smartphone and was terrified they were going to get blown out of my hands. As much as I would hate being caged in, I was grateful for the caged platform for my safety.

View of the East of the Docklands and Tower Bridge

To read about The Golden Boy of Pye Corner, to commemorate the end of the Great Fire, click here.