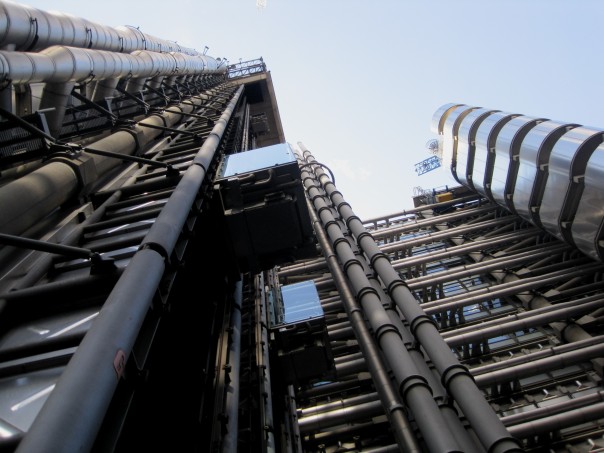 Inside out: The Lloyd’s Building features lifts, electrical power and water pipes outside 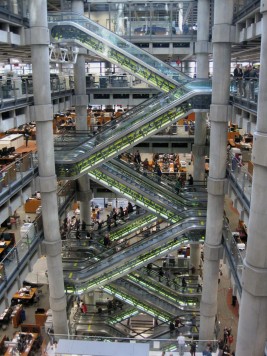 Whoever thought escalators could be attractive?

Unless you work in insurance, it’s highly unlikely you’ve ever stepped foot in the iconic Lloyd’s Building. Although since dwarfed by Heron Tower and the Gherkin since it was first built in the City of London 26 years ago, Lloyd’s is still an important landmark and a striking, original piece of architecture.

This year was my first time (amazingly) at Open House London weekend – two days every September where buildings not usually open to the public throw open their doors for free – and Lloyd’s was top of my to do list. Armed with a camera, comfortable shoes and some patience (there can be a lot of queuing involved), my friend and I started off our Open House day at Lloyd’s. The queue was pretty long, wrapping around two corners of the building, where we ended up joining it in Leadenhall Market. But unlike some other Open House venues which had guided tours, there was a constant flow of people in and out so we ended up waiting for about 40 minutes – not too bad considering how daunting the queue looked at first. 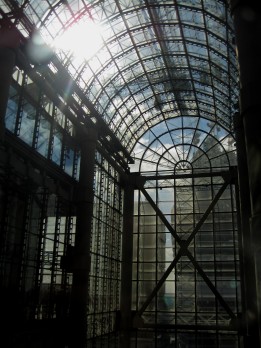 Let the sun shine in: There’s no chance of workers feeling cooped up in here

A bit of history to the building – Lloyd’s has been in the insurance business for over three centuries, with merchants meeting at Edward Lloyd’s coffee shop in the City to insure their ships over 300 years ago. While the Lloyd’s Building is a modern masterpiece of architecture, the illustrious history of the company is never far away, thanks to museum pieces, the Lutine Bell, the Loss Book and the Nelson Collection all on show.

Soon after entering the building, thoughts of the long queue quickly evaporated. After riding an escalator up to ‘The Room’, we were in the centre of the building, looking up at the awe-inspiring interior of Lord Richard Rogers’ masterpiece. Bordering the atrium, were rows of desks and PCs where the underwriters and brokers sit every weekday. The main draw of The Room is the Lutine Bell in the Rostrum, which was traditionally rung to mark important announcements.

After checking out The Room, we headed ‘out’ to one of the 12 glass lifts on the exterior of the building. I’m pretty good at heights, but I have to admit to feeling rather dizzy with that lurching feeling in your stomach as we whizzed above Lime Street and the City below. Surrounded by glass walls, the view at the top was amazing. You could see lots of famous landmarks, including Canary Wharf, Battersea Power Station, London Eye and St Paul’s Cathedral.

Towards the top of the building was a surprising piece of the 18th century – the Adam Room. After being surrounded by metal and glass, to suddenly be stepping into a room with classic furniture, coving and chandeliers was a surreal moment. The Adam Room was actually relocated from the previous 1958 Lloyd’s building and is used for meetings, presentations and dining.

Looking up… and down: Hope you’ve got a head for heights!

A different type of City view

← Classic British grub at the London Transport 1950s pop-up Canteen
From an ad in the paper to biggest TV show in the world | How one woman became a dancer in the Olympics Closing Ceremony →
%d bloggers like this: