← Brumus restaurant at the Haymarket Hotel review: Hearty British grub with a bit of Italian
Theo-riffic: Rustic Italian fare at Theo Randall at the Intercontinental →

Cheers! The streets are alive with the sound of clinking for London Cocktail Week 2012 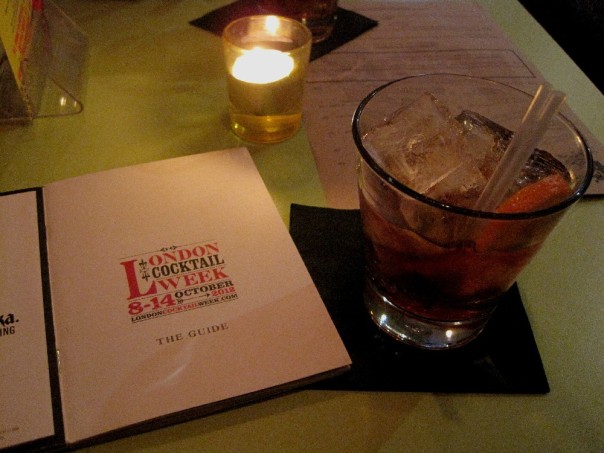 Cheers! An ‘island negroni’ at Barrio Central in Soho

Like many women (and some men who don’t always admit it for fear of sounding girlie!), I love a good cocktail. I’ve been a connoisseur of mixed drinks since my late teens and am always up for trying something new. Now, fellow cocktail lovers like myself, will know the average London price of cocktail has been climbing steeply over the years. These days, you’re probably looking at £8-£12 in an average West End bar for the likes of a Dirty Martini or a Woo Woo.

Known for having some of the best nightlife and bars in the world, it’s only apt that London should have a cocktail festival. The organisers of London Cocktail Week wisely chose October (8th-14th) to have it as a pick-me-up as we start realising that winter and dark nights are fast approaching. The week-long festival centres of Seven Dials in Covent Garden, but has venues all over the capital taking part.

Due to my working pattern, I only got to go to London Cocktail Week on the last day on the Sunday, which unfortunately for me, meant there weren’t as many bars open due to it being a Sunday. As we picked up our £10 wristbands – which entitled us to £4 cocktails in all participating bars – from the pop-up LCW office in Shorts Gardens, we were informed the festival had proved so popular that some bars had actually run out of ingredients and had to stop taking LCW customers! The wristbands also give people access to use the vintage routemaster buses, which were bringing revellers around some of the venues.

Aside from the obvious cocktail offers, there were also discounted meals, tastings and masterclasses dotted around bars, restaurants, hotels and pop-ups. Coco de Mer in Monmouth Street, Seven Dials had teamed up with Cointreau to offer customers cocktails as they perused luxury lingerie.

As I only had a few hours on my hand, we ended up at Barrio Central in Poland Street. The Latin bar and restaurant had conceived a new cocktail – an Island Negroni – an incredibly strong concoction of Blackwell’s rum, chocolate notes and sweet orange. It was tasty, but after one, I couldn’t resist a Mojito, quite possibly my favourite cocktail yet.

The festival gives people the opportunity to taste drinks and visit bars they perhaps wouldn’t normally do. So while I only got to experience a little of London Cocktail Week, I definitely plan to make more time for it next year and not on a Sunday! 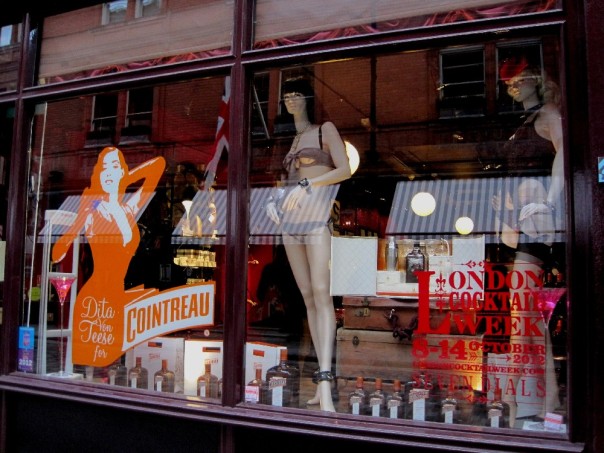 ← Brumus restaurant at the Haymarket Hotel review: Hearty British grub with a bit of Italian
Theo-riffic: Rustic Italian fare at Theo Randall at the Intercontinental →
%d bloggers like this: