← Theo-riffic: Rustic Italian fare at Theo Randall at the Intercontinental
What’s on this Winter: Fun things around London this December 2012 →

Marvellous Melbourne – the skyscrapers of the CBD overlooking the Yarra River

Head for heights: Check out the view from the 88th floor of the Eureka Tower

Many visitors to Australia tend to spend their time in Sydney, Uluru (aka Ayers Rock) or the Gold Coast. To a majority of overseas travellers, they’re on a limited timescale to see so much of a huge country so many miss out on Melbourne – the capital of Victoria.

Having previously lived in the city for five-six months as a backpacker nine years ago, I recently returned to Melbourne for the first time as a holidaymaker for a friend’s wedding. With other friends also in the city for the same event, I was able to use my ‘semi-insider’ knowledge to show them the Melbourne I love. While things had certainly changed a lot since I had lived there, the cosmopolitan city has retained the laid back, friendly atmosphere and gastro delights it has always had.

While researching Australia, many holidaymakers may find not many sights drawing them to Melbourne. While the city is lacking in architectural wonders like Sydney’s Opera House or Harbour Bridge, there is a certain ‘something’ in the air which makes Melbourne a great place to visit. Melbourne’s big attraction is its numerous cafes, bars and restaurants – you’ll be hard pushed to find a bad meal. Depending on what you like and the prices you’re prepared to pay, there’s the upmarket brasseries of Toorak and South Yarra or the chilled out cafes in Collingwood and Fitzroy.

Before I go into details with my tips of things to see and do during your trip to Melbourne, I highly recommend picking up the official visitor guide to Melbourne, which can be found at the airport and other tourist hotspots. It has extensive maps, information, listings and vouchers giving you discount to Melbourne’s many attractions. While this blog post isn’t an extensive guide, it includes what I personally love about the city and includes many sights I believe should be top of your list while visiting Melbourne. 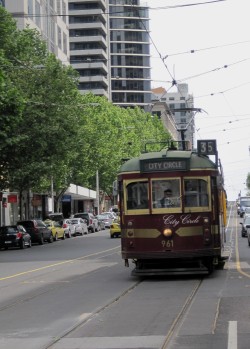 Get your bearings: Hail the free City Circle tram looping the CBD

The CBD, like many Australian cities, is laid out in a grid system so is easy to get around. Among the main streets to look out for are Flinders Street by the Yarra River, which includes Federation Square (a good meeting place with cafes, events and free wi-fi), Swanston Street, Collins Street and Bourke Street – some of which is pedestrianised for the city’s main shopping area. To those first arriving in Melbourne, I recommend hailing the free City Circle 35 tram, which does exactly what it says on the tin. The vintage tram gives information about the city’s sights and history and can help you get your bearings.

Melbourne is renowned in Australia for its museums with the Immigration Museum, Old Melbourne Gaol (which includes Ned Kelly’s death mask as he was hanged there in 1880) and the Melbourne Museum all located in or just outside the CBD. Just north of the CBD is the Queen Victoria Market, which has been open since the 1870s. The expansive market is helpfully divided into sections for food, with Victoria’s best cheese, meat and fish to be found here. In the northern section of the market is a host of tourist and fashion stalls, which tend to be better value than similar shops in the CBD so it’s a good place to pick up souvenirs.

In terms of shopping in the CBD, the main areas are Bourke Street – which includes department stores Myer and David Jones and the GPO Mall – the former Post Office which has been converted into a mall. Collins Street is the most upmarket address in the CBD and includes a host of designer stores and ‘Australia on Collins’ – a modern multi-storey shopping mall. For those looking for more atmosphere, check out the classic stores and cafes of the Royal Arcade (b.1839) and The Block (1890s) which run off Collins Street and Bourke Street.

The CBD is also famous for its many pedestrianised lanes joining the streets. Many of the CBD’s hottest bars can be found down the lanes, with another attraction (to those who appreciate that kind of thing) is the street art – in particular Hosier Lane and Union Lane.

Metro Girl Likes: The Riverland on the banks of the River Yarra just south of Federation Square. After ordering at the window, you find a table at this alfresco café and enjoy great views of the river and Princes Bridge. They serve brunch until 2pm and I can particularly recommend apple pancakes with rhubarb compote, cream and mint for AU$18. 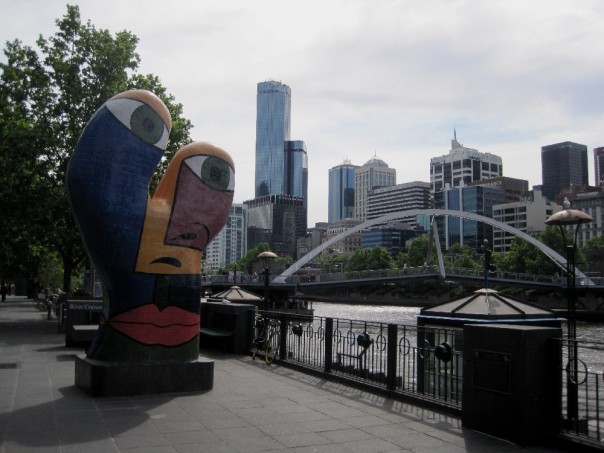 Different perspective: Check out the sights of the CBD from the Southbank with a riverbank walk, sculptures and plenty of food and entertainment

Southbank has rapidly grown over the past 10 years and is a big draw to visitors thanks to the new Eureka Tower, which includes an observation deck on the 88th floor. The Crown Casino complex is also a popular spot and includes shops, restaurants, bars, nightclubs and of course, plenty of opportunities to gamble. The paved area along the river has rapidly improved over the years and provides a nice place to stroll in the sunshine, with plenty of sculptures, benches, greenery and spots for alfresco dining. Further west is the South Wharf – a new development – including the DFO South Wharf, an outlet mall with plenty of bargains to be found. Near the DFO is the new Webb Bridge, which links the Southbank to Docklands, a new development encompassing offices, housing, restaurants and bars. The 35 City Circle tram also ends at Docklands’ Waterfront City.

St Kilda is Melbourne’s beach suburb, although in comparison to most Australian beaches it is rather petite. Nonetheless, St Kilda retains a relaxed, seaside atmosphere and has plenty of attractions. As well as being a major nightlife hub with its many bars and restaurants, it’s also home to the listed Art Deco Palais Theatre and theme park Luna Park, which celebrates its centenary in December 2012 and includes the Scenic Railway – the oldest continuously operating rollercoaster in the world. The two main streets to start on are either Fitzroy Street or Acland Street, which have plenty of bars and restaurants on each. Two big draws are the Esplanade Hotel (aka The Espy to locals), a double-fronted pub which has good music, food and drinks and views of the bay, and the Prince Of Wales Hotel on Fitzroy Street – which has live music most nights and draws big names from around the world. 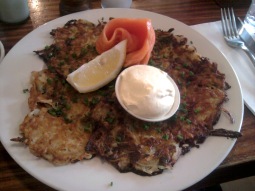 Metro Girl Likes: Lunch at Batch, 1/320 Carlisle Street, St Kilda East (near Balaclava train station). A small café run by a New Zealander (hence the vintage NZ posters on the wall) with the menus stuck in the pages of vintage books. I had a delicious lunch of fried potato pancake with onions and chives, topped with lashings of smoked salmon. Friendly staff, nice atmosphere and yummy food.

Baker D Chirico, 149 Fitzroy Street, St Kilda. Open from 7am every morning, this traditional bakery attracts both restaurants and cafes owners for their ingredients as well as hungry customers looking for their delicious breads or cakes.  There is a huge choice and also a small sit-in area if you can’t wait to get back to your home or hotel to eat.

Cosmopolitan Hotel, 2/8 Carlisle Street, St Kilda. Located a stone’s throw from Luna Park and the 16 tram stop from the CBD, this boutique hotel is good value and quality. The staff were very friendly and the deluxe rooms were spacious with very comfortable beds and good amenities.

Rock out in St Kilda: The Espy behind a statue of Caption Cook (left) and the Prince Of Wales Hotel on Fitzroy Street (right) 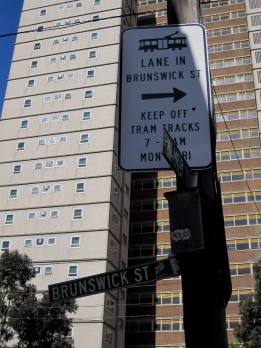 Bohemian Brunswick Street has plenty to offer, including bars, cafes, boutiques and a very different feel just a short walk from the CBD

As this is the area I lived in during my time in Melbourne, I am obviously a bit bias towards it. When I was choosing where to live, I was immediately won over by the area upon first arrival and despite the dubious quality of the house I ended up living in during my time there (I was a backpacker after all!), I was determined to base myself in Collingwood. The neighbouring suburbs – of which their hubs are Fitzroy’s Brunswick Street and Collingwood’s Smith Street – are located just north-east of the CBD, which is in easy walking distance. The area is rather Bohemian and attracts artists and students and includes a host of cafes, bars and independent boutiques. The northern end of Smith Street also includes a lot of outlet stores.

How to get there: Catch the 11 or 112 tram to Brunswick Street from Collins Street in the CBD or 86 to Smith Street from Bourke Street.

Metro Girl Likes: Vegie Bar, 380 Brunswick Street. A long-standing institution serving vegetarian and vegan choices, that even the most hardened carnivore will find something to whet their appetite.

Bimbo Deluxe, 376 Brunswick Street. A pizza place-come-nightclub. A popular place to end the night for many locals with the AU$4 gourmet pizzas drawing many returnees. The ‘anything goes’ feel suits the varied music policy of hip-hop, house, soul, funk and disco. Bimbo includes various lounges and a rooftop terrace.

Provincial Hotel, 299 Brunswick Street. Located at the major junction with Johnston Street, the Prov is a piece of old Fitzroy, drawing drinkers from the surrounding areas for decades. Upon first look, you may think the peeling paint of the exterior looks like it could do with some work, but its all part of the shabby chic charm. During the day it attract diners, while on the weekends it really kicks off with drinking and dancing until the early hours.

Heart of Fitzroy: Drinkers have been drawn to the Provincial Hotel for years

For my tips on what to see and do in Sydney, read my blog post on Melbourne’s rival: Sexy Sydney: There’s more than you think to Australia’s harbour city.

For Metro Girl’s other travel posts, check out the You Can Take The Girl Out Of London… section

Posted on 8 Nov 2012, in You can take the girl out of London... and tagged Travel. Bookmark the permalink. 2 Comments.

← Theo-riffic: Rustic Italian fare at Theo Randall at the Intercontinental
What’s on this Winter: Fun things around London this December 2012 →
%d bloggers like this: