← A Complete History Of London: Funny, abridged story of the city in a Roman amphitheatre
Rare colour film of bustling London town in 1927 →

The history of these striking 12th century ruins on Bankside.

While London has been in existence for over 2000 years, there is little that remains from the earlier centuries. The Tower Of London and sections of the old Roman Wall are just a few pre-17th century remnants of the City of London. Over the centuries, the city has been ravaged by fire, plagues and bombs. Back in the 13th Century, the population of London was extending beyond the City walls, as the adjoining City of Westminster was also rapidly growing since the 11th century – with people spreading across the River Thames to the South Bank.

Of course, during William Shakespeare‘s times, Bankside would have been comparable to Soho or Shoreditch today – where the population went to party and be entertained. However, a few centuries before the Elizabethan playhouses entertained the masses, Bankside became home to Winchester Palace – a city base for religious leaders. 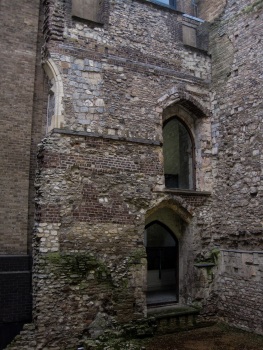 The remains of the gable wall with doors leading to the kitchen, pantry and buttery

The town of Southwark belonged to the old Diocese of Winchester – when the Hampshire city was the capital of Saxon England – and was a handy base for the Bishop when he needed to visit London for royal or state business. Henry of Blois (1096-1171), the Bishop of Winchester at the time, decided to construct the palace in the 12th century as a permanent base. The palace included a Great Hall, prison, wine cellar, brewery and butchers, among other buildings on the large site. As well as providing somewhere to rest, it soon became a place for entertainment. The palace played host to royal guests over the decades and was the location of James I of Scotland (1394-1437) and Joan Beaufort’s (d.1445) wedding reception in 1424. The bishops certainly lived well – even having access to tennis courts, garden and bowling alley. In 1642, the palace was converted into a prison to hold royalists during the English Civil War. One notable prisoner was Sir Thomas Ogle.

The palace remained in use for nearly 500 years until the 17th century when the building was divided up into warehouses and tenements. However, like many of London’s greatest Medieval buildings, it was largely destroyed by fire in 1814. The existing ruins, which lie on the Thames Path, were partially re-discovered in the 19th century following another fire and thought to be mostly 14th century. Further redevelopment of Bankside in the 1980s uncovered more remains. The ruins were Grade II* by Historic England in 1950 and have been deemed a Scheduled Ancient Monument. Today, all that’s left is the stunning, 14th century rose window and the gable wall with doors leading to the pantry, buttery and kitchen. The lower level would have featured a vaulted cellar, with direct access to the river wharf. The window was restored in 1972.

Quite a sight: The remains of Winchester Palace are visible alongside the Thames Path

For the rest of Metro Girl’s blog posts on London history, click here.

← A Complete History Of London: Funny, abridged story of the city in a Roman amphitheatre
Rare colour film of bustling London town in 1927 →
%d bloggers like this: