Cleopatra’s Needle | How an Egyptian obelisk ended up by the Thames… and why isn’t it Thutmose’s Needle?

Standing on the banks of the River Thames is an ancient piece of Egyptian history.

Regardless of your knowledge of ancient Egyptian history, few would disagree that Cleopatra and Tutankhamun are two of the nation’s most famous rulers. While Tutankhamun’s reign was relatively short and his fame is largely down to the discovery of his tomb, Cleopatra was known for many reasons – her power, her beauty and being the last pharaoh of ancient Egypt. So when it comes to the ancient Egyptian obelisk standing by the River Thames on the Victoria Embankment, Cleopatra’s Needle is a lot more glamorous a name than one would have been a lot more accurate… Thutmose III’s Needle. 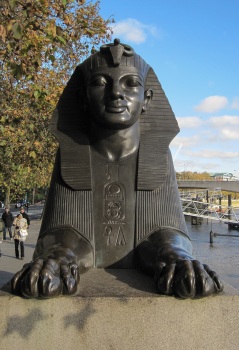 The bronze sphinx includes the words ‘the good god, Thuthmosis III given life’ written in hieroglyphics

The name Cleopatra’s Needle is shared between three Egyptian obelisks – the London one’s twin in New York City and a third in Paris – which came from a completely different site in Egypt. The London and New York pair are made of red granite from the quarries of Aswan, weighing a hefty 224 tons each. Standing tall at 68ft (21 metres), they were originally erected in ancient Egyptian city of Heliopolis by Pharoah Thutmose III (1481-1425BC) around 1450BC. Ramesses II (1300s-1213BC) added the hieroglyphs around 200 years later to commemorate his military victories. The obelisks remained in Heliopolis for around 1,400 years before they were moved north by the Romans to Alexandria to be placed in the Caesareum around 12BC. Although the Caesareum in Alexandria had been built during Cleopatra’s (51-30BC) reign, the obelisks didn’t arrive there until around 15 years after she had committed suicide. So why her name is associated with the obelisk is inaccurate, but probably brings a bit of glamour to it – but when it’s nearly 3,500 years old, I don’t think it needs the help to be any more impressive! The obelisks didn’t stay standing for long and were toppled some time later, spending centuries in the Egyptian sands.

Ancient world meets modern: The needle is dwarfed by the Art Deco Shell Mex House (b.1930-1931) and its recognisable clock tower 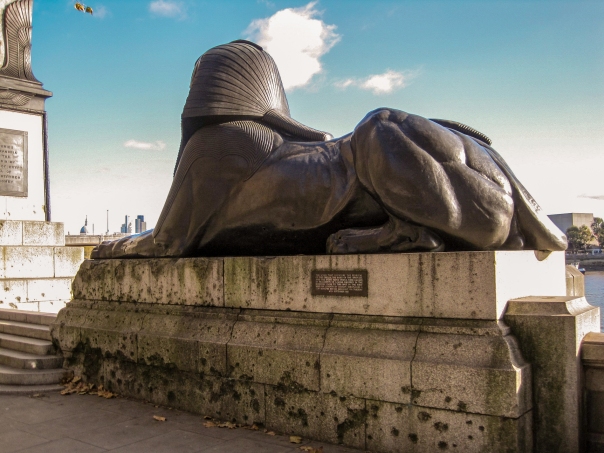 Survivor: The west sphinx and its pedestal, as well the obelisk base were damaged by a German bomb on 4 September 1917

These days, Egypt is rightly intent on keeping on to its treasures. However, in the early 19th century, Egypt’s ruler Muhammad Ali (1769-1849) was happy to give away a piece of antiquity. Following the victories of Lord Nelson and Sir Ralph Abercromby in the Battle of the Nile and the Battle of Alexandra in 1798 and 1801 respectively, Ali gave one of the obelisks to the United Kingdom as a thank you gift in 1819.  Although honoured, the then-Prime Minister Robert Banks Jenkinson (1170-1828) and his government couldn’t justify the huge expense it would have cost to transport the 224 ton monument to the UK. It remained in Alexandria for over five decades until anatomist and dermatologist Sir William James Erasmus Wilson (1809-1884) decided to fork out the money and organise the mammoth feat for  the obelisk to be dug out of the sand at Alexandria and brought to London. The obelisk left Alexandria on 21 September 1877, encased in an iron cylinder – nicknamed The Cleopatra – which included a stern and rudders and was towed along by the Olga ship. However, when it was over halfway to its destination, a storm in the Bay of Biscay put the crew of The Cleopatra in danger. The initial rescue attempt led to six crewmen from The Olga drowning, but eventually The Cleopatra’s Captain Carter and his five crew were rescued. Amazingly, The Cleopatra didn’t founder and was discovered drifting in the Bay a few days later and eventually retrieved by the Fitzmaurice and towed to Ferrol Harbour in North-West Spain. From there, she was towed to Gravesend, Kent, by the paddle tug Anglia, arriving on 21 January 1878. Finally, on 12 September 1878 – 59 years after the UK had been given it as a gift – Cleopatra’s Needle was erected on the Victoria Embankment of the River Thames.

Although they certainly look the part, the two sphinxes ‘guarding’ the obelisk aren’t quite so old. The bronze sphinxes were designed by George John Vulliamy (1817-1886) and created at the Ecclestone Iron Works in Pimlico in 1881. They include the words ‘the good god, Thuthmosis III given life’ written in hieroglyphics. It has been pointed out they aren’t really guarding it, but rather looking at it and should have been facing outwards from the obelisk. Despite surviving intact for nearly 3,500 years, London’s obelisk came close to being destroyed in World War I. A German bomb landed near the needle on 4 September 1917, causing damage to the pedestal of the obelisk, the pedestal of the sphinxes and to the west sphinx itself. However, the damage remains to commemorate the event and can still be seen to this day. A plaque has been placed on the western sphinx to explain this. Meanwhile, it’s twin was erected in Central Park in New York City in 1881.

Raising the needle on the Embankment in 1878.
‘Engineering’ Journal.

Looking at… not quite guarding: One of the two Victorian faux sphinxes

Read more on history of the local area

Who do you sphinx you are? The history behind the camel and sphinx benches on Victoria Embankment

Seen a Dolphin in the Thames? Story behind the lamps on the Embankment

Who moved the Thames? York Water Gate at Embankment Gardens

‘Roman’ bath at the Strand | What the Dickens is the history behind this old watering hole?

Having a gas | The last Webb Patent Sewer lamp in London