← MINT Polo In The Park 2013: Bringing a country sport to the big smoke
Buxton Memorial Fountain | A memorial to one of Westminster’s most important laws →

Long before it became a food and shopping destination, the Galleria was known as Hay’s Wharf.

The Navigators, a moving bronze sculpture of a ship by David Kemp

Hay’s Galleria is known today as an area for eating, drinking, working and shopping. Many pass through the covered shopping centre on their way to Tower Bridge or HMS Belfast. However, by looking at the building, it’s obvious to see it wasn’t built for these purposes, and like many buildings along the banks of the River Thames, started life as a wharf.

Despite rumours of the contrary, wharf does not stand for ‘ware-house at river front’. The word wharf originates from the Old English ‘hwearf’, which meant bank or shore. Before the advent of cars, boats were the main form of transport in London, so there were once as many as 1,700 wharves on the bank of the River Thames.

The site was originally a brewhouse, which was bought by Alexander Hay in 1651. However, the building was severely damaged in the Great Fire Of Southwark in 1676. It remained with the Hay family until Francis Theodore Hay, Master of the Waterman’s Company and King’s Waterman to George III and George IV, died in 1838. The next owner John Humphrey Jnr acquired a lease on the property and commissioned engineer Sir William Cubitt (1785-1861) to convert it into a wharf with an enclosed dock, becoming Hay’s Wharf in 1856 (see a photo of the Wharf in 1857). However, just five years later, the wharf was damaged by another fire, the Great Fire Of Tooley Street, which overall caused £2million of damage due to the contents of the warehouses destroyed. 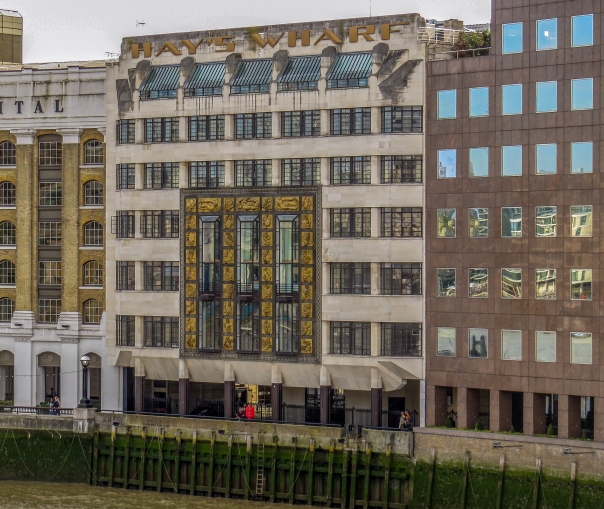 During the 19th century, Hay’s Wharf was one of the main delivery points in the capital, with an estimated of 80% of dry goods passing through the building, including the very popular tea. The sheer importance of Hay’s to London’s trade and import industry led to it being nicknamed ‘the Larder of London’. (For a photo of Hay’s Wharf in 1910, click here.) 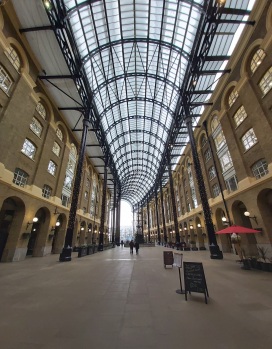 Hay’s Wharf was such a lucrative business, the company was able to build an Art Deco headquarters a few doors to the west. The river-facing structure was erected in 1928-1932 to a design by architect Harry Stuart Goodhart-Rendel (1887-1959). The Thameside façade features panels depicting ‘Capital, Labour & Commerce’ by sculptor Frank Dobson (1886-1963).

However,  the wharf was seriously damaged again by bombing during World War II. London’s trade was severely dented following the war and over the subsequent years, more and more wharves shut down and fell into neglect. With ships getting bigger, Hay’s enclosed dock wasn’t big enough to fit most of the vessels, so fell into disuse. Fortunately in the 1980s, the wharf was brought back to life by property developers. The dock was covered over, while the tea and produce warehouses were restored and converted into offices. A glass and steel barrel-vaulted roof was erected over the former dock area in a Victorian style. In 1987, ‘The Navigators’, a moving bronze sculpture of a ship by David Kemp, within a fountain, was unveiled in a nod to the wharf’s shipping history. Meanwhile, the Art Deco HQ is now known as a St Olaf House and is used by the neighbouring London Bridge Hospital.

Now known as Hay’s Galleria, the building is a mix of shops, offices and restaurants today. There are several market stalls under the covered walkway, as well as branches of Boots, Café Rouge, The Christmas Shop, Bagel Factory, Côte and Starbucks. On a nice day, I would suggest buying some takeaway food here and bringing it for a picnic in nearby Potters Field Park overlooking Tower Bridge and the Tower Of London. Alternatively on a warm summer night, sink a pint riverside at the Horniman At Hays pub – named after the tea merchant Frederick Horniman. Also nearby is the museum on board the HMS Belfast. 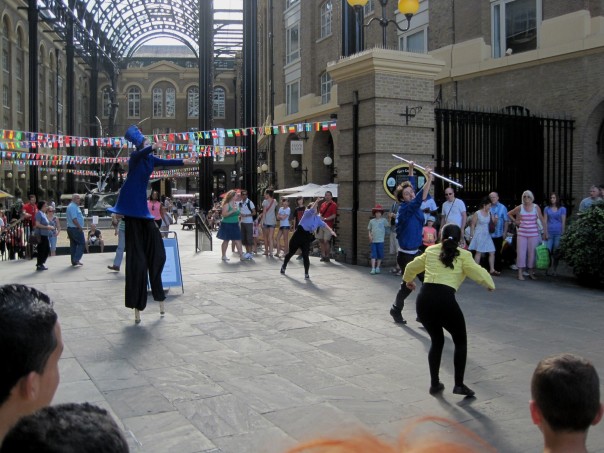 What a backdrop: Performers at the gates to Hay’s Galleria during the Thames Festival 2012

Hold fire! The story behind the cannon bollard on Bankside

← MINT Polo In The Park 2013: Bringing a country sport to the big smoke
Buxton Memorial Fountain | A memorial to one of Westminster’s most important laws →
%d bloggers like this: