88 miles-per-hour: Watching Back To The Future at Morden Hall Park

Watch classic films, such as Back To The Future, which was shown by Pop Up Screen at Morden Hall Park

Watching films in the open air has long been a fantasy of mine since I watched Danny and Sandy go the drive-in in the classic film Grease. On previous holidays to visit my family in Canada, I have been to the drive-in a few times and absolutely loved it. However, when it comes to London, not many of us have cars, and with traffic and parking a bit of a nightmare, drive-ins aren’t such a good idea for the capital.

Drum & Kernel popcorn and a pint of cider

In recent years, the ideas of pop-up open air cinemas in London has been growing steadily in popularity. The great thing about these pop-ups is the possibilities for locations are endless – parks, rooftops, museums, cemeteries… They screen a mix of new and classic films and appear in venues across the city so there is always something on near you during the summer.

Two weeks ago, a friend and I booked tickets for the Pop Up Screens’ screening of Back To The Future. The 1985 film is a classic and has been a favourite of mine since childhood. While the film has long been a part of my DVD collection, I have always wanted to watch it on the big screen as I never had this opportunity when it was first released. The venue for this particular screening was Morden Hall Park in South West London. Located 10 minutes walk from Morden tube station, or with ample on-site parking for drivers, the park is a lovely large space run by the National Trust, with streams, lots of woodland and the historic Morden Hall and Cottage. Parked outside the 18th century buildings was a DeLorean replica time machine, complete with flux capacitor, which excited the BTTF geek inside me!

We had booked our tickets online – £8 per person – and I was pleased to see the company encourages you not to print out the tickets, but showed your email with reference number at the date on your smartphone in a bid to save paper. Armed with our deckchairs and hoodies for when it got colder later, we pitched up a good spot in front of the screen. Also on site were toilets, a licensed bar selling wine, cider and beer, a Drum & Kernel Popcorn stand and a food stand serving burgers, etc. The prices were reasonable for both and the popcorn serving was very generous and a tasty fusion of sweet and salty flavouring. As always, the film was brilliant, but is special to watch it in a large group. There was a wide range of ages in attendance, including families. When (SPOILER ALERT!) George McFly knocks out bully Biff in one of the film’s pivotal scenes, there was a cheer from the audience, and when the movie ended, there was a round of applause – not what you get in a normal cinema. Overall, it was a great opportunity to watch a classic film on a big screen, be introduced to a part of London I hadn’t seen before and share the cinematic experience with a group of people I didn’t know. Highly recommended.

For a full list of pop-up cinemas companies, read Cinema under the stars: Guide to open air cinemas in London. 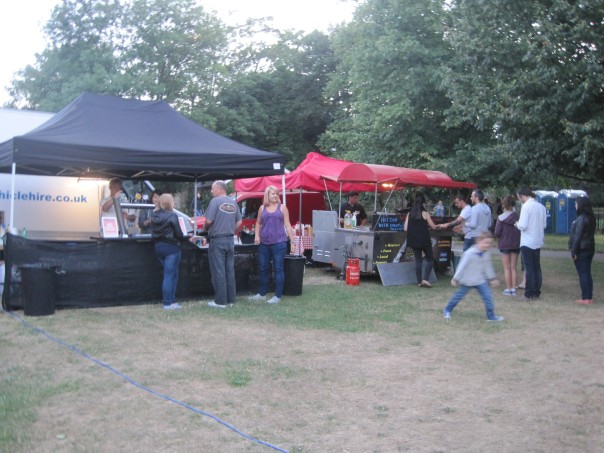