← Adiva review: Mezze, BYOB and belly-dancing at a Lebanese-Turkish fusion restaurant
Visit the ruins of a Billingsgate Roman bath house →

Travel back in time at the Dennis Severs’ House in Spitalfields 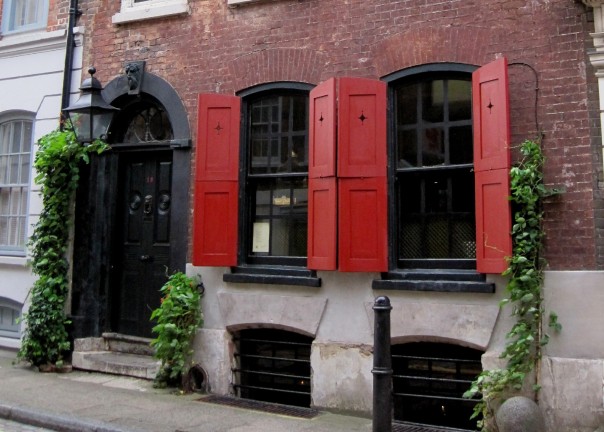 If time travel were ever made possible, I would do everything in my power to get to the front of the queue to try it out. However, with the possibility of crossing space and time looking unlikely at the moment, I’ll have to make do with my imagination…

This is where the unique Dennis Severs’ House comes in. While not exactly a museum, this private house is opened on rare evenings as a ‘still-life drama’. Earlier this month, I booked tickets for an evening visit time slot with my mother after hearing the house was opening its doors. As we weren’t allowed to take photos – so as to not distract from the experience – I will attempt to give a best description as possible of this unusual visit.

The Dennis Severs’ House is located at 18 Folgate Street, standing amidst a neat row of early Georgian terraces, just a stone’s throw from Spitalfields Market. No. 18 was built in 1724 and had four storeys, including a basement – featuring 10 rooms which are all accessed on your visit. At the time of building, Folgate Street was known as White Lion Street, being renamed the former in 1938. In the early 19th century, an attorney lived in the property, with a silk or velvet manufacturer moving in in 1856.

No photos or talking is allowed in the house

The fact No.18 is still standing is very lucky indeed, as its neighbour at 20 was demolished in the 1950s, with 12 and 14 following suit in 1980. These lost houses were eventually replaced by the Georgian-inspired modern terraces you see today.

The late American artist Dennis Severs (1947-1999) bought the property in 1979 when it was dilapidated and spent 20 years restoring each room in different historical styles from the 18th and 19th centuries. Throughout each room are signs of the fictional inhabitants, the Huguenot Jervis family, who are imagined to have lived in the house over several generations.

After being greeted at the front door, we were given a brief premise to turn off our phones, no cameras or talking and let the house draw us in. The motto of the house is, ‘You either see it, or you don’t.’ Starting on the ground floor, before working our way down to the basement, then up to the upper floors, each room was full with antique furniture, clothing and other remnants from yesteryear. However, in contrast to museums where visitors are kept at a distance from roped off interiors, you are invited to study the objects in furniture in great detail, up close and personal. If you looked close enough, you could see little notes written by the Jervis family.

Although no-one lives in the house now, lit candles, sound effects and crackling fires makes 18 Folgate Street feel very much alive. Discarded clothing, half-eaten food, unmade beds and broken cups on the floor give the impression the house is still being lived in – but as if the inhabitants have just popped out for a minute, or perhaps left in a rush. The creaky, original staircases and my barely-visible reflection in the aged, glass mirrors added to the feeling I was in another time. Further fuelling the historic atmosphere, sound effects of ringing bells, clip-clop of horses and carriages and cannon shots helped drown out the 21st century sounds outside.

After 45 minutes, I left the Dennis Severs’ House very impressed. It is such a unique place and gives you plenty food for thought. When visiting for the first time, keep an open mind and embrace the quiet and olde world of the house. Although it is also open for some daytime visits, through personal experience I would believe the evening visits would be a lot more atmospheric.

Learn about the history of another Spitalfields terrace, No.4 Princelet Street.

← Adiva review: Mezze, BYOB and belly-dancing at a Lebanese-Turkish fusion restaurant
Visit the ruins of a Billingsgate Roman bath house →
%d bloggers like this: