← Guide to what’s on in London in November 2013
A monument to victory, grand park entrance and an upset Duke | History behind the Wellington Arch →

Cornwall travel review: A long weekend at the end of England

The view from Charlestown, South Cornwall 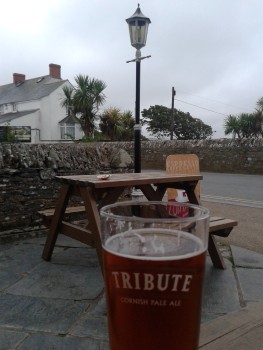 Cornwall is, without a doubt, one of England’s most beautiful counties. Surrounded by coastline north and south and at the end of England before it looks out to the Atlantic, it is renowned for its stunning scenery, among other things. Those who have been can’t help but fall in love with the place, while those who haven’t, admit they have long wished to go. What can put many off visiting is the long distance Cornwall is from many major cities. As a Londoner, it is a good five-hour drive to Cornwall or an equally as long train journey. Finally, in September this year, the wedding of two friends in Cornwall gave me the much-needed jolt to finally decide to go… and as I expected, I too fell in love with the place. Cornwall is an incredibly long county with a wide variety of places to go. As I was there for a long weekend – with some wedding festivities taking up some of my time – I will review some of the places I visited. Obviously, this is not a comprehensive overview of Cornwall, but what places I did see, I was charmed by.

A group of five friends – myself included – were all invited for the wedding so decide to rent a cottage together. After much searching around, we came upon a company called Natural Retreats. They own two holiday estates of self-catering properties in Cornwall – in Newquay on the north coast and Trewhiddle – just outside St Austell in South Cornwall. As our friends’ wedding was at the Eden Project a few miles away, we decided on Trewhiddle. We rented a four bedroom, four bathroom two-storey lodge, including parking space and outside dining area. Three of the rooms included ensuites with lots of hanging space and modern, contemporary furnishings. The kitchen was incredibly well equipped and we were greeted with a welcome hamper, including milk, juice, wine, bread, eggs and some other foods to tide us over at the beginning of our stay. The lodge include an open plan kitchen, diner, living area with lots of windows letting in the Cornish sunshine. All five of us found the beds incredibly comfortable and slept very well. 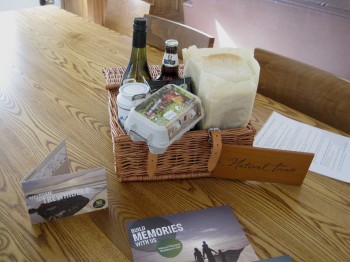 When it came to eating, we enjoyed a lot of seafood, pasties (of course!) and fish ‘n’ chips – which can be found easily in most seaside towns. Our first night, we walked a short distance from our lodge at Trewhiddle to Kingswood Bar and Restaurant in London Apprentice. It had been highly recommended on both TripAdvisor and in the local Natural Retreats guidebook, so we phoned ahead to book a table (which I would advise doing as it is incredibly popular). Set in a wide, open bungalow, the Kingswood is a comfortable and airy restaurant featuring contemporary interiors. I had the Creamy Field Mushroom Soup (£5) to start and the Hot Roasted Shellfish off the specials menu for my main, which featured mussels, prawns and scallops in garlic and parsley olive oil (£12). Both dishes were delicious and the service was fast and friendly. There was a really nice, warm atmosphere in the venue with lots of locals in attendance – evidence indeed of its good reputation.

Moody: The weather turned wet and windy during our visit to Tintagel, which made for some striking sea shots

Five miles away from Trewhiddle, is the charming fishing village of Mevagissey. Full of Georgian houses, skinny winding streets, independent shops and a harbour full of boats, it was a lovely place to stop for a meal and a walk. I visited twice on my Cornish break – once in the morning where I bought some homemade fudge from the Cornish Fudge Shop in Market Square and ambled around the streets enjoying the quaintness and the view of the sea. We returned there another evening for dinner at Roovray’s – a French restaurant on Polkirt Hill – before enjoying a few pints at The Ship Inn, a pub full of character (which also includes several rooms to let). Roovray’s was a cosy, warm and friendly eaterie with music provided by an in-house pianist, which is rare these days, but always a nice touch to a meal. I started with a hearty Soup Of The Day which was vegetable, followed by Fresh Tagliatelle with Lemon, Crab, Smoked Salmon and Cream. The food was rich in flavour and served in hearty portions – I did actually struggle to eat my whole dish – so didn’t have any room for dessert. All of my party enjoyed their meals and found the surroundings a relaxing environment.

The fishing village of Mevagissey was a charming stop for lunch, dinner or a spot of shopping

Although most of our days we spent walking around fishing villages and beaches and sipping the local ales and ciders at pubs, we did pay a visit to Tintagel Castle on the rugged North Cornwall coast. Standing near the village of Tintagel, the site includes the ruins of the Medieval castle and fortifications. Managed by English Heritage, the site has long been associated with the legend of King Arthur and is said to be where Arthur was conceived. As well as the ruins, the site also includes stunning views of the rugged coastline. During our visit, it was light rain and windy so made for quite an atmospheric sight. Be prepared for lots of stairs! After our windswept trip to the Castle, we stopped by the old, charming 14th century Ye Olde Malthouse Inn (which also includes a B&B) for a drink of some local beverages.

Drink with a view: We relaxed with a pint on the terrace of the Pier House Inn

Among the other seaside towns and villages we stopped by at was the famous Padstow – very picturesque indeed with lots of food options, including many Rick Stein venues, and independent shops. However, as someone from London, I was looking for somewhere less touristy and quieter (in contrast to my normal life) so I much preferred Mevagissey, Charlestown and Gorran Haven. Charlestown is a lovely 18th century village and port which I can imagine has barely changed since its seafaring heyday. We enjoyed a clamber over the rocks to a little beach inlet around the corner, which would have been a great spot to sunbathe on if the weather was a bit warmer. My friends and I commented on how the harbour looked like it hadn’t changed in 200 years… so it was no surprise to find it is frequently used as a film location for period movies and TV shows, including The Eagle Has Landed, Treasure Island, The Three Musketeers and Tim Burton’s Alice In Wonderland. Although we didn’t have time during our particular visit, there is the Charlestown Shipwreck and Heritage Centre, which includes a wide collection of artefacts from sunken ships. During our visit, we also stopped by the Pier House Inn for a pint (yes, we did visit a lot of pubs on the trip!), which also includes an on-site hotel.

My friends and I were also won over by the fishing village of Gorran Haven, about 2 miles from Mevagissey. The tide was out so we enjoyed a walk alongside the marooned fishing boats and explored the rocks covered in mussels, a cave and even spotted some starfish. With only a few shops amongst its winding lanes, we also popped into the tiny 15th century chapel St Just, an intimate place of worship nestled cosily between some houses. While Cornwall’s coastline contains some amazing clear sea, the water at Gorran Haven was particularly stunning and incredibly still during our visit. I would actually consider renting one of the cottages I saw overlooking the beach upon a return visit.

Overall, I loved my visit to Cornwall, even though I feel like I barely saw any of it. While I am very much a city girl through and through, I couldn’t help but be seduced by the peace, quiet and natural beauty of Cornwall. In fact, upon my return to London, I found the city a lot louder than usual for a few days in contrast to my chilled out state of the previous weekend. I can’t wait to go back…

Beach life: Enjoy a stroll along the beach at Gorran Haven when the tide is out

The big blue: The sea at Gorran Haven was incredibly blue, clear and still

Posted on 3 Nov 2013, in You can take the girl out of London... and tagged English Heritage, Travel. Bookmark the permalink. 2 Comments.

← Guide to what’s on in London in November 2013
A monument to victory, grand park entrance and an upset Duke | History behind the Wellington Arch →
%d bloggers like this: