A guide to Charles Dickens’ London landmarks – where he lived, worked and socialised.

Nearly two centuries after Charles Dickens’ first works were published, the author is still considered a legend in the literary world and is still read by millions across the world in many different languages. Many visitors (and residents) come to London in search of Charles Dickens every year. Sadly, many of the locales he frequented or wrote about are long gone, but there are still some homes in existence and sites for those wanting to make a Dickensian pilgrimage. Metro Girl has composed a list of where to find your own Dickens experience. To help you find them, they have been marked on the map below.

Dickens lived in this Bloomsbury house from March 1837 until December 1839 when he wrote Oliver Twist and Nicholas Nickleby. He had a three-year lease on the property, costing £80 a year. Now a museum, the Georgian house contains many artefacts and rare editions. Open daily 10am-5pm. Charles Dickens Museum, 48 Doughty Street, Bloomsbury, WC1N 2LX. Nearest station: Russell Square. For more information, visit the Museum website. For Metro Girl’s review of the museum, click here.

Charles Dickens was buried in Poets’ Corner on 19 June 1870 – five days after his death. This went against his own wishes to be buried in his home county of Kent in Rochester Cathedral. Westminster Abbey, 20 Dean’s Yard, Westminster, SW1P 3PA. Nearest station: Westminster. For more information, visit the Westminster Abbey website. 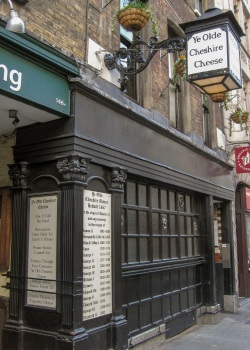 This famous pub on Fleet Street has stood on the site since the 16th century, with the present building rebuilt after the Fire of London in 1666. As a young reporter, Dickens is known to have drunk here and also featured the establishment in his novel A Tale Of Two Cities. Ye Olde Cheshire Cheese, 145 Fleet Street, EC4A 2BU. Nearest station: Blackfriars.

A café on the ground floor of Dickens’ former offices at No. 26 Wellington Street near Aldwych. The building housed the author’s offices for his weekly magazine All The Year Round and he also resided in an apartment in the building following his separation from wife Catherine. 26 Wellington Street, WC2E 7DD. Nearest station: Covent Garden.

This 16th century shop was actually named The Old Curiosity Shop after Dickens’ 1840/41 novel of the same name was published, probably in a bid to cash in. However, given that Dickens lived in the area for many years, it is likely he visited it. Regardless, it’s unusual to have such an old shop still in use. The Old Curiosity Shop, 13-14 Portsmouth Street, WC2A 2ES. Nearest station: Holborn. Read Metro Girl’s blog post on the full history of the shop. 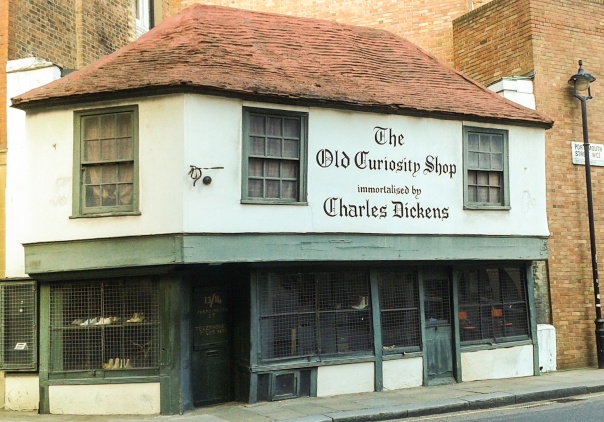 The Old Curiosity Shop in Holborn

The remains of Marshalsea Prison in Borough

A brick wall is all that is left of Marshalsea Prison, where Dickens’ father John was imprisoned for debt in February 1824 when the author was just 12. Two months later, his mother and his three younger siblings also ended up at Marshalsea. Dickens, who was working at Warren’s blacking factory at Hungerford Stairs in Charing Cross at the time, visited them at the prison every Sunday until he was able to move closer at lodgings at Lant Street (the road is now home to a primary school named after him), a few minutes walk away. He used his experiences to write Little Dorrit, where the main character is born at Marshalsea. The prison was closed in 1842, although many of the buildings remained in use by small businesses throughout the Victorian era. Today, Angel Place is an alley running along the brick wall leading from Borough High Street (near the John Harvard Library) going down to Tennis Street (near Southwark Coroner’s Court), SE1. Nearest station: Borough. For the history of the prison, click here.

After leaving Wellington House Academy, Dickens got a job as a junior clerk working in the offices of Ellis and Blackmore at Holborn Court in Gray’s Inn in May 1827. He worked there for 18 months, before leaving to become a reporter. The site of Holborn Court is now known as South Square. To access South Square, you can walk through Gray’s Inn Gate on High Holborn – next to the Cittie Of York pub. South Square, Gray’s Inn, Holborn, WC1R 5HP. Nearest station: Chancery Lane. For more information about Gray’s Inn, visit their official website.

The Holborn Bars building is built on the site of Furnival’s Inn – a 14th century Inn of Chancery which was attached to Lincoln’s Inn. Dickens rented rooms at the Inn between 1834 and 1837, during which time he worked as a political journalist and started to write The Pickwick Papers. Unfortunately, the Inn was demolished in 1897, with Holborn Bars being built on the site soon afterwards. Holborn Bars, 138-142 Holborn, EC1N 2NQ. Nearest station: Chancery Lane. (see a sketch of Furnival’s Inn from 1830).

Dickins and his family lived at 1 Devonshire Terrace in Marylebone from 1839 until 1851. The building was demolished in the late 1950s and now an office block called Ferguson House stands on the site. A mural of Dickens has been carved into the wall, featuring the author and some of his creations, including Scrooge, Barnaby Rudge, Little Nell and Granddad, Dombey and daughter, Mrs Gamp, David Copperfield, and Mr Micawber. 15-17 Marylebone Road, NW1 5JD. Nearest stations: Regent’s Park or Baker Street. (see a photo of 1 Devonshire Terrace in 1957).

The Dickens mural on 15-17 Marylebone Road – the site of his former home 1 Devonshire Terrace, which was demolished in the 1950s

The site of the TGI Fridays restaurant on 6 Chandos Place was one of the two locations of Warren’s Blacking Warehouse, where Dickens had to work 10 hour days to pay for his board after his father John was imprisoned at Marshalsea from 1824-25. Initially, Dickens worked on Hungerford Stairs, near the present site of Charing Cross station, where he earned six shillings a week pasting labels on bottles of boot polish. He later worked slightly north at the site on Chandos Place. Dickins hated his time there, which inspired many of his later tales. Today, a blue plaque is on the TGI Fridays building commemorating him. Nearest station: Charing Cross.