The history of the lone church tower in Wood Street in the City of London.

Marooned: The church tower of St Alban stands in on a traffic island in the middle of Wood Street

World War II caused a lot of damage and destruction to Sir Christopher Wren‘s churches in the City of London. Some were completely destroyed by bombs, while some damage was repairable. In some cases, the main church buildings were beyond repair, while their towers were able to be saved. One such church tower now stands alone, stranded on a traffic island with cars and taxis weaving along tarmac roads in the very spot where the congregation used to sit and pray.

St Alban church tower stands on a traffic island on Wood Street, separating the north and southbound traffic. The road starts north of Cheapside and crosses London Wall. A church has stood on the site since at least 930AD, with some arguing it dates back to the 8th century, during the time of Offa, King Of Mercia (757-796AD). The Anglo-Saxon ruler was believed to have had a palace on the site which included a chapel. Offa founded a monastery and abbey dedicated to Saint Alban (the first English martyr, who died in the 3rd or 4th century) in what later became St Albans, Hertfordshire. Offa also dedicated several churches in the City to the martyr, hence the theory the church went back this far. However, later parish records date the church to 930AD. During King John’s (1166-1216) reign, the church was called St Alban Wuderstrate. Records in the 16th century show the Medieval church included five bells.

By 1633, the church was in a pretty bad state. Architect Inigo Jones (1573-1652), landowner/politician Sir Henry Spiller (1570–1649) and others inspected the building and found it was beyond repair so it was demolished with a new one constructed on the site a year later. After designing the first 17th century St Alban, Jones went on to repair and remodel St Paul‘s Cathedral. However, Jones’s replacement of St Alban’s Church didn’t stand long thanks to the Great Fire Of London in 1666, which destroyed great swathes of the City. 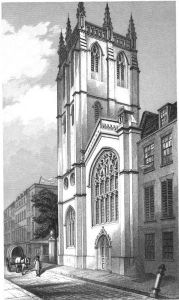 St Alban became one of the many churches rebuilt by Wren after the Great Fire. Construction was completed in 1685 and was fashioned in a late Perpendicular Gothic style at a cost of £3,165. The new building featured piers shaped as clustered columns separating the structure into naves and aisles. At the north end of the church was a bell tower, which stood tall at 92 foot (28 metres) and included two bells. In the 19th century, the church was restored by another acclaimed architect, Sir George Gilbert Scott (1811-1878). Sir George was famous for building St Pancras station and the Albert Memorial and had a fondness for a neo-Gothic style, which would have suited Wren’s original design. Scott added an apse (a semi-circular recess) to the structure during his restoration.

However, around 274 years after the Great Fire Of London destroyed the City of London, this time it was the Nazi bombing campaign. St Alban was hit by a bomb on 29 December 1940, which left the building burnt out and partially destroyed, with only the tower intact. The main church building was eventually demolished in 1955, but it was decided the tower should remain after being designated a Grade II-listed building in January 1950. Today, the bells have long since been removed and the tower was converted into a private building in the mid 1980s.

The church tower was listed in 1950

Read more on Christopher Wren’s churches and other designs

← Revisiting the now-restored Georgian water pump on Cornhill
A king’s country escape… in the middle of Rotherhithe | The ruins of Edward III’s Manor House →
%d bloggers like this: