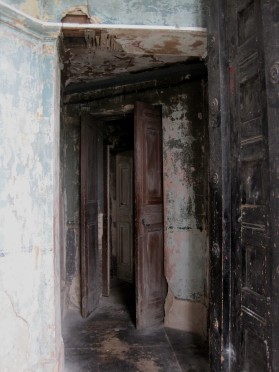 The old creaky doors to the chapel

As Open House London took place this weekend (20-21 September 2014), I joined thousands of Londoners going through the doors of usually private or iconic buildings which are often off-limits to the public, or cost to visit. While some of the buildings I visited this year were more well-known, such as Westminster Hall and Lambeth Palace, I also stepped away from the Open House hotspots of Westminster and the City of London to visit the little-known Caroline Gardens Chapel in Peckham.

Now known as ‘Asylum’, the part-ruined Georgian chapel is now a flexible project space which hosts art exhibitions, concerts and is used for weddings and other functions. The chapel is sandwiched between the almshouses located in Caroline Gardens, on Asylum Road – named for the buildings’ original name Licenced Victuallers’ Benevolent Institution Asylum. Although named an asylum, which immediately makes you assume of a residence for the mentally ill, the site was actually a retirement home for former pub landlords.

The chapel was built in 1827 and 1833, with 10,000 people coming to the opening ceremony of the asylum site. As well as an organ by Messrs Bovington and Sons, the chapel featured stone and marble tablets honouring donors and supporters, most of which still exist today. The Asylum estate was visited by Prince Albert (1819-1861) in 1858 to open the Albert Wing, which added 31 further homes. 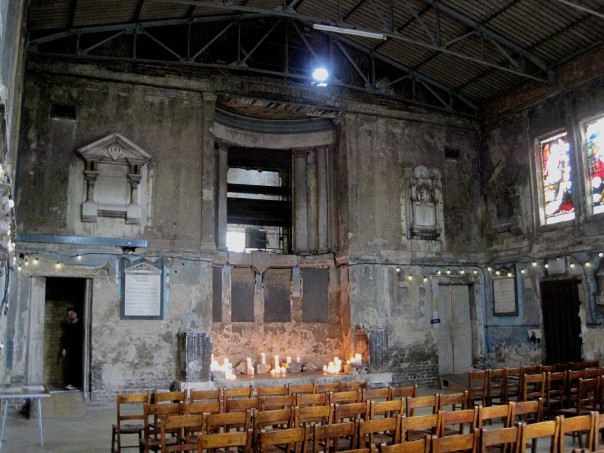 Although the centrepiece of the chapel is gone, the old altar still forms a focal point in the charming derelict chapel 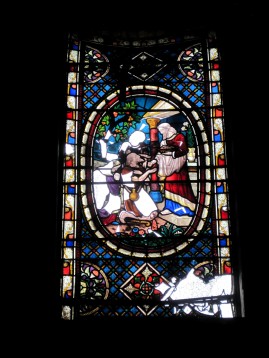 This particular south-facing window has lost of its coloured panes

Sadly, like many homes and buildings in South East London during the war, the chapel was heavily damaged by a bomb in World War II, destroying the roof and west-facing back wall. Although the chapel was made water-tight by the addition of an asbestos-cement roof and filing the crypt with concrete, it soon fell into disuse. The Asylum relocated to Denham, Bucks in 1960 and the almshouses went into ownership of Southwark council. The chapel was briefly used over the decades, but was mostly left derelict. It was only in 2010 that Jo Dennis and Dido Hallett took over the chapel to be used as an arts and entertainment space.

A friend and I visited the chapel early in the morning on the Saturday of Open House. The gardens were a quiet, peaceful place and we were impressed by the chapel immediately upon entry. While I usually champion the restoration of old, historic buildings, the part-derelict state of Asylum is utterly charming. What remains of the altar contains several marble memorials and the lit candles sitting on the cracked and ravaged concrete floor certainly added to the romanticism. The stained glass windows are stunning and in varying states of condition, from good to decaying. Some of the original paintwork – blue and gold leaf still remains along the walls, as well as some inscriptions on the wall honouring some donors. The back wall includes stairs to nowhere… ghostly remnants of the stone steps heading up to where presumably a mezzanine where a choir or extra congregation may have sat. I loved the building and am looking forward to hopefully coming back one day for an exhibition, concert or wedding. 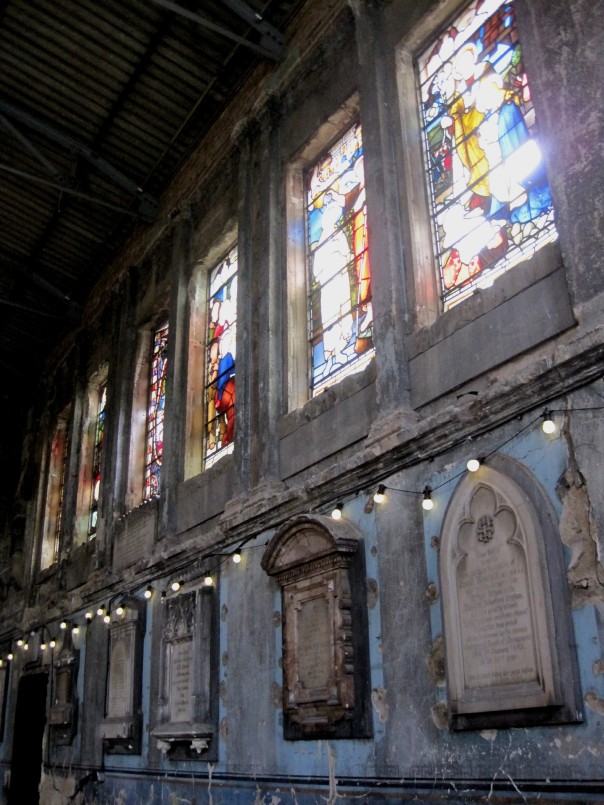