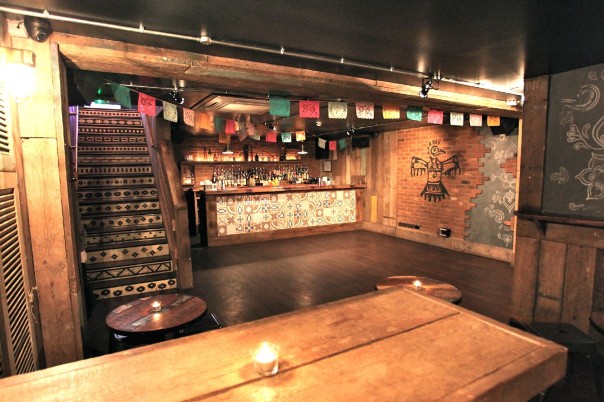 Putney has long been a nightlife hub for South West Londoners. Amid the traditional pubs, chain restaurants and cheesy nightspots, there has been lacking of some cooler venues until now. Thankfully, El Patron is set to change all that. Located just a few moments from Putney station on the Upper Richmond Road, this new late-night Mexican bar will be offering over 60 tequilas, a range of cocktails and authentic street food.

I went to the launch last week and have definitely found a new spot to party at next time I’m in Putney (which is quite often, given I have relatives nearby). Set over two floors, the upstairs part of the venue is a wide, light and airy space with lots of tables for those wanting an informal meal. The menu comprises popular Mexican street food, such as burritos, tacos and quesadillas. Meanwhile, the intimate basement bar’s interiors continues the Mexican theme with its bright wooden shutters and exposed brick with some dancefloor space to shake a tail-feather.

At the launch, we headed straight down to the basement where we treated to a preview of typical weekend revelries that El Patron is expecting to host. Tequila-based cocktails were the main attraction, with the talented bar staff swiftly whisking up concoctions for the thirsty guests. The drinks menu features a mix of traditional Mexican spirits and Latin twists on originals, such as Mariachi’s Martini (Patron XO Cafe, Espresso, Agave and Mozart Dark Chocolate). I went for my favourite Mexican tipple, ‘Tommy’s Margarita’, an icy mix of Arette Blanco, Agave, Lime, with the mixers toning down the tequila so it didn’t blow your head off. My friend opted for the refreshing and delicious Poncho (Arette Blanco, Coconut Kalani Liquer, Lime, Egg White, Peach and Orange Bitters), as she was looking for something a bit more subtle. Other cocktails which caught the eye, (which I will have to return to sample) were Escobar’s Secret (Mezcal, Crème de Mure, Vanilla Syrup, Lime, Apple and Ginger Ale) and, certainly not for the faint-hearted – Scorpion (AquaRiva Blanco, Stones Ginger Wine, Lime, Chipotle, Falernum Liqueur, Ginger Beer and Bitters). In addition to the individual cocktails, which range from £7 to £9.50, there are also large sharing cocktails for big groups who want to share the love.

Open six days a week, weekdays are likely to be a calmer affair for mid-week drinkers and diners, with the venue opening until late at the wilder weekends with music. The house band will perform on Fridays, while DJs will entertain until the early hours on Saturday nights. The atmosphere was lively and unpretentious, with the great entertainment and spirited staff keeping the party vibe going. I’ll definitely be going back for a weekend night out and to sample some of the street food. 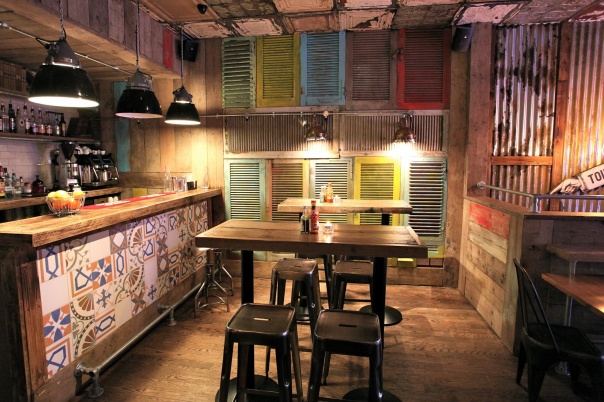