The story of the capital’s many London Bridges, dating back to Roman occupation. 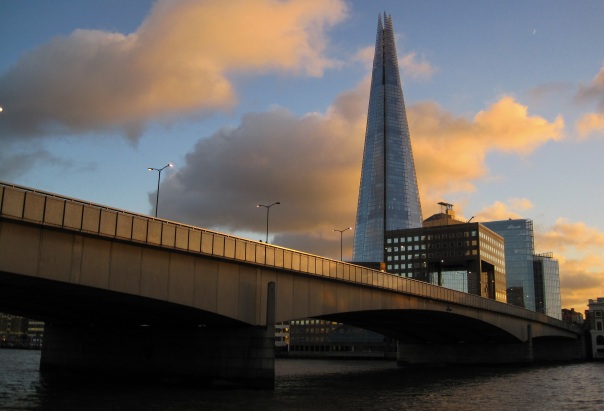 The current London Bridge has been standing since the 1970s, connecting the City with Southwark

Poor London Bridge. It regularly finds its name being misused by tourists thinking it’s actually the grander, more elaborate neighbour downstream Tower Bridge. In fact, when I type ‘London Bridge’ into Google, the Tower Bridge Experience is the first hit so I couldn’t blame London Bridge for feeling somewhat of an inferiority complex. While Tower Bridge is admittedly a lot better looking, it will never have the history and importance to London that the city’s namesake bridge will have.

The current London Bridge has only been crossing the River Thames since the 1970s and is the latest incarnation in a list of bridges which have carried its name. The first river crossing stemmed back to Roman London, with the original being built somewhere in the area of the present site by the invading Roman army of Emperor Claudius (10 BC-13AD) in the 50s AD. The initial bridge was only temporary, with a second permanent one being erected soon after made of wood. The creation of the bridge came as the Roman city of Londinium began to swiftly develop on the site of the current City, with a smaller settlement emerging on the southern end in present day Southwark. When the Romans departed in the 5th century, Londonium was abandoned and the bridge was left to rot. It wasn’t until the 9th century that the Saxons returned to the old Roman City following repeated Viking invasions. The city was ‘refounded’ by Alfred The Great (849-899AD) in 886AD and another river bridge was erected. However, by 1014, the bridge was said to have been destroyed by Olaf II of Norway (995-1030) in a bid to separate the Danish occupants of old London and Southwark. Olaf’s troops were believed to have tied their boats to the bridge supports and rowed away, pulling the bridge down in the process. This leads to one of the theories of the origins of the nursery rhyme ‘London Bridge Is Falling Down’, although others have claimed it dates more recently to the 13th century. After William The Conqueror (1028-1087) claimed the English throne in 1066, another bridge was built on the site, but it didn’t last long and was destroyed by the London tornado of 1091. Believed to be a T8 tornado, it claimed two lives and left the church of St Mary-Le-Bow badly damaged. It was then replaced by King William II (1056-1100), with his incarnation of the river crossing eventually being destroyed by fire in 1136.

Old Medieval London Bridge in 1616, taken from a panorama by Claes Van Visscher. Southwark Cathedral can be seen in the foreground and to the right the heads of executed prisoners above the southern gatehouse.
(Image from Wikimedia Commons) 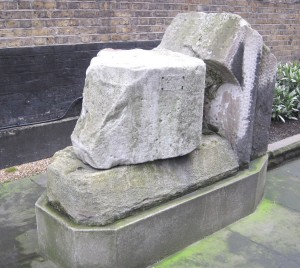 Finally in the 12th century, London Bridge began to be built of stone – a much more hardy material given the amount of natural disasters, fires and war which had ravaged the previous incarnations. In 1176, under the rule of King Henry II (1133-1189), work began on the foundations of the first stone London Bridge. The project was overseen by Peter, a priest and chaplain of St Mary Colechurch (which no longer exists) with funding raised from taxes on wool. The bridge, which is now referred to in history as the Old Medieval London Bridge, took 33 years to complete. When it opened in 1209, it was 274 metres long, six metres wide and featured 20 Gothic arches. By this point, King Henry II had already died and his heir, King John (1166-1216) ended up leasing plots on the bridge to fill the deficit in a bid to recoup the huge costs of the build. The bridge featured gatehouses at each end and a drawbridge near the Southwark entrance to allow bigger ships to pass through. Owning a business on London Bridge was quite the draw and by 1358 it was seriously overcrowded, with a whopping 138 shops spanning the River, with some buildings as many as seven stories high. The encroaching plots meant the actual road was reduced to just four metres so it was quite a squeeze for carts, horses and livestock. Unsurprisingly, the resulting traffic was so bad, it could take up to an hour to cross the bridge. In addition to congestion, the cramped living and shopping quarters were also a hazard. In 1212, fires broke out at both ends of the bridge, causing an estimated 3,000 deaths. By 1381, there were more fires on the bridge during the Peasants’ Rebellion and further still in 1450 during Jack Cade’s rebellion.

As well as numerous fires, the bridge was susceptible to damage and ageing and was frequently repaired. Parts of the bridge collapsed in 1281, 1309, 1425 and 1437, the first blamed on expanding ice from the frozen River Thames during a particularly harsh winter. Each time the bridge was damaged, it was repaired again. In contradiction to the Norse origin of ‘London Bridge Is Falling Down’, the other theory is the song was referring to Eleanor of Provence (1223-1291), the queen consort of King Henry III, who was very unpopular with Londoners. Many accused her of misappropriating the bridge maintenance fund for other means and she was even attacked coming down the Thames on her barge in 1263 and had to be rescued by the then-Mayor of London.

Meanwhile, London Bridge was more than just a Medieval shopping mall and river crossing, it had a rather more grim association for 355 years. When Scottish freedom fighter William Wallace was hung, drawn and quartered in 1305, his head was dipped in tar and placed on a pike above the southern gatehouse. This gruesome display served as a warning to citizens to obey their king and the country’s laws, and became a tradition until 1660 following the restoration of King Charles II (1630-1685), when it was finally abolished. Over the decades, the heads of Wat Tyler, Jack Cade, Sir Thomas More, Thomas Cromwell, Bishop Fisher and Guy Fawkes were all stuck over the gatehouse. Six years after this gross practice came to an end, London was famously ravaged by the Great Fire in September 1666. However, it turned out the previous fires the bridge had experienced actually saved it, as a gap between buildings acted as a fire break.

By the 18th century, the traffic situation on London Bridge had reached crisis levels. In 1722, the Lord Mayor imposed a new rule that traffic should keep to the left, the first time such a rule had been made and is now long enshrined in law for vehicles in this country. Forty years later, congestion on the bridge was relieved somewhat when an Act of Parliament ordered all buildings across it to be demolished. However, these improvements couldn’t turn around the fortunes of what a modern day council would declare to be a ‘failing building’ and it was decided a new bridge was needed. Scottish engineer John Rennie (1761-1821) won the competition in 1799 with his design of five stone arches. However, building didn’t start until 1824 with the foundations being laid 100 feet west of the old Medieval bridge. Following Rennie’s design, the 283 metres long and 15 metres wide bridge was made from Haytor granite and constructed by Jolliffe and Banks under the supervision of the then-late Rennie’s son John (the younger, 1794-1874). The movement of the bridge upstream meant new approach roads had to be built which added to the £2.5million cost. The new location meant the church of St Magnus the Martyr was no longer the first building people passed by when they entered the City of London. The new bridge was finally opened on 1 August 1831 by King William IV (1765-1837) and Queen Adelaide (1792-1849). During the building, the old bridge had remained in use and was demolished once its replacement had been opened. Rather disrespectfully, during demolition the bones of Peter de Colechurch (who masterminded the building of the Medieval bridge and had been buried in its old chapel) were found and tossed into the Thames. Some of the features of the old Medieval Bridge were sold off and some of the stone alcoves can still be seen today in Victoria Park in East London and in the grounds of Guy’s Hospital, just south east of London Bridge.

Underneath the arches: Looking under one of the three concrete box girders

Over the subsequent decades and despite opening of other bridges, London Bridge was one of the busiest parts of the whole capital. City bosses managed to widen the bridge in 1902-04, however subsequent surveys over the early 20th century showed the bridge was sinking an inch every eight years. The local government knew the bridge wasn’t up to the demands of growing London and its traffic. (Watch 1960s footage by British Pathe of London Bridge in rush hour). In 1967, the Common Council of the City of London decided to look for potential buyers after council member Ivan Luckin suggested putting it up for sale. In April 1968, American businessman Robert P McCulloch bought it for just over £1million. There’s an urban myth that McCulloch thought he was buying the grander Tower Bridge instead, but this was denied at the time by Luckin. Rennie’s bridge was then taken apart and shipped over to the newly-built Lake Havasu City in Arizona, USA, where it still stands today. (Watch footage of the Lord Mayor of London, Sir Peter Studd, travelling to Arizona for the official opening of the bridge in 1971).

So last, but not least, we come to the current modern London Bridge, which was designed by British architect William Holford (1907-1975) and engineers Mott, Hay and Anderson. The bridge comprised of three spans of prestressed-concrete box girders and is 283 metres long and 32 metre wide. It took five years to build at a cost of £4million and was opened by Queen Elizabeth II on 17 March 1973. Despite its grand history (or at least its predecessors which bared its name), London Bridge is now one of the youngest spanning the Thames. However, with the opening of the Millennium Bridge and plans for new crossings in Vauxhall and Temple, it won’t look so ‘young’ after all.

Colourful: London Bridge lit up in orange and blue during the London 2012 Olympics