← Creative cuisine, desserts and cocktails at London’s latest dining concept POP-Down
Alfresco drinking and dining with a bit of glamour at the London Riviera pop-up →

Scotch & Soda review: A cheeky, energetic and skilful blend of music and circus 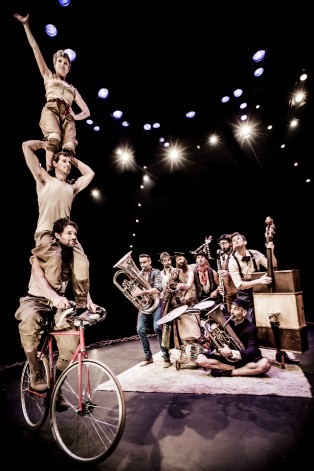 Headlining this summer’s London Wonderground is Scotch & Soda, a fusion of circus and jazz. The show takes place in the atmospheric Spiegeltent, which really gives a fringe festival vibe. The production features Ben Walsh and the Crusty Suitcase Band, who provide the music while Company 2’s acrobats perform death-defying feats.

At the heart of the show is The Crusty Suitcase band, who perform a sort of hillbilly jazz on a mix of traditional and quirky instruments. Company 2 is an ensemble of Australian circus artists who previously brought the hugely successful show Cantina to Wonderground in 2012. The band and acrobats have taken on characters inspired by the Australian outback and historical circus acts. While the other characters weren’t so clear to me, Mozes is suitably bizarre and eccentric as The Bush Stranger, who kick starts the laughter by flashing the audience, while whizzing around in his clog-style roller-skates.

The premise of the show is a hillybilly, Victoriana get-together over a few drinks and music with the ‘party tricks’ on a whole different level to what we’ve seen before. The tricks start on a small scale with Chelsea McGuffin walking a ‘tightrope’ made of champagne bottles, before building in size and grandeur. There were many moments during the show when I held my breath in anxiety as the performers were suspended from the trapeze or balancing precariously on a huge pile of boxes. I was awed by the strength of the acrobats as the female performers supported the weight of Mozes hanging off them on the trapeze or David Carberry carrying two acrobats on his shoulders while cycling. An interlude from the fast-paced action with a bird act was cute, but a bit underwhelming in comparison to the rest of the show.

Overall, the 70 minute show flew by thanks to musicians and circus artists, who complemented each other well and had a great sense of camaraderie that spread to the audience. The show certainly livened me up on a Friday evening after a long and tiring week at work. Whether or not you’re a circus aficionado, few couldn’t fail to be won over by Scotch & Soda’s cheeky, energetic and skilful brand of music and mastery.

← Creative cuisine, desserts and cocktails at London’s latest dining concept POP-Down
Alfresco drinking and dining with a bit of glamour at the London Riviera pop-up →
%d bloggers like this: