Immersive theatre and cinema has been steadily growing in popularity in London in recent years, with Secret Cinema and Punch Drunk two stellar examples. With the 150th anniversary of Lewis Carroll’s masterpiece Alice’s Adventures In Wonderland this year, theatre company Les Enfants Terribles have created an immersive journey into Wonderland in the vaults below Waterloo station. 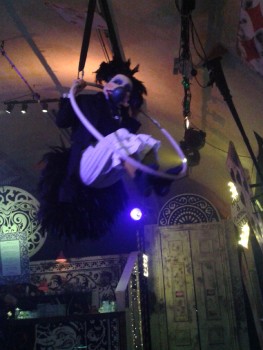 A dodo acrobat in the Wonderland bar

My friend and I paid a recent visit on a Sunday afternoon. It’s admittedly a bit tricky to review as different groups have totally different experiences and I wouldn’t want to ruin it for any potential visitors so I will try to give a flavour of what to expect. Photos aren’t allowed (except in the Wonderland bar afterwards) so you are free to fully immerse yourselves in the experience without the distraction of cameraphones.

After arriving 15 minutes before our allotted time, we were put into a large group and shown into a dark, messy room full of Victoriana – the study of Lewis Carroll. It isn’t long before we were given the choice of ‘Eat Me’ or ‘Drink Me’, splitting the group in half. We chose ‘Eat Me’, so ended up going through a special door. It wasn’t long before our groups are split in half again. As our journey continued, we were taken from room to room where we met characters from Wonderland, including the White Rabbit, the Playing Cards and a female version of Tweedle Dee and Tweedle Dum. Throughout the experience, there is plenty of opportunities for interaction with the residents of Wonderland. I had a brief exchange with Alice, while my friend spoke to one of the Hearts playing cards.

One of the highlights was the Mad Hatter’s Tea Party – where all our original group were reunited for a fantastically chaotic tea party with the Mad Hatter, the March Hare and the sleepy Dormouse. My friend and I admitted we wished we had our cameras because it was such a fantastic sight. After finally getting the chance to see the terrifically scary Queen Of Hearts at the climax of show, we emerged into the atmospheric Wonderland Bar. The bar serves suitably themed cocktails and nibbles, but is also open late on Fridays and Saturday with live music and DJs.

My friend and I totally loved the show. It was a surreal and entertaining experience. The cast were brilliant and it is really down to them that the theatrical journey was so real. I was a fan of Alice In Wonderland when I was younger and the production really made me feel like a child again.

← Alfresco drinking and dining with a bit of glamour at the London Riviera pop-up
Where to watch Wimbledon on the big screen in London this summer 2015 →
%d bloggers like this: