The history of two Georgian terraces overlooking The Mall.

At Open House London this weekend (19-20 September 2015), The Royal Society are opening the doors to their headquarters for tours. The UK’s national science academy has been based at 6-9 Carlton House Terrace since 1967. However, their HQ was originally separate houses with an interesting history dating back nearly 200 years. I visited during Open House London last year and was charmed by the varied layers of history within the building.

The Wolfson Library, in what used to be No.6, features a spectacular ceiling and was used at the turn of the 20th century for lavish parties

Carlton House Terrace is a road comprising of two Regency terraces (Nos.1-9 on the west side, Nos 10-18 on the east) in a Roman classical style designed primarily by London-born architect John Nash (1752-1835), with input by Decimus Burton (1800-1881), among others. The road’s name refers to the site’s former royal residence Carlton House, which was demolished on order of its former resident King George IV (1762-1830) when he moved into nearby Buckingham Palace. The King wanted to give the site to the public on the condition new dwellings for the upper classes were erected on the site. Nash’s original idea was to link the two terraces with a large fountain, but the King vetoed his plans so the flight of stairs down to The Mall were built instead. The four-storey terraces were built between 1827 and 1832, with the Duke Of York column erected in between the blocks in 1834 in memory of the King’s younger brother Prince Frederick (1763-1827).

While the houses have changed and some have been merged over the years, only a small portion of Nash’s original interiors still exist. In what used to be No.7, Nash’s Staircase is still in situ, featuring white and blue wood panelling and wrought iron bannisters. It’s a small, but fine display of Nash’s regency interior style, of which hardly any examples exist these days due to it falling out of fashion.

The stunning mother of pearl detailing on the first floor ceiling of what used to be No.6

The houses remained as homes for around 100 years, with Prime Ministers Lord Palmerston, Earl Grey and William Ewart Gladstone among the high-profile residents. American millionaire Charles Henry Sanford, who lived at No.6 in 1890-91, had the house madeover in an opulent Italianate style when he moved in. Today, his stunning marble staircase and ceiling – featuring carved timber and mother of pearl inlays – can still be seen. Upstairs, the Wolfson Library features gold leaf detailing and a painted ceiling and was formerly used as a ballroom for lavish parties at the turn of the 20th century, hosted by American Mrs John W Mackay, who lived at the residence between 1892 and 1920. The Milwaukee Journal wrote of her abode: ‘Her beautiful house in Carlton House Terrace is always open and her gracious hospitality is chronicled by foreigners and her own countrymen.’ 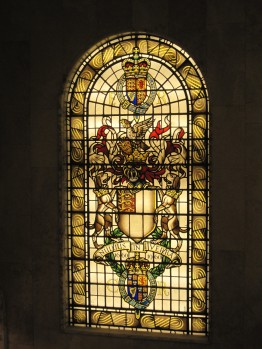 The Royal Society’s crest is depicted on stained glass window

Meanwhile, No.8 and 9 were merged from 1923 and were used as the German Embassy, with German Ambassador Joachim von Ribbentrop (1893-1946) in residence from 1936-1938. He went on to become the Foreign Minister of Nazi Germany from 1938 and throughout World War II. During his time in London, he was under orders from Hitler to negotiate an Anglo-German alliance, but completely failed to understand the workings of British politics and the monarchy, wrongly believing King Edward VIII (1894-1972) could dictate foreign policy. While in the capital, he hired an interior decorator Martin Luther (1895-1945), from Berlin, to bring over his furniture from Germany and re-design the interiors, including Third Reich doorknobs, which can be seen today in the Council Room.

Current residents, The Royal Society, were originally founded in 1660 by a group of scientists, including architect Sir Christopher Wren and were given a royal charter by King Charles II. TRS moved in to Carlton House Terrace in 1967 after outgrowing their previous site at Burlington House in Piccadilly, where they had been since 1857. The four houses had been converted into one seamless building by William Holford and Partners, with the stained glass window from Burlington House depicting the Society’s crest.

The back of Carlton House Terrace looks out over The Mall 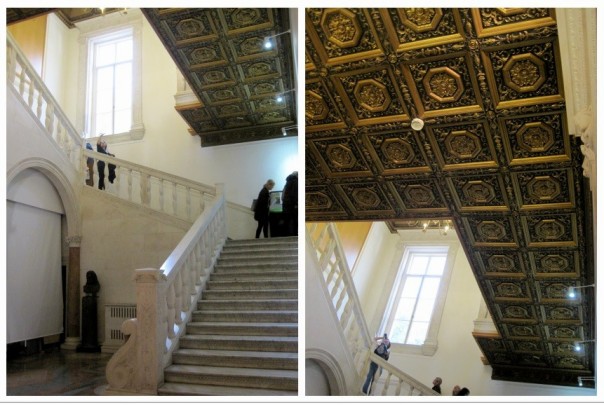 The Marble Hall and President’s Staircase were installed when American millionaire Charles Henry Sanford lived at No.6