← Guide to what’s on in London in October 2015
London Cocktail Week 2015: Tips and highlights of this year’s celebration of mixology →

It’s what’s inside what counts! Visiting the Sky Garden at the ‘Walkie Talkie’ 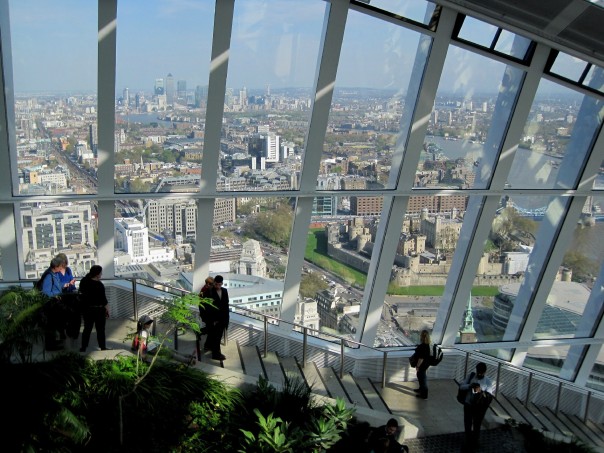 20 Fenchurch Street, aka as The Walkie Talkie, is one of London’s most controversial buildings. During construction, it hit the headlines in summer 2013 after the building ended up channelling the sun’s rays into a powerful beam, which singed mats and melted cars parked on the streets below (this has since been rectified!). While most of the building is dedicated to offices, the top floors feature a garden, a bar and two restaurants. Since opening in January 2015, the restaurants and bars have been mostly well received, but the structure itself hasn’t been embraced by most Londoners as a prominent piece of the skyline. In September 2015, it was awarded the Carbuncle Cup for being the worst new building in the UK.

Designed by architect Rafael Viñoly, 20 Fenchurch Street stands tall at 160 metres. It’s the fifth tallest building in the City of London so shorter than the nearby 30 St Mary Axe, aka The Gherkin (180 metres), Tower 42 (183 metres) and 122 Leadenhall Street, aka The Cheesegrater (225 metres). But what is lacks in height, it more than makes up for width wise with its decidedly ‘top heavy’ design. The tower was controversial from the planning stages, with many concerned how the building would impact on the City’s skyline and views of iconic architecture such as St Paul’s Cathedral. The designs were granted permission because it promised a free public garden on the top.

Enjoy views of the River and The Shard

Personally, I’m not a fan of the building architecturally. Although when I paid a visit, I did enjoy the inside of it. Alongside the other skyscrapers of the City, the Walkie Talkie is just too big and dominates the view. However, going inside, you can’t deny there’s a great vista. There’s two ways of getting up to the top of the building – either book a table at the Darwin Brasserie, Fenchurch restaurant or Sky Pod bar or apply for a free slot to visit the Sky Garden.

Arriving at the base of the Walkie Talkie, there is the airport security-style scanners that is typical in most skyscrapers. Visitors to the Sky Garden may need to queue a bit, although diners with reservations are able to bypass the queue to the lift. Exiting the lift on the 35th floor, you are greeted by huge windows on the façade of the building, with a balcony overlooking the Thames and The Shard across the river the dominant view. The Sky Pod bar is open for walk ups and serves cocktails and light snacks.

Turning north, you are faced with east and western terraces of garden spanning three storeys. In the middle are the two restaurants – Darwin and Fenchurch – in boxes, which have been compared by some to Portakabins. The horticultural display features Mediterranean and South African plants, giving a greenhouse feel. On the day I visited it was sunny, but hazy so the views were pretty good. However, the position of the sun made it difficult to take photos due to the reflection on the glass. Despite there being up to 200 people in the Sky Garden at a time, the huge expansive space means it doesn’t feel too crowded – except on the balcony where there were security guards controlling numbers. There’s plenty of seating both near the bar and on the terraces so you can sit amidst the greenery and enjoy a spot of nature in the middle of the city. 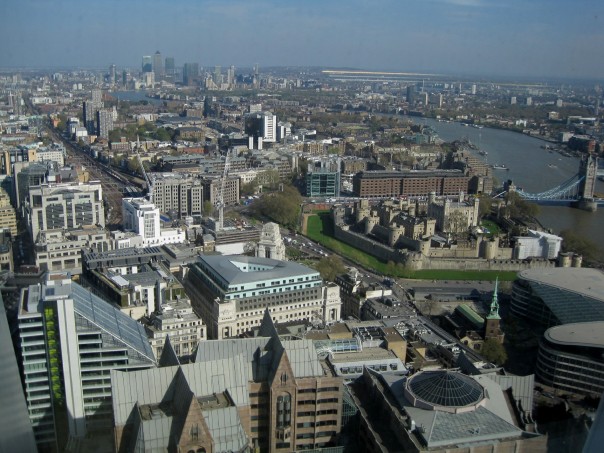 Nice view! Looking east towards the Tower Of London and Docklands

For a review of the Darwin Brasserie in the Sky Garden, click here.

← Guide to what’s on in London in October 2015
London Cocktail Week 2015: Tips and highlights of this year’s celebration of mixology →
%d bloggers like this: