‘Roman’ bath at The Strand: What the Dickens is the history behind this old watering hole?

Down a small side street near the Aldwych campus of King’s College is an extraordinary piece of hidden London.

Known as the ‘Roman’ Bath on Strand Lane, the building is rarely open to the public. I visited a few months ago during Open House London and found the origins of the baths weren’t quite as romantic as they sounded. At one point there were two baths on the site – named ‘Essex’ and ‘Roman’ respectively, however it is the latter (which is also the oldest), that can be seen today.

The doorway to the old ‘Essex Bath’ – built in the 18th century – is now blocked off, although the Dutch tiles can still be seen

Thanks to centuries of redevelopment, bombing and fires, there isn’t much left of Roman London today. Within the borders of old Londinium, we have some of the Roman wall at Tower Hill, the remains of the Amphitheatre at Guildhall and an old bathhouse at Lower Thames Street. While the bath at The Strand continues to be named ‘Roman’, it turns out it is significantly younger than two millennia.

Recent research by historians at nearby King’s College London has found the bath was originally constructed in 1612 as a feeder cistern for an elaborate fountain in the gardens of an earlier incarnation of Somerset House (prior to the current building, which dates back to 1796). At the time, the house was the residence for Anne of Denmark (1574-1619), Queen Consort of King James I of England (1566-1625). Following their deaths, it is believed the fountain was demolished around 1630 during extensive remodelling under the reign of their son King Charles I (1600-1649). This research by Professor Michael Trapp and Dr Kevin Hayward rejects an earlier theory the bath was a spring water reservoir for Arundel House, home to Thomas Howard, 21st Earl Of Arundel (1586-1646).

The ‘old water-house’ – as it was then described – was out of use until the 18th century, when at some point it was converted into bathing facilities. In November 1776, a newspaper advertisement declared ‘the Cold Bath, at No. 33, Surry-Street, in the Strand, is now open’. Two years later, the owner James Smith extended his facilities to include a second bath with separate entrances for males (on Strand Lane) and females (on Surrey Street). This second facility was named the ‘Essex bath’, with a wild claim that it was built by Robert Deveraux, 2nd Earl Of Essex (1565-1601), a favourite of Queen Elizabeth I (1533-1603). Today, you can see the blue and white Dutch tiles – formerly of the Essex bath – in the entrance hall to the Roman bath.

Victorian signage for the baths, suggesting they date back to the era of Titus or Vespasian 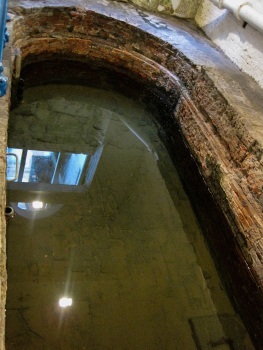 Romantic: It is believed the Victorians came up with the bath’s so-called Roman origins to drum up business

The baths continued to be used throughout the late 18th century and most of the 19th century. It wasn’t until the 1830s that the Roman association began to be used. It is believed the proprietor Charles Scott may have concocted an ancient angle to the bath’s history to drum up business. The bath’s so-called Roman origins were endorsed by authors Charles Knight and Walter Thornbury in their books on London. Describing the layout of the bath in his book London (published 1842), Knight wrote: ‘…layers of brick of that peculiar flat and neat-looking aspect which certainly seemed to imply the impress of Roman hands.’ Charles Dickens even mentioned the bath in his 1850 novel David Copperfield, with the lead character recalling ‘there was an old Roman bath in those days at the bottom of one of the streets out of The Strand – it may be there still – in which I have had many a cold plunge’.

In 1893, the ‘baths’ were to become just one again when the complex was bought by businessman Henry Glave, who swiftly sold off No.5 Strand Lane and the Essex bath to the owner of the neighbouring Norfolk Hotel (now the site of Kings College’s Norfolk Building), who wanted to extend. Glave salvaged the tiling and marble cladding from the Essex bath and transferred it to the Roman bath, and continued to open the latter to the public as a tourist attraction, with occasional bathing available (1906 photo of the Roman bath). Meanwhile, the Essex bath was covered over and is now hidden under the floor of King’s College’s geography department.

Popularity of the Roman bath dwindled after World War I. It was bought in 1922 by the rector of nearby St Clement Danes church, the Reverend William Pennington-Bickford for £500. He had fallen hook, line and sinker for the tale of the bath’s ancient origins and became convinced there were further Roman remains surrounding the bath, such as a villa. He stripped off Glave’s tiling in a bid to expose the ‘original’ Roman masonry. Unfortunately, his elaborate plan never got off the ground and he died shortly after St Clement Danes was bombed during the Blitz in May 1941. The bath was offered to the National Trust, whose research soon established it was certainly not Roman. The bath can be visited on the Somerset House: Old Palaces Tour on Tuesdays or during Open House London in September. Alternatively, if Strand Lane is open (it is often blocked off by gates), you can see the bath through a small window.

Drawing of Roman Bath in the Strand by John Wykeham Archer, 1841. Featured in ‘Mediæval London’ by William Benham and Charles Welch, 1901.
(Image from Wikimedia Commons)

To find out more about Open House London, click here.

For a guide to Charles Dickens’ London, click here.

← Happy New Year! A look back on Metro Girl’s 2015 of blogging
London A Cappella Festival 2016: World class vocal groups brighten up January →
%d bloggers like this: