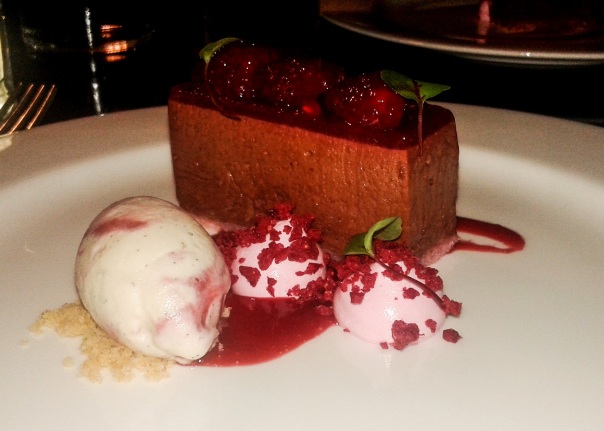 The Hotel Café Royal is an iconic venue in London’s West End, having been reopened as a five-star hotel in 2012. As you would expect, the hotel features several dining and drinking options, including Ten Room, its informal all-day dining location. Recently, I ventured along with a close pal for a celebratory dinner, booking a set menu through its website. 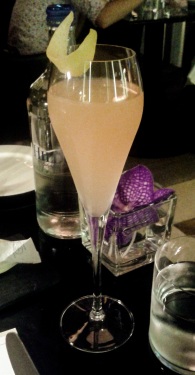 Entering the restaurant, we were greeted by an expansive dining room overlooked by an atrium balcony. While I liked the Art Deco feel of the place, it felt somewhat too lofty a space so lacked cosiness. On the night in question, the restaurant was rather quiet, with only a few other couples dining. We were shown to a small table for two – perhaps a bit too small as it was a bit of a squeeze for all our glasses and dishes during the meal, but very comfortable leather seating.

To begin, I ordered a champagne cocktail as an apéritif which was a generous size and mixed with fruit so was refreshing for the palette. I was in the mood for soup, so started with the Red Pepper Soup with Tomato and Basil, while my friend had the Salmon Rilette, Crispy Quail’s Egg, Potato and Mustard. My soup was comforting and warm, with flavours just the right subtlety as I was wary of the pepper being overpowering. I tried a bit of my friend’s Salmon and it tasted lovely, making me wish I had ordered that instead.

For mains, I opted for the Artichoke and Truffle Risotto which was nice enough but I would have preferred more flavour. I find I can get bored with Risotto after a while so perhaps I should stop ordering it in restaurants. I somewhat envied my pal’s choice of Seared Cod with Broccoli, Anchovies and Chili, which she enjoyed, saying the Chili gave a good kick to usually plain taste of Cod. 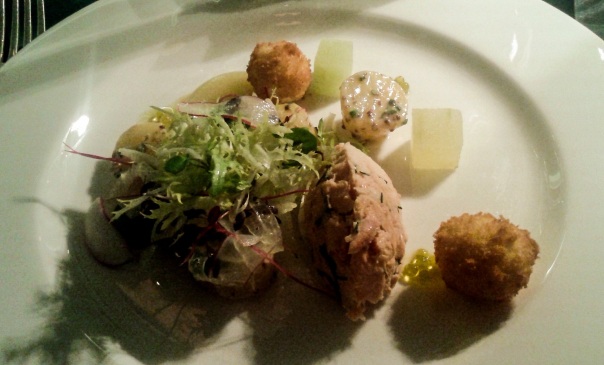 Admittedly, both of us found the dessert the highlight of our meal and reminded us of our schooldays. We both decided on the Raspberry Ripple Chocolate Mousse which was absolutely heavenly. I loved raspberry ripple ice cream as a kid and for some inexplicable reason had forgotten its existence over the past decade or so. The sweet raspberry flavour cutting through the chocolate was divine and had us both in raptures.

The service throughout was good – friendly with just the right balance of attentiveness. Overall, the meal was fairly good although I expected more. My starter and main were nice enough, but the dessert and the service were really what made the meal. 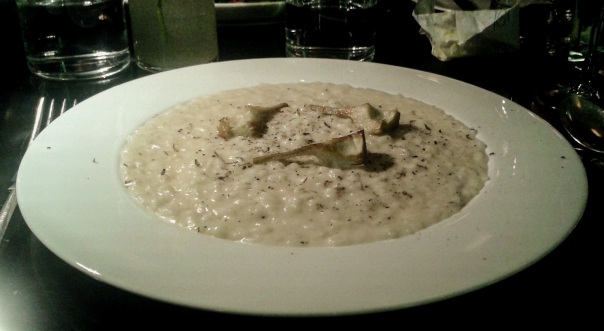