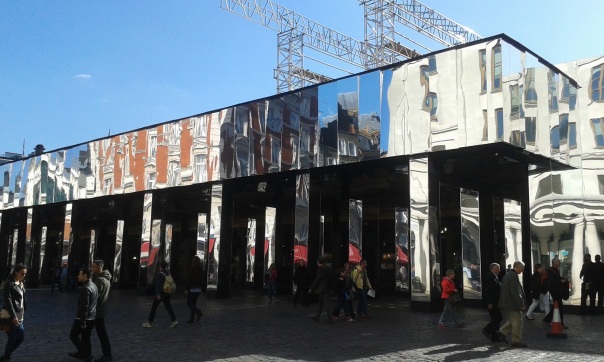 Covent Garden is one of the most popular parts of London, a draw to tourists and city-dwellers alike for its shops, restaurants, entertainers and history. The 19th century market hall has seen many businesses come and go and is ever evolving with the changing demands from consumers. Following the opening of The Ivy Market Grill in late 2014, another fine dining establishment is coming to Covent Garden next year – a second London branch of SushiSamba. Taking over the former Opera Terrace restaurant, work has begun on transforming the north-east corner of the neo-classical market hall into the capital’s latest dining establishment.

While Londoners are used to seeing unsightly scaffolding during the frequent building works around town, the renovation for SushiSamba is going to be rather more gentle on the eyes. Launched this month is a new installation entitled Reflect London, which will conceal building works on the Grade II-listed building. The columns and façade of the building have been wrapped in 32,000 square feet of mirrored surfaces, giving a new perspective of the building and its surrounding environment.

For a review of the original London branch of SushiSamba in the Heron Tower, click here.

← Fashion talks: Discounts, freebies, shopping and more as Carnaby Style Night returns for 2016
The Ferryman’s seat: A hidden piece of Bankside’s history →
%d bloggers like this: