← The Ferryman’s seat: A hidden piece of Bankside’s history
Guide to what’s on in London in May 2016 →

Food for thought: Borough Talks with chefs and foodies returns to Borough Market 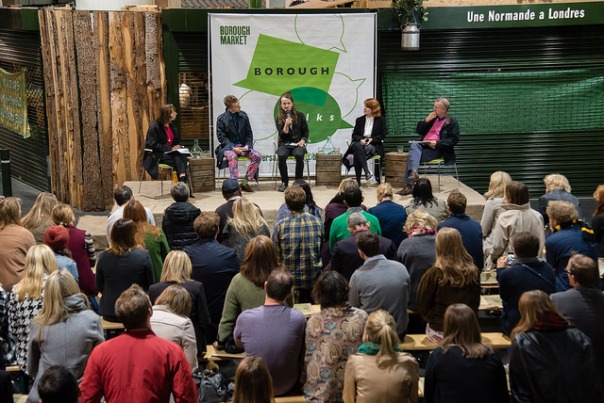 Calling all London foodies! Returning to the capital’s historic Borough Market this spring/summer is ‘Borough Talks’, a series of after-hours discussions and panels from celebrity chefs and food experts. Names including Michelin-starred chef Pierre Koffman, broadcaster Jay Rayner, cookery writer Claudia Roden and food stylist and writer Olia Hercules will be sharing their experiences of the international food scene.

Keith Davis, managing director, Borough Market, said: ‘As London’s oldest food market, we have always been a place where people come together to connect over food. These talks give us a chance to engage with visitors on a deeper level and discuss the wider topics that impact the food landscape around us. The talks also give people an opportunity to hear from innovators and thought leaders in the industry, up close, in a wonderful, intimate setting.’

Get exclusive tips and tricks about how to start the next big culinary sensation from some of the industry’s most successful food entrepreneurs. Panellists Jenny Costa, founder of Rubies in the Rubble; Bonnie Chung, founder of Miso Tasty, former food blogger and secret supper club pioneer; Jordan Frieda, co-owner of London restaurants Trullo and Padella and Claire Ptak, owner of east London bakery Violet, will talk about what it takes to create a successful food business in modern Britain.

14 June: Cookbook writer and cultural anthropologist Claudia Roden will sit down with Boyd Tonkin, senior writer at The Independent, to give the audience a glimpse into her life as a pioneering food writer, and the role she has played in revolutionising Western attitudes towards other cuisines.

28 June: Michelin-starred chef Pierre Koffmann will share stories from his 50 years working in the industry with Bloomberg’s chief food critic, Richard Vines. Audiences will get a taste of Koffmann’s life as a young chef in Strasbourg and Toulon before he went on to open La Tante Claire, launching his meteoric career in London.

A debate on the role of food as a catalyst for social change. Tristram Stuart, campaigner, author and founder of Feedback will be joined by Rosie Boycott, Chair of the London Food Board and food advisor to the Mayor of London, Arthur Kay, designer, entrepreneur and founder of Bio-bean, and Roberta Siao, the Brazilian chef who oversees pop-up restaurant and social enterprise Mazi Mas. Questions will focus on whether a shared love of food can transform lives and regenerate communities.

Renowned restaurant critic and author Jay Rayner will discuss how British food has evolved with Isaac McHale, chef owner of The Clove Club. Moderated by writer, broadcaster and restaurateur Tim Hayward, the panel will also include Executive Chair of Slow Food UK, Shane Holland and award winning author and Fortnum & Mason food writer of the year, Sybil Kapoor. Find out how Britain went from its famed bad cooking to being one of the world’s most open, exciting and innovative sources of good food.

Posted on 29 Apr 2016, in Activities, Grub, London and tagged Borough Market, foodie. Bookmark the permalink. Comments Off on Food for thought: Borough Talks with chefs and foodies returns to Borough Market.

← The Ferryman’s seat: A hidden piece of Bankside’s history
Guide to what’s on in London in May 2016 →