← Canalway Cavalcade 2016: A festival on the waterways of Little Venice
Roman Fort West Gate ruins | A tiny bit of Londinium… hidden in a car park →

Victorian Bath House review: Step back in time for exotic cocktails in one of London’s subterranean hideouts

I’m always on the lookout for something a bit different when it comes to London nightlife. The latest new opening in the City definitely has that unique feeling. Situated in a churchyard just off bustling Bishopsgate is a 19th century Turkish bath house, now open as a new bar, restaurant and event space called Victorian Bath House. 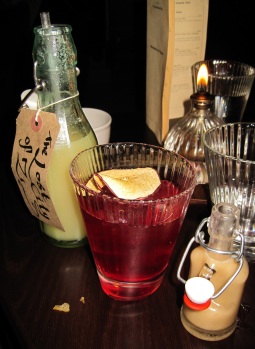 Bottled From The Lost City Of X (left) and Craven & Dunhill Ceramic Duo, served with a mini bottle of Peanut Butter Rum to add

The bath house was originally built as an underground palace of relaxation and hygiene, opening in February 1895. Designed by architect G Harold Elphick for Victorian entrepreneur James Forde Neville and his brother Henry, the bath house was narrow so it could fit between two 19th century office buildings – now long gone. With Turkish baths being all the rage at the time, the Bishopsgate ones were a huge hit with the public, who loved their marble floors, hot rooms and mosaics. The tiles were designed by Elphick and specially made at Craven Dunnill in Shropshire. The baths managed to survive the Blitz, but closed in 1954. Over the decades, the Grade II-listed building was used for various restaurants, a nightclub and storage space, before it was reopened as the Victorian Bath House in April 2016.

Today, the space is used primarily for special events, with the bar open ‘By Appointment Only’ from Thursdays to Saturdays. Last month, two friends and I booked a table on a Friday night to experience a night of decadence down below the streets of London. Walking into the courtyard, your eyes are immediately drawn to the Moorish pavilion entrance to the Bath House with its onion-shaped cupola and terracotta tiling. It certainly stands out among the modern, uninspiring office blocks surrounding it. After checking in our coats, we stepped down the winding, tiled staircase to the main bar – split into two rooms. A lot of the original tilework is still in situ, with the modern, Moorish-style furnishings complementing the interior. Low glass lamps and oil burners certainly made the bar very atmospheric. 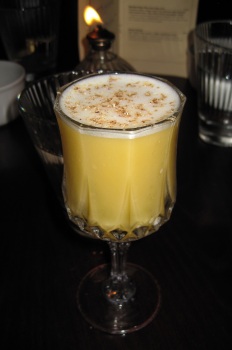 The menu features a range of wine and cocktails inspired by Victoriana with a modern twist. Of course, gin being the 19th century tipple of choice, it features prominently on the menu, with different flavoured gins available so you can mix your own cocktail. In a throwback to the building’s original use, the ‘Wash, Rinse… Repeat’ is a mini bath tub served with mini cocktail bottles to make your own boozy bath water. However, I started with the ‘Craven & Dunhill Ceramic Duo’, two versions of Peanut Butter Rum to mix to your own taste. Despite being a fan of peanut butter and rum separately, I wasn’t sure how well they would work together, but it was sweet and had a nice kick. Clearly I was in the mood for something sweet, so next I ordered the ‘Rhubarb Flip’, a smooth combination of Egg Yolk, Rhubarb Vodka and Granulated Sugar, which was thick and delicious. Meanwhile, my friends tried the intriguingly named ‘Bottled From The Lost City Of Z’ – a glass bottle filled with Coconut Water, Sugar Cane Rum infused with Almond, Pink Peppercorn, Rose Water and Fresh Pineapple, which they said was nice and refreshing. Served in a bottle with a straw reminded us of drinking school milk.

The evening was thoroughly relaxing with the setting really bringing a different dimension to what would be a typical Friday night social practice. The service was excellent and we found the waiters very informative and friendly. The drink menu was certainly imaginative and unique, which would really put cocktail and gin aficionados in their element.

‘Roman’ bath at the Strand | What the Dickens is the history behind this old watering hole?

If those tiles could talk! The remains of Queen Caroline’s bath in Greenwich Park

Visit the ruins of a Billingsgate Roman bath house

The one tube you CAN drink on! Head underground for post-war frolics at Cahoots

Posted on 5 May 2016, in Architecture, bars, History, London, Nightlife and tagged 19th century, cocktails, gin, subterranean, Victorian. Bookmark the permalink. Comments Off on Victorian Bath House review: Step back in time for exotic cocktails in one of London’s subterranean hideouts.

← Canalway Cavalcade 2016: A festival on the waterways of Little Venice
Roman Fort West Gate ruins | A tiny bit of Londinium… hidden in a car park →