← Leis, seafood and fruity cocktails as ‘Under The Sea Supperclub’ comes to Maggie’s
Photo Friday | Have an ‘appointment with the PM’ at 10 Adam Street →

The Sanderson has long been one of the coolest hotels in London. Situated in Fitzrovia, the boutique hotel is situated in a 1950s building and features one restaurant and two bars. I had previously visited their lovely courtyard for alfresco cocktails and really liked the place. However, recently, I finally got round to booking a table in their restaurant for a girlie dinner.

On the night in question, all four of our party ended up arriving unusually late due to dreadful transport issues due a large outdoors event going on in the West End. However, the staff were incredibly patient and friendly. We were shown to a well-placed table on the higher level of the dining room, with views out to the courtyard, which was full of twinkling lights.

On the night in question we opted for a set menu, starting with a signature Sanderson cocktail (Beefeater Gin, Lychee Juice, Melon Liquer, Lime and Aperol) to welcome us. I was initially unsure as I’m not mad about melon or lychee, but the gin and lime flavours came through enough and I found it refreshing and light. Being situated right next to the hotel’s Long Bar, their mixologists were close by for whatever you fancied during the meal.

The menu contains a mix of British cuisine with a European influence and is seasonal. To start with, I opted for the Spiced Parsnip Soup. The flavour was subtle and is a good gentle start to the three-courses.

For my mains, I accidentally ordered a dish in a rush, not realising there was meat included and they happily switched it for another one (I’m a pescatarian). I had opted for the Roasted Salmon with white Bean and Chorizo Cassoulet.

Finally to finish, I decided on the Dandelion and Burdock Popping Candy Ice Cream – a rather more creative and fun dessert than I am used to seeing on the menu. It was quite an unusual combination, with the flavour more subtle than I expected, but I liked it. I also tried my friend’s Coconut and Mango Posset with Lime Zest Crisp, which was fruity and refreshing.

Overall, the meal was good. I would like to go back when there are different set menu options. The best part of the evening was probably the staff, they were incredibly friendly, attentive and accommodating – particularly given my order mistake and our tardiness. 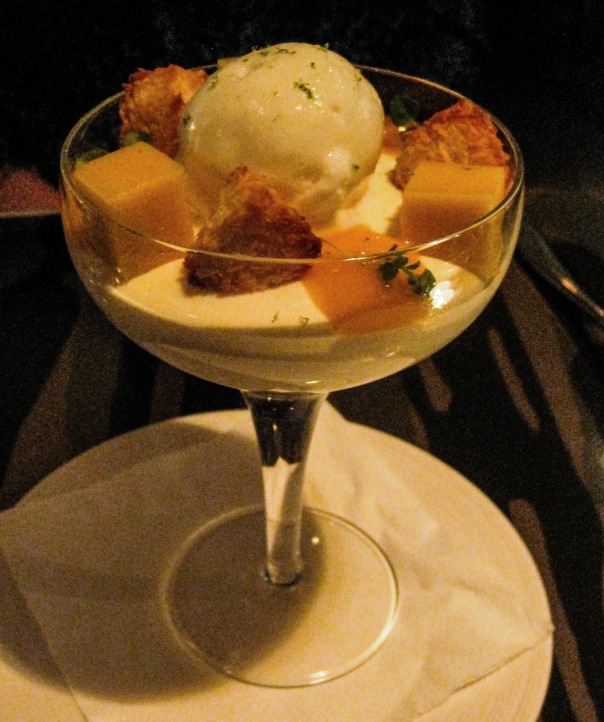 Posted on 12 Jul 2016, in Grub, London and tagged Fitzrovia, foodie. Bookmark the permalink. Comments Off on The Restaurant at Sanderson review: Fine dining at Fitzrovia’s boutique hotel.

← Leis, seafood and fruity cocktails as ‘Under The Sea Supperclub’ comes to Maggie’s
Photo Friday | Have an ‘appointment with the PM’ at 10 Adam Street →