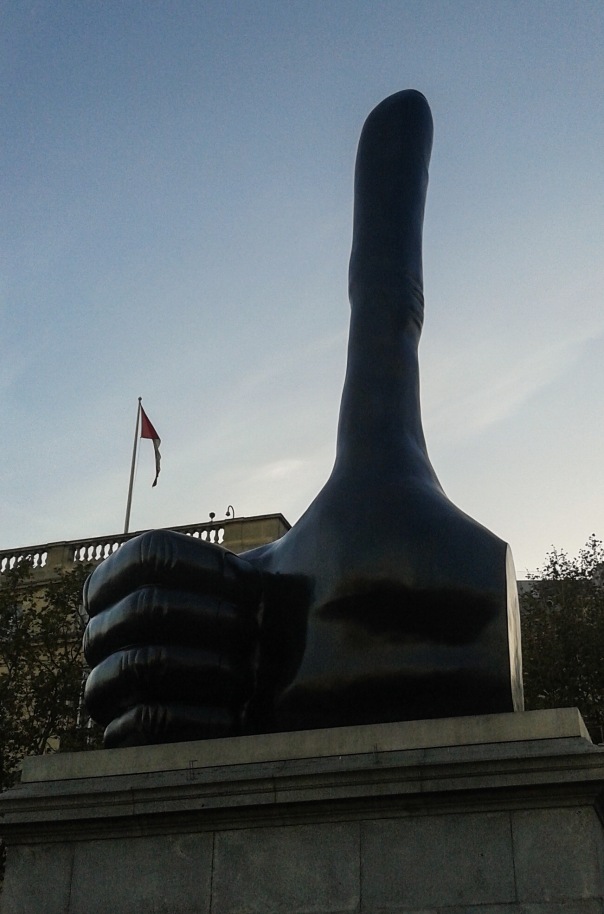 The latest artwork has been unveiled on the Fourth Plinth in London’s Trafalgar Square and it’s already dividing critics and the public. Really Good, a giant hand in a thumbs up gesture by artist David Shrigley, was unveiled on 29 September 2016 and will remain there for the foreseeable future. The new sculpture replaces Gift Horse by German artist Hans Haacke, which had been in situ since March 2015. 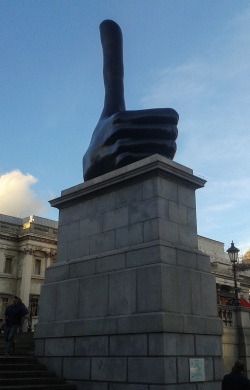 Really Good is the 11th commission for the Fourth Plinth

After Trafalgar Square was laid out in the 1840s, three of the four plinths were – and still are – occupied by sculptures of King George IV, General Sir Charles James Napier and Major-General Sir Henry Havelock. The Fourth Plinth was originally designed to hold an equestrian statue of King William IV, but plans were dropped due to lack of funds. After decades of being empty, a new public art project was conceived in 1998 for the Fourth Plinth to house a rotation of temporary artworks.

Brighton-based artist Shrigley has created a seven-metre high, bronze hand with a disproportionately large thumb. This new sculpture has been hailed as a beacon for positive thinking during a somewhat tricky year, with the Brexit vote dividing the British public. The Guardian’s Jonathan Jones wrote: ‘This is a weird and bizarre sculpture whose stark silhouette against the London sky is not affirmative or reassuring but aggressive.’ Meanwhile, The Telegraph’s Mark Hudson said: ‘If the dark bronze skilfully echoes the patina of the older statues, blending the sculpture into its grandiose setting, the way the ball of the hand, the clenched fingers and thumb relate to each other is uncomfortable and patently unrealistic.’ Personally, I’m still undecided what I think about it and may have to see it a few more times before I decide if I like it or hate it. It’s certainly prompted a lot more debate among Londoners than recent commissions.