Clapham’s drinking and dining destination Aquum has a foodie makeover

Halloumi Martini – a twist on a Cypriot favourite – at Aquum

Aquum has been one of Clapham’s late-night staples since it opened back in 2007. However, with nightlife appetites evolving in recent years and becoming more food orientated, it’s time to roll with the changes. Last week, I was invited to the re-launch of the Clapham High Street venue, which has added to new dining element to its drinking and dancing hotspot.

Aquum has had a makeover in both its design and its format, with the addition of a restaurant making it a more versatile day-to-night destination. Taking over the kitchen is Head Chef Anastasios Tologlou (previously at Medlar, Dinner by Heston Blumenthal and Coloniales Huerta in Valencia), who has conceived a menu inspired by his Greek roots and his experience in some of the world’s top restaurants. The new menu features a variety of light dishes, sharing plates and mains. During the evening, we tried some delicious tasters, such as the Razor Clam and Black Eyed Bean Salad and the particularly fun Halloumi Martini – described as a ‘modern twist on the classic Cypriot dish’, featuring grilled Halloumi cheese soaked in a herb essence.

While Aquum hopes to attract a wider audience for its restaurant, it will continue to stay open late on weekends for DJs taking to the decks. The venue’s mixologists have created a new menu, full of original cocktails and twists on some old classics. We started with some Kir Noirs (Pinot Noir syrup, cherry syrup and Mercier Champagne), which were refreshing and subtly sweet. Next up, was the very girlie-named Twinkle, which appealed to me because of its elderflower ingredient – which has been having a resurgence in popularity over the last couple of years and is one of my favourite flavours. Served in a martini glass, the combination of Elderflower cordial, Eristoff vodka and Mercier Champagne managed to taste both strong and light at the same time. A few of those and you’d be well on your way to a good night out!

Aside from the new eating dimension, the venue has also had a design makeover. Aquum is now spread across four levels, with a second bar and private dining/events space available. The white leather seating has been stripped out for a more contemporary stone and dark leather seating. Many of the nightlife venues on Clapham High Street have been looking rather tired of late, so it’s great to see one of them taking a new approach. Both the drinks and food I sampled so far were different and delicious, so I look forward to returning in future for a weekend which will start with dinner and end with dancing. 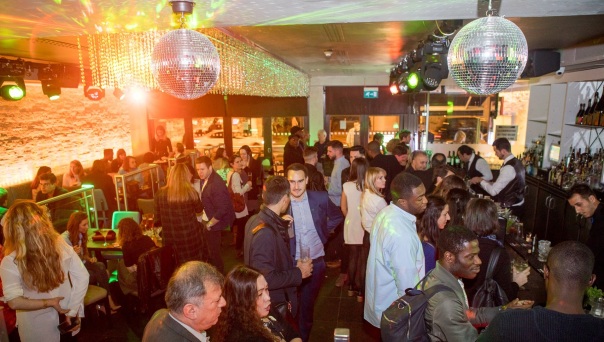 ← David Shrigley’s Really Good comes to the Fourth Plinth
Guide to what’s on in London this Halloween 2016 →
%d bloggers like this: