The history of London’s first ever shopping arcade in St James. 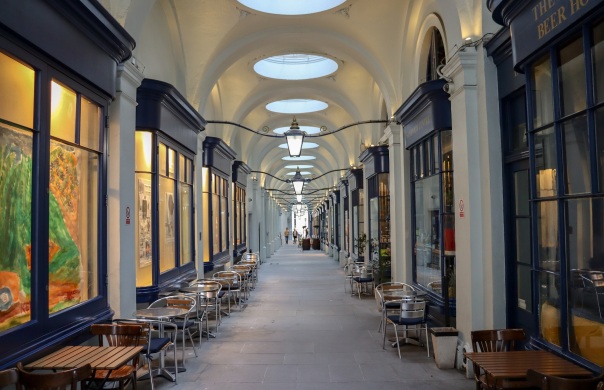 Decades before the likes of Westfield and Brent Cross came to London, those who wanted to shop in comfort headed to one of the capital’s arcades. Like the mega malls of today, these arcades featured numerous shops under one roof, providing a sheltered retail experience whatever the weather. However, as well laid out as these modern fashion meccas are, they just can’t compare to the historic and upmarket designs of the late Georgian, Victorian and Edwardian periods. As part of Metro Girl’s series on the six historic arcades of Mayfair and St James, Part 2 will be focusing on where it all began; the Royal Opera Arcade – the oldest arcade in the world.

The names and buildings of Her Majesty’s Theatre

Now you could well be confused wondering why the Royal Opera Arcade is over a kilometre away from the Royal Opera House in Covent Garden. Well the current opera house has only been in its current location since 1847. The current Her Majesty’s Theatre on Haymarket is the fourth theatre to stand on the site and has experienced numerous name changes throughout history. Throughout the 18th and early 19th century, the theatre was renowned as the place in London to see opera and ballet. However, in 1846, Michael Costa (1808-1884), conductor at Her Majesty’s, had a dispute with the owners and switched allegiance to the Theatre Royal, Covent Garden, bringing most of the company with him. Theatre Royal, Covent Garden was then renamed the Italian Opera House, eventually becoming the Royal Opera House in 1892.

The Royal Opera Arcade was conceived as an add-on to the second theatre to stand on the site – the King’s Theatre. The original King’s Theatre burned down in 1789 and replaced by a new building in 1791, designed by Michael Novosielski (1747–1795), an architect and former scene painter. When it opened, it was the largest theatre in the country. However, as the 19th century progressed, the theatre was in need of improvement. Regency architect John Nash (1752-1835) and his assistant George Stanley Repton (d.1858) altered the façade of the theatre and increased the capacity of the auditorium to 2,500 in 1816-1818. To the west of the theatre, they added the Royal Opera Arcade. Nash is also famous for designing Buckingham Palace, Clarence House, Brighton’s Royal Pavilion, Carlton House Terrace and many others. 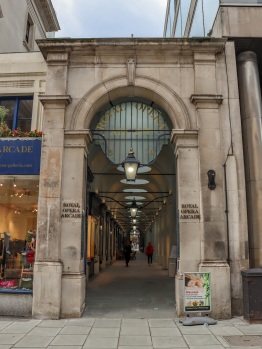 The Pall Mall entrance to the Royal Opera Arcade

The Royal Opera Arcade was a new concept for London and brought fresh approaches to retail, that still continue today. However, it was not an original idea, as architect Thomas Leverton (1743-1824) and surveyor John Fordyce (1735-1809) previously suggested an arcade to improve the theatre complex in the late 18th century. When it opened in 1818, it had a covered walkway, 12 foot wide, running north to south with circular skylights above. On the west side, it featured 19 shops (now 18), which all had their own basements and mezzanine floors. Each shop features a quadrant-curved bay window for displaying their wares, separated from the next by arches stemming from Doric columns. Between every two shops, 19th century lanterns are suspended across the walkway. The arcade offered a new shopping experience for the ladies and gentlemen of the capital, who didn’t want their fine clothes ruined by mud while they perused the products.

A year after the Royal Opera opened, it was followed by the Burlington Arcade and the Lowther Arcade (1830-1904) on the Strand, with the British concept inspiring others around the world – the Galleria Vittorio Emanuele II in Milan (built 1865-1877) and the Queen Victoria Building in Sydney (built 1893-1898) among two famous examples. In December 1867, the arcade narrowly escaped a fire which destroyed most of Novosielski’s Her Majesty’s Theatre. By the late Victorian period, the popularity of the Royal Opera Arcade had dropped, likely due to the increasing retail and entertainment attractions of the Piccadilly area. 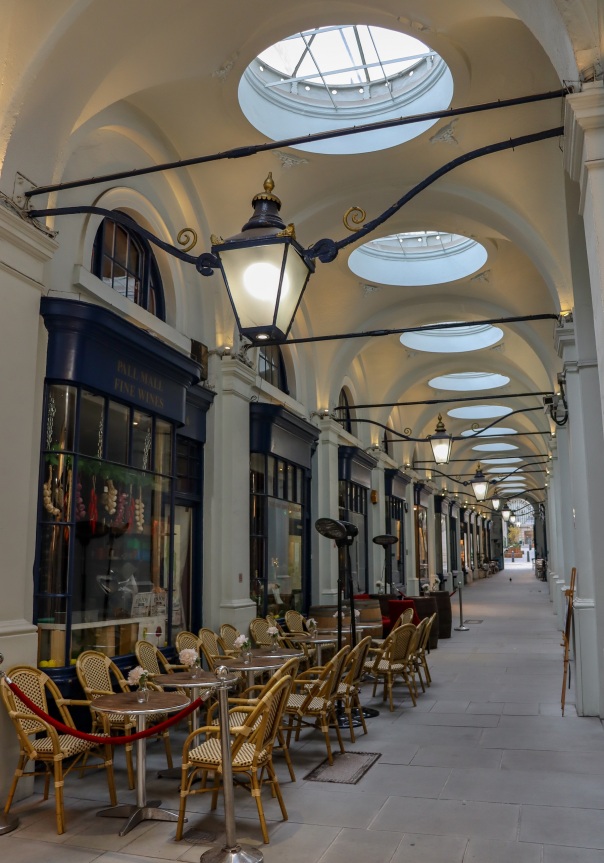 By the late 19th century, the Arcade escaped being consigned to the history books once again. The theatre had run into bad fortunes, it was out-of-date compared to rival, more modern theatres and spent years empty. It even played host to ‘evangelistic meetings’ in the 1870s. The sub-lease was due to expire in 1891 and the Commissioners of Woods, Forests and Land Revenues (forerunners of the Crown Estate) wanted to demolish the entire block. However, as the Arcade’s lease did not expire until 1912, it was saved from demolition. The fourth and current theatre, designed by architect Charles J. Phipps (1835-1897), opened in 1897, alongside the neighbouring Carlton Hotel.

During World War II, the Arcade escaped destruction once again when a German bomb hit the Carlton Hotel in 1940. The New Zealand Government bought the lease for £325,000, the remains of the hotel were demolished in 1957-1958 and the 18-storey New Zealand House was opened in 1963. In the mid 20th century, the eastern side of the arcade was broken through to incorporate shops, meaning it was no longer one-sided. Today the Arcade is home to a range of shops and galleries, including Pall Mall Fine Wines, Pride Shoe Repairs, Stephen Wiltshire Gallery and The Sandwich Centre.