← Feeling Gung-Ho? A giant inflatable obstacle course is coming to London
Pitch Black review: Put your taste buds to the test at a drinking in the dark experience →

Is this London’s smallest alley? Squeeze down Brydges Place in Covent Garden

The history of the 200 yard alley Brydges Place. 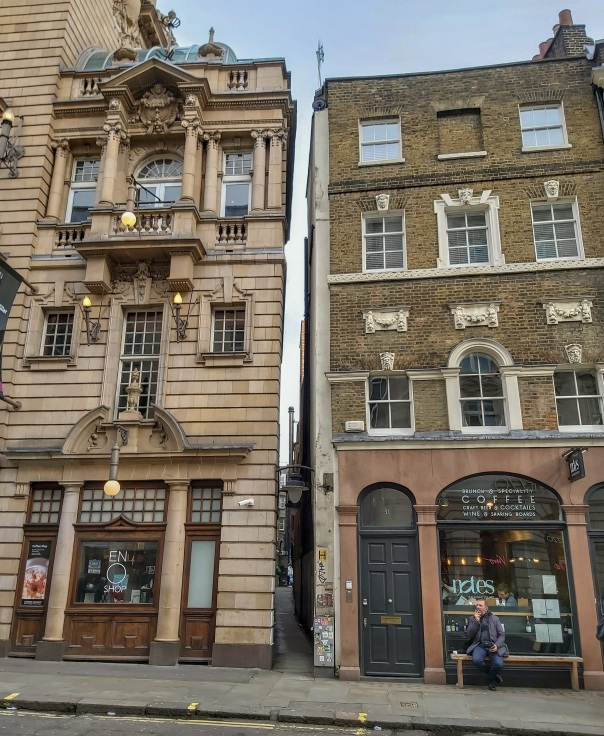 Blink and you’ll miss it! Brydges Place is claimed to be the narrowest alley in London

One thing I love about London is how many little lanes and alleys survive from Victorian or Georgian times (or even older). Despite the constant redevelopment and reconstruction of the ever-evolving capital, some of these tiny thoroughfares remain today as handy shortcuts for those in the know.

Located off St Martin’s Lane in the heart of the West End is a tiny blink-and-you’ll-miss-it alley named Brydges Place. With its western entrance sandwiched between the Coliseum theatre and Notes coffee shop at No.31, it’s claimed to be the narrowest alley in London. It runs for about 200 yards east, linking St Martin’s to Bedfordbury and is believed to be just 15 inches wide at its thinnest point – no passing room there! Along the alley, you’re likely to find punters from the Marquis pub or the Two Brydges members’ club smoking or enjoying an alfresco drink. 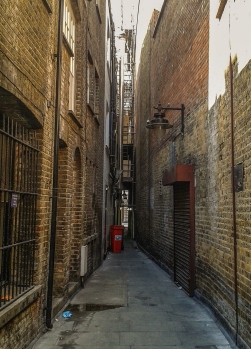 At its narrowest point, Brydges Place is said to be 15 inches wide

St Martin’s Lane is named after St Martin-in-the-Fields church on the north-east corner of Trafalgar Square. The church has been on the site since Medieval times, when much of the current West End area was countryside. The road itself was in existence for many years, a simple country lane linking St Martin to St. Giles-in-the-Fields church half a mile north. In the early 17th century, building started on both sides of the lane, with Francis Russell, the 4th Earl of Bedford (1593-1641) on the east, transforming Covent Garden into what we know today with the construction of the Piazza and St Paul’s church. During this time, Bedfordbury was established running parallel to St Martin’s Lane, with several alleys linking the two roads. Some of the alleys – Hops Garden, Goodwin’s Court and May Court – still exist today.

By the late 19th century, the area around Bedfordbury had fallen into squalor, garnering attention from the Metropolitan Board of Works. The board’s report described some of the courts as less than 4ft wide and featuring many dilapidated houses featuring residents living in severe poverty. In 1880, the houses to the east of Bedfordbury were demolished and Chandos Street was widened.

So this is where we come to Brydges Place. One of many alleys linking St Martin’s and Bedfordbury, Brydges Place is the furthest south – ending near the junction of Chandos Place and Bedfordbury. There’s been an alley roughly on the site since the 17th century. It was first called Dawson’s Alley – supposedly named after William Dawson, a joiner and early lessee of some of the land. At one point, it was said to have been renamed Turners Court in the early 19th century. However in a map from 1868, Turners Court is situated further north of the existing Brydges Place, which was then known as Taylor’s Yard or Taylor’s Buildings. By 1872, Turners Court had vanished altogether, while Taylor’s Yard/Buildings remains on the map for some years after.

Around Covent Garden, many of the street names are named after members of the Bedford family, who owned the Covent Garden estate between the 16th century and 1913. Examples include Bedford Street, Bedfordbury, Chandos Place and Brydges Place – named after the 4th Earl’s wife Catherine Brydges (1580-1657/8), daughter of Giles Brydges, 3rd Baron Chandos (1548-1594) – the likely inspiration for Chandos Place. The alley became known as Brydges Place at some point in the late 19th century. Previously part of Catherine Street (off Aldwych) had been known as Brydges Street until 1872 when it was renamed after the Queen. Today, the alley you seen is somewhat altered from its original state thanks to the construction of the London Coliseum, which opened in 1904. Its high wall dominates most of the alley’s north side. Meanwhile, the south side features various back doors to various establishments and businesses. No.31 St Martin’s Lane at the west entrance of the alley is the oldest house on the road and is Grade II listed, dating back to the 17th century. On the ground floor is a branch of Notes coffee shop, with flats on the upper storeys.

Read more on the alleys and courts of the West End

Goodwin’s Court: Step back in time in a quaint Georgian alley

Georgian shop life and slum makeovers at 23 and 24 Bedfordbury

← Feeling Gung-Ho? A giant inflatable obstacle course is coming to London
Pitch Black review: Put your taste buds to the test at a drinking in the dark experience →
%d bloggers like this: