The Princes Arcade is a 1930s shopping arcade in St James. 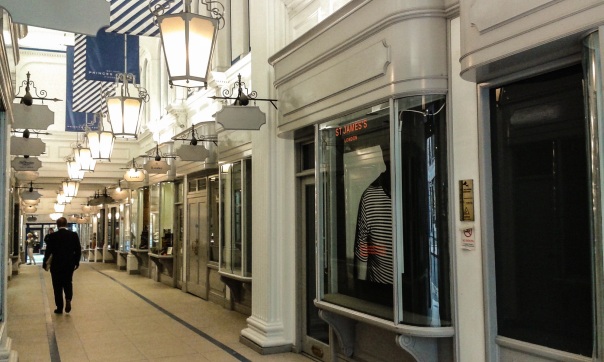 Decades before the likes of Westfield and Brent Cross came to London, those who wanted to shop in comfort headed to one of the capital’s arcades. Like the mega malls of today, these arcades featured numerous shops under one roof, providing a sheltered retail experience whatever the weather. However, as well laid out as these modern fashion meccas are, they just can’t compare to the historic and upmarket designs of the late Georgian, Victorian and Edwardian periods. As part of Metro Girl’s series on the historic arcades of Westminster, Part 5 focuses on the youngest, the Princes Arcade, which unlike the others, wasn’t purpose built.

Princes Arcade is part of Princes House at 190–195 Piccadilly which was originally built to house the Royal Institute of Painters in Water Colours. The building, designed by English architect Edward Robert Robson (1836-1917) and built by Messrs. Holland and Hannen, and Messrs. Peto Brothers of Pimlico, featured galleries, shops and a public hall. Robson was famous for his London state schools of the 1870s and early 1880s. The Piccadilly-facing ground floor featured six shops, with their own basements and mezzanine. On the façade of the building were eight portrait busts by sculptor Edward Onslow Ford (1852-1901). The building was in a prime location opposite the road from the Royal Academy and was opened by Prince and Princess of Wales (the future Edward VII and Queen Alexandra) in April 1883.

The main public gallery in the building was called the Prince’s Hall. However, by the turn of the 20th century, the Hall was joined with the Prince’s Hotel in the rear and it started being used as a restaurant. Between 1929 and 1933, the gallery building and the Prince’s Hotel underwent significant alterations, with the Princes Arcade being constructed at the time. The new arcade linked Jermyn Street and Piccadilly and opened in 1933. The Princes Arcade is roughly about 200ft long and features shopfronts projecting into the aisle on scrolled bracket. The southern part of the Arcade has a lower ceiling than the northern part, with the latter featuring decorative plasterwork with the Princes of Wales feathers.

In World War II, Princes Arcade fell prey to bomb damage in 1940, prompting repairs and alterations. The galleries of the Royal Institute were also damaged, reopening in July 1948. By 1972, the entire building was Grade II-listed – two years after the Royal Institute’s lease expired and they moved to the Mall Galleries near Trafalgar Square.

← Guide to what’s on in London in March 2017
Hang with the art flock at the Paper Aviary in St James →
%d bloggers like this: