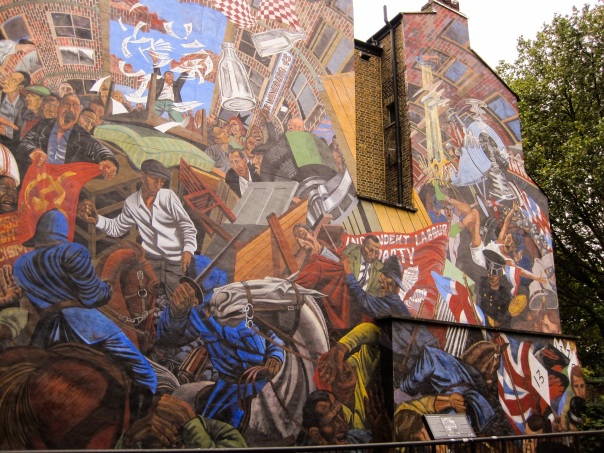 A huge mural depicts the Battle of Cable Street, which took place in October 1936

We’re currently living in a time of great political turmoil on both sides of the Atlantic, with effects from Brexit and Donald Trump’s presidency likely to be felt for years to come. While it’s understandable to feel despair right now, remember Londoners in the past have gone through similar tumultuous times and have managed to come out the other side. In the past year, it seems like more Londoners are expressing their anger over political issues and taking to the streets to protest. However, back in October 1936, ordinary Londoners ended up clashing with police in a historic battle.

In between the two World Wars, politician Oswald Mosley (1896-1980) founded the British Union of Fascists (BUF) in 1932 after becoming disillusioned with the Labour party. His speeches were so controversial, it was predictable that BUF meetings often ran into trouble with Communist and Jewish groups so Mosley enlisted the infamous ‘Blackshirts’ for protection. 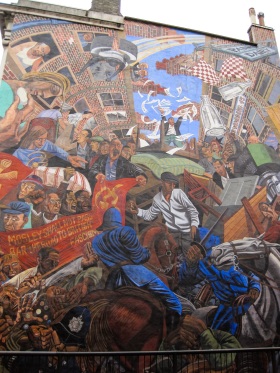 On 4 October 1936, the BUF planned to march through the streets of East London – particularly antagonising as the area was renowned for its large Jewish population. Ignoring their better judgement, the government declined to ban the march and instead requested the police escort the fascists. Outraged by the BUF’s plans, various groups of Jewish, Irish, socialist, anarchist and communist groups decided to put up roadblocks in a bid to stop the march. An estimated 20,000 demonstrators turned up, chanting ‘they shall not pass’, and were confronted by 6,000 police officers, who were under orders to let the BUF march as intended. The ensuing clash between the groups involved protestors fighting back with anything they could get their hands on, including furniture, sticks and rocks. Meanwhile, Mosley’s BUF finally realised what an ill-advised idea it had been and retreated to Hyde Park. Around 175 people – protestors and police – were injured, while 150 demonstrators were arrested. The battle influenced the passing of the Public Order Act 1936, which required political marches to obtain police consent and banned the wearing of political uniforms in public.

Decades later, the historic clash was to be commemorated on a huge mural on the side of St George’s Town Hall on Cable Street. Artist Dave Binnington was commissioned to depict the battle on the 3,500 square feet section of wall, beginning his work in late 1979. It was initially hoped the mural would be completed by the 44th anniversary of the battle in October 1980, but the sheer scale and other technical problems led Binnington to realise it was a bigger task than he estimated. In May 1982, part of the mural was vandalised with far-right graffiti, which prompted a tired and disgusted Binnington to resign from the project. Two months later, artists Paul Butler, Ray Walker and Desmond Rochfort got together to complete the mural, with the top section fulfilling Binnington’s original designs and the vandalised lower portions covered with a modified design. The mural was finally unveiled in May 1983 by Paul Beasley (leader of Tower Hamlets Council) Jack Jones (former General Secretary of the Transport and General Workers Union), Tony Banks (Chair of the Greater London Council Arts Committee) and Dan Jones (Secretary of the Hackney Trades Council).

Unfortunately in the intervening years, the mural has been vandalised several times, but was restored in October 2011 to mark the 75th anniversary of the Battle of Cable Street. Visiting today, it’s an overwhelming and powerful piece of art. The sheer scale and details of the mural will keep many visitors lingering at it for quite some time. The 1930s setting is clear through the style of painting, while the flying milk bottles and broken windows really epitomises the unexpected explosion of violence.

Posted on 2 Apr 2017, in art, History, London and tagged East End, Street art. Bookmark the permalink. Comments Off on ‘They shall not pass’ | Fighting the fascists on the Battle of Cable Street mural.