← Foodies, smoothies, movies and more at the Vauxhall Street Food Garden
Turning lawn bowling on its head at the first ever Festibowl →

Sun, seafood, Spritz and turquoise waters on the stunning island of Sardinia

Review: A week exploring the old town of Alghero and the surrounding areas.

Thanks to a backpacking trip around Europe after graduating, I’ve seen quite a lot of Italy. However, until a trip to the beautiful island of Ischia in 2012, I hadn’t seen much of the country’s islands (Venice doesn’t really count as an island destination!). So when a friend and I decided to enjoy a summer holiday somewhere in the Mediterranean, it didn’t take long before Sardinia was both mentioned. As the second largest island in the Mediterranean, Sardinia has three international airports which are well served by budget airlines. Before even booking our flights, we ended up having to research the island a lot more than we usually would at this stage in the trip so we made sure we booked the right airport. Although I am a driver and like to drive on holiday, I didn’t want to spend the whole trip behind a wheel so we were keen to find a resort with good public transport and amenities in walking distance. Eventually we plumped for Alghero, which turned out to have the cheapest flight prices from London, as well as a wide choice of accommodation, restaurants, nightlife and beaches. Over the centuries, Sardinia has gone back and forward between Italian and Spanish control, with Catalan widely spoken. Today, you will find both Italian and Catalan written and spoken in Sardinia.

Alghero is a Medieval town in north-western Sardinia, with the airport located an easy 10 kilometre drive from the old centre. Most tourists usually stay in the Old Town – full of cobbled streets and surrounded by Medieval ramparts – or the beaches stretching to the north of town. We stayed in the latter, renting a two-bedroom apartment through Booking.com located just a few blocks from the town beach or about a 30 minute walk from the Old Town. The apartment was clean, contemporary and affordable, with outdoor space, and literally a 30 second walk from the bus stop to the airport so an easy location.

In terms of beaches, the town’s main offering is nice enough, but you really have to travel further north to experience those travel brochure worthy beauty spots. A short walk from our apartment was the lovely Spiaggia di Maria Pia, with its white sand and azure waters. There’s plenty of shade from the surrounding woodland, but it was easy to rent an umbrella and loungers from the various beach clubs along the seafront. However, the area’s most famous beach is Spiaggia della Pelosa, right on the northern western tip of the island. With its pure white sands and turquoise water, it looks like something out of the Caribbean. However, we had been warned beforehand that it’s incredibly popular. We stopped by on a late afternoon and there was nowhere left to park. Needless to say, the beach was absolutely rammed full of people. Personally, no matter how beautiful a beach is, if I’m fighting for a spot on the sand with other holidaymakers, I’d rather be elsewhere. En route from Alghero, I recommend stopping at the seaside town of Stintino. We had a lovely alfresco lunch in the cool shade of the Di Bolina restaurant. There’s also a host of other beaches leading from Alghero stretching toward Capo Caccia – a dramatic clifftop viewpoint. Some of the beaches, such as Cala Dragunara, along here involving parking on the coast road and hiking down a steep incline to the beach below. 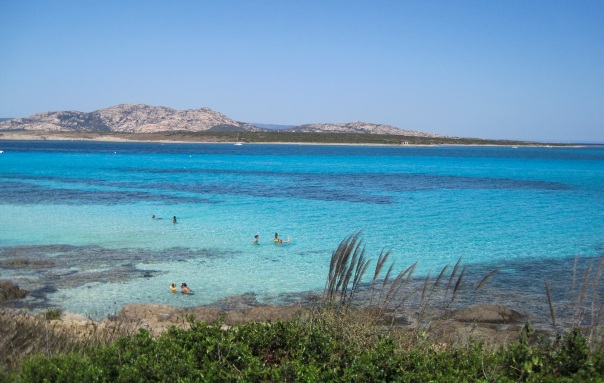 Stroll along the old City Walls for plenty of opportunities to dine, drink and enjoy the sunset

When it comes to the Old Town, aka Centro Storico, there’s enough shops, winding streets and churches to keep you occupied during the day. The 16th century Cathedral di Santa Maria Immacolata has a bell tower with amazing views over the town and the bay. However, I preferred the Chiesa di San Michele, with its stunning rainbow coloured tiled dome, which stood out amongst the sea of red tiled roofs. The Old Town is surrounded by its 16th century Aragonese city walls, which offer great views of the sea. Dotted along the western fringes of the town are a host of restaurants and bars, giving great spots for alfresco dining, people watching and sunset gazing. My friend and I got into a bit of a pattern of heading to Bastioni Marco Polo for an Aperol Spritz while watching the sunset, before heading to dinner.

Throughout our week in Sardinia, we didn’t have a bad meal and had a fabulous foodie experience all-round. Most of the restaurants in Alghero’s Old Town were relatively comparable in price with similar menus, offering typical Italian fare. I recommend pizza fans head to Lu Furat pizzeria, just off Piazza Municipio. A no-frills, cosy destination with a wide range of pizza and fast service. However, our best meal was the incredibly popular and more upmarket Ristorante The Kings on the city wall. It’s highly rated on TripAdvisor and was packed every single night we passed it, so we ended up booking a table for our last night. I had an amazing spaghetti with prawns, fish roe of mullet and bisque of shellfish. The food was delicious, the service was brilliant and the view spectacular, although the bill came in slightly higher than the rest of our meals. The night in question we were there it was pretty windy, but fortunately they provided diners with fleece blankets. In terms of nightlife, they were plenty of bars and pubs. We often ended up at the Xiog bar in the old town which attracted a mixed age crowd and DJs. Also worth a visit is the atmospheric Birreria Sant Miguel, a more of a traditional pub down the cobbled back streets. For those who stay along the beaches, there’s several day-to-night beach bars dotted along the seafront, such as Kelu Lounge Bar, which was a comfortable spot to relax at with an Aperol.

The old Medieval village of San Salvatore, which was transformed into a film set for Spaghetti Westerns in the 1960s. It’s now largely abandoned with its houses in varying states from derelict to restored

For those who want to explore further, a rental car is definitely the way to go. We rented one for two days in advance from Expedia and picked the car up from the airport, which was very straightforward. You may be happy to know that driving appears to be safer and calmer than on the Italian mainland. We spent one day travelling down the west coast towards the Sinus Peninsula, stopping at towns such as Bosa for lunch and Santu Lussurgiu – a detour inland on the side of the Montiferru mountains. We spent a few hours at the relatively quiet and stunning beach of Spiaggia di San Giovanni di Sinis with its tranquil, clear waters and soft sand. Looking back, it was our favourite beach of the entire trip. The beach was in its natural state with hardly any development nearby, it had the right amount of people and a man selling Granita – what more could you want? A great detour while you’re in the area is the ‘ghost town’ of San Salvatore di Sinis. Originally a Medieval village, it was transformed in the 1960s when it became a film set for Spaghetti Westerns. The centrepiece of the village is the 17th century church, surrounded by little houses in varying states of decay. Not quite abandoned, some homes have been restored and it looks like a few are lived in. We spent half an hour wandering through the quaint streets on a very hot afternoon. It’s worth popping into the village church and heading down into the hypogeum to see the fascinating ancient paintings and murals.

Looking back, we thoroughly enjoyed our week in Sardinia. It had just the right balance of relaxing, culture and exploring, although if you prefer to do one more than the other, you’re well catered for. As we only had the car for two days, we barely even scratched the surface of what Sardinia has to offer. I loved Sardinia had its own atmosphere and character distinct from the mainland. I would return to the island for the beaches alone… fortunately there are lots of reasons to return. 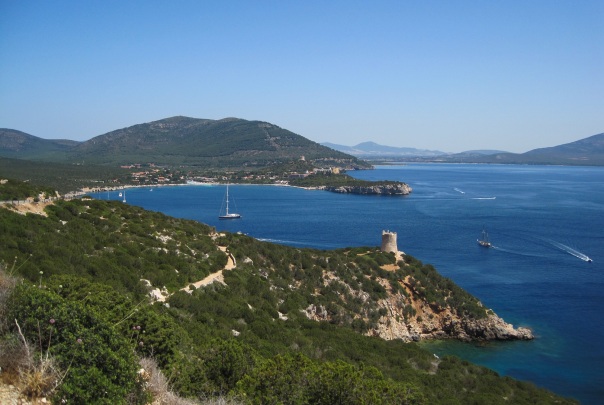 The road up to Capo Caccia has some striking vistas, caves and beaches

Posted on 10 Jun 2017, in You can take the girl out of London... and tagged Italy, Travel. Bookmark the permalink. 1 Comment.

← Foodies, smoothies, movies and more at the Vauxhall Street Food Garden
Turning lawn bowling on its head at the first ever Festibowl →
%d bloggers like this: