← Wanderlust 108: Find your zen at a ‘mindful triathlon’ of running, yoga and meditation
Expanding my skills on a London Landscape Photography class with Obby → 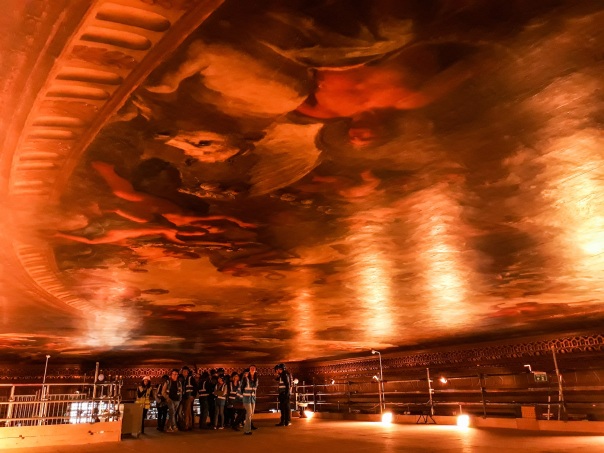 I’m sure I’m not alone when I admit Greenwich is one of my favourite parts of London. It’s history, architecture, views and atmosphere make it one of the capital’s most attractive areas, drawing both tourists and Londoners alike. The jewel of the crown is Sir Christopher Wren (1632-1723) and Nicholas Hawksmoor’s (1661-1736) Old Royal Naval College, a glorious complex of 17th century architecture gazing over the Thames.

The ORNC was originally built in the late 17th century as the Royal Hospital for Seamen to the orders of Queen Mary II (1662-1694), who had seen wounded Naval officers returning from the Battle of La Hogue. What we today know as the Painted Hall was originally designed to be a dining room for the Naval pensioners. The hall was transformed in 1707-1726 by artist Sir James Thornhill (1676-1734) when he was commissioned to create a mural for the ceiling and wall.

This summer, the painted ceiling of the Painted Hall is being restored as part of a huge conservation project. For a limited time, visitors have the chance to get up close to Britain’s largest painted ceiling on special tours. Recently, I donned a hard had and high-vis waistcoat and ascended 60 feet up the scaffolding to see the astonishing detail – and even historic graffiti – of Thornhill’s masterpiece. It was fascinating to see and learn about the painting from the knowledgeable guide. I thoroughly recommend you check it out while you still can.

← Wanderlust 108: Find your zen at a ‘mindful triathlon’ of running, yoga and meditation
Expanding my skills on a London Landscape Photography class with Obby →
%d bloggers like this: