← Flappers, cocktails and roulette at the Prohibition Party 10th birthday
‘No Turning Back: Seven Migration Moments that Changed Britain’: New exhibition at the Migration Museum →

The façade of the Cock and Hoop Tavern: A crime against architecture

The history of a lost Spitalfields pub, which was largely demolished apart from its façade. 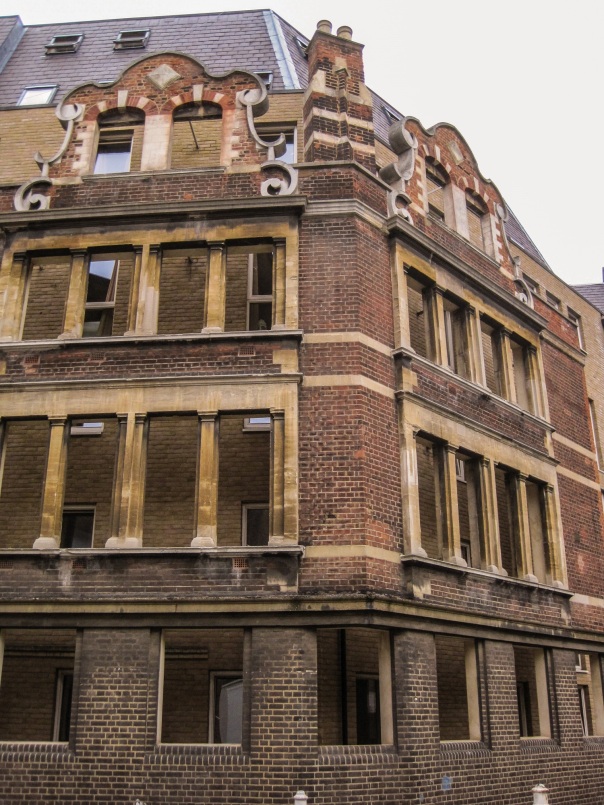 The old façade of the Cock A Hoop tavern in Spitalfields

When developers buy old buildings, there is often fear of what will become of them. Depending on what protections have been put in place by local councils, some can be changed beyond all recognition or even demolished. However, some buildings can be mostly destroyed with only the façade remaining. Sometimes this can be done with great sensitivity and the modern building can complement the older. However, there are some pretty horrendous examples of ‘façadism’, one of which I’m going to look at in this post. 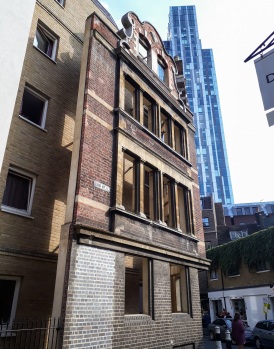 Spitalfields is one of my favourite areas of London – I love the architecture, the history and the atmosphere. Admittedly there has been a lot of development in the past 10 years especially, both good and bad. However, when wandering around the back streets of the area, I often sigh when passing by this shocking example of façadism.

On the corner of Gun Street and Artillery Lane stands what remains of the Cock A Hoop tavern. Today, only the 19th century façade remains, with the modern Lilian Knowles House student housing behind. What is so bizarre, is the windows of Lilian Knowles House don’t even line up with the façade’s windows so residents would have limited lighting and views of brick walls… a very strange design decision.

The Cock A Hoop tavern was established by 1788 at No.1 Gun Street when it was being run by victualler Richard Borstman. By 1805, it was run by Thomas Lloyd, with Joseph Hammond following five years later. I’m presuming (although please comment if I’m wrong!), that name referred to an earlier building on the site and the current façade we see today is the second building. The pub belonged to Meux’s Brewery, owned by brewer Henry Meux (1770-1841) and subsequently his son, MP Sir Henry Meux (1817-1883). Although the brewery no longer exists, its name became infamous due to the London Beer Flood of 1814. At the time, the company was named Meux And Company and its brewery was based on Tottenham Court Road – around the current site of the Dominion Theatre. Surrounding the brewery was the incredibly impoverished slums of St Giles. On 17 October, one of huge vats ruptured, spilling 323,000 imperial gallons of beer onto the surrounding streets. The beer flooded basement homes and destroyed several buildings, resulting in the deaths of eight people, half of which were children. Meux and Co were taken to court, but amazingly managed to escape prosecution, with the judge and jury claiming the spill was an ‘Act of God’. The brewery was later demolished in 1922, with the Dominion Theatre going up on the site in 1928-29. 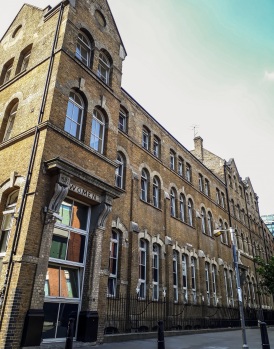 Returning to the Spitalfields pub, it appeared to be a successful business during the Victorian era. It was run by a succession of landlords and landladies, including Nathaniel Gill, Mary Gill and Maria Elizabeth Gill. In 1864, the freehold of the land the pub and surrounding houses were built on was put up for auction. The Cock A Hoop was described as a “first-rate corner premises, doing a large trade, let on lease expiring Michaelmas 1871” in the lot description in The Law Times. The freehold was later sold for £1,600 and let out for £40 a year. By 1884, it had been renamed The Artillery Tavern under publican Charles Wiggs, who lived at the premises with his family and staff. In 1898, it appears the owner was granted permission to rebuild the pub, according to a listing in The Builder. The Artillery Tavern appears to have closed by 1915. By the 1980s, all the pub signage had been removed, but the building was still in use (as this image shows).

Today, the façade casts a shadow over the modern extension of Lilian Knowles House – an accommodation building for students of the London School of Economics. Lilian Knowles House also encompasses the Victorian buildings of the former Providence Row Night Refuge around the corner. The refuge was run by the Sisters of Mercy who provided accommodation for 300 destitute women and children and 50 men. Mary Kelly, the last victim of Jack The Ripper, was said to have sought sanctuary at the refuge at some point. She was found murdered in her rented room at Miller’s Court, Dorset Street (now demolished) across the road from the refuge, on 9 November 1888. The refuge left the building in 2002 when it moved to new premises, with Lilian Knowles House opening in 2006.

Meanwhile (at time of writing), developers are currently creating another piece of façadism on the site of nearby Dorset Street. The 1920s Fruit And Wool Exchange has been partly demolished, apart from the façade, to become office and retail space. Despite Tower Hamlets Council turning down planning permission, then-Mayor of London Boris Johnson (who became renowned during his tenure for frequently taking the side of developers over heritage campaigners) overruled them and gave permission, to the disgust of locals and heritage groups. Let’s hope it looks better than the Gun Street façade when it’s finished in 2018. 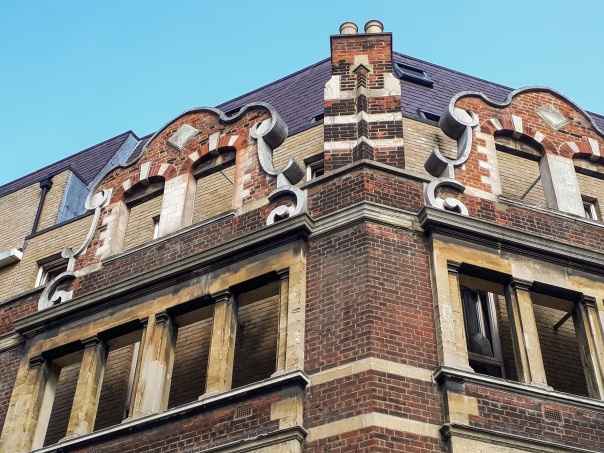 The striking façade features Tuscan baluster windows on the 1st and 2nd floor, patterned brickwork and ornamental stonework on the top storey

← Flappers, cocktails and roulette at the Prohibition Party 10th birthday
‘No Turning Back: Seven Migration Moments that Changed Britain’: New exhibition at the Migration Museum →
%d bloggers like this: