← Guide to what’s on in London this Halloween 2017
Party back in time at Home Front: Immersive Time Travel experience →

The history of this tiny square in St James.

Pickering Place is the smallest square in London

Walking down St James’s Street to the Tudor landmark St James’s Palace, it’s likely you may not have even noticed Pickering Place. Located next to the 17th century wine shop Berry Bros. & Rudd is an unassuming courtyard leading east. Pickering Place is thought to be the smallest public square in London. Entering the square, it’s like stepping back in time. The small space includes Georgian terraces, original gas lamps and wrought iron railings. The only obvious bit of modernity is the alfresco tables and seating spilling out from the Boulestin French restaurant (No.5 St James’s Street) on the north side.

The passage leads off St James Street to Pickering Place

Prior to the establishment of Pickering Place in the Georgian era, there was a court roughly on the same site, called Stroud’s Court. This Court, featuring four small tenements, was built in the back garden of No.3 St James’s Street in around 1690. In 1698, Widow Bourne established a grocery shop and coffee mill at No.3 St James’s Street. The family business appeared to be going so well by the 1730s, her son-in-law William Pickering did a deal with the landlords and agreed to demolish the existing buildings of Stroud Court and rebuild. Pickering obtained a new lease and by 1734 it was renamed Pickering Court and contained the five current dwellings, with his family living at No.5. Pickering’s son William Jnr continued to run the grocers with a relative John Clarke in the 1750s, with the latter’s grandson George Berry joining the business in the early 19th century. The shop has focused on selling wine for over 200 years and continues to trade under the name Berry Bros & Rudd, as you see today. While the Pickering name was lost from the business frontage, the name continued with the square being renamed Pickering Place in 1810.

Meanwhile, on the floor above Berry Bros at No.4 St James’s Street was the Embassy for the Republic of Texas. The Southern state was briefly an independent country from 1836-1845 before it joined the United States. Today, a plaque in the passage entrance commemorates the embassy: “Texas Legation in this building was the legation for the ministers from the Republic of Texas to the Court of St. James 1842 – 1845.” When Texas joined the USA, it abandoned its London embassy and left an unpaid rent bill of £160 to its landlords at Berry Bros. However, over 100 years later, a group of Texans travelled to London to repay the debt of their forefathers in 1986. 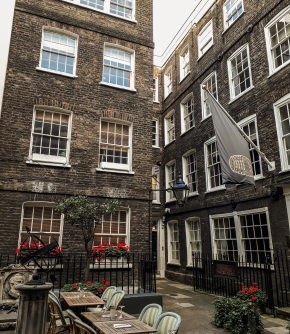 Pickering Place was once known for gambling, dualling and brothels

Wine shops and embassies aside, Pickering Place is also said to be the last place in London where a duel was fought. In the 18th and 19th century, the area hosted some rather dodgy goings on, including gambling, bear-baiting and brothels… we can all assume that those activities could frequently create a duelling situation! Regency dandy and friend to King George IV, Beau Brummell (1778-1840) – who is commemorated with a sculpture outside the Piccadilly Arcade – is among those reported to have fought here. Brummell appears as a character in Georgette Heyer’s 1935 novel Regency Buck, which describes No.5 Pickering Place as a ‘gambling hell’ in Regency London.

Today No.1-5 Pickering Place are all Grade II listed buildings, while the courtyard is used by Boulestin restaurant. Meanwhile, Berry Bros continues to sell hundreds of different wines, as well as hosting special events, wine school and tastings.

← Guide to what’s on in London this Halloween 2017
Party back in time at Home Front: Immersive Time Travel experience →