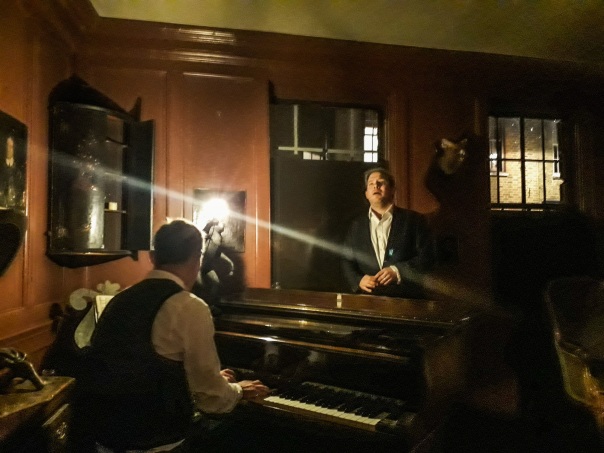 Andrew West and Rob Murray perform during Schumann Street, a ‘song crawl’ around the Huguenot houses of Spitalfields

The Spitalfields Music Festival is an annual celebration of innovative music, featuring local and international talent. Venues across east London play host to a wide variety of performances. The last event of the 2017 festival in December was the captivating Schumann Street. Sixteen artists from very different genre and backgrounds were invited to perform their own interpretation of the songs in German composer Robert Schumann’s 1840 song cycle Dichterliebe (A Poet’s Love). 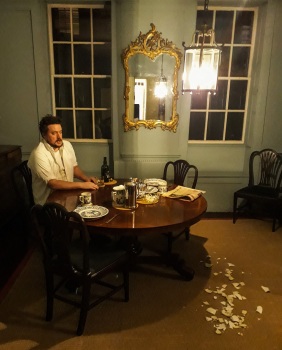 The audience were split into groups to start our journey on the immersive, promenade musical installation. For the evening, eight local residents of the Huguenot houses of Spitalfields had opened their doors to stage two performances across different floors. The whole event takes place over 75 minutes so participants were invited to come and go as we please from each house, spending just long enough to hear the 16 pieces. We started our experience in Wilkes Street, a small group of us stepping into the parlour of a charmingly creaky early 18th century home. With just six of us squeezed into the wood-panelled front room, we sat quietly as a pianist Andrew West and tenor Rob Murray provided an interpretation of one of the song cycles by candlelight. Next, we headed upstairs for a cosier experience with a guitarist Aart Stootman accompanying singer Abimaro by a roaring fire in the living room.

Despite being a classical piece, the story of Dichterliebe was told to us through hip-hop, Bengali folk, soul, jazz, R&B, blues, as well as a classical. We stood, sat on chairs, tables and floors; or lingered in dark corners as we snuck in and out of the performances trying not to interrupt. The song cycle is about love, then loss, with the musicians giving musical expressions of the joy and the torment the heart goes through. One particularly enchanting performance was Mara Carlyle and Liam Byrne in the basement kitchen of a courtyard home. Carlyle sang while wearing Marigolds and washing up at the sink, as Byrne accompanies her on the viol. She then switches direction with a musical saw, bringing a quirky, modern end to the piece. Moving upstairs, we were greeted by an incredibly emotional performance by soprano Héloïse Werner and harpist Anne Denholm in a darkly lit living room. Werner looked positively heartbroken as she forlornly belted out lines from Und Wüssten’s die Blumen. I also particularly enjoyed German duo Apollo 47 depicting the torment and obsession that love can inflict as they rapped Hör’ ich das Liedchen Klingen. In a room covered in lyrics on the wall, the pair were oblivious to the audience as they rambled around with their lanterns trying to make sense of their emotions.

In the end, I only visited seven houses and was disappointed to have missed the last one, due to the fault of my own time management. I enjoyed the different stagings – from a more formal setting of a singer by a piano, to a drunken singing rampage around another house. While some artists acknowledged your presence, for many of the others, it felt like we were eavesdropping on a private or mundane moment – the writing of love letters, household chores, a lonely moping session. In addition to being entertained by very different performances, I felt privileged to see inside these amazing Georgian houses. I loved checking out their original shutters, fireplaces, wood panelling and window seats. Overall, it was certainly an ambitious premise, but the Spitalfields Music Festival certainly pulled it off. The result was a quirky, innovative experience which brought the classical workings of Schumann to a new audience.