Neverland at Vault Festival review: An immersive journey through mirth and misfortune

One of the headline shows at this year’s Vault Festival is Neverland, an immersive theatre musical experience. Following its successful debut in Sheffield last year, the production has an eight-week run at the atmospheric tunnels below Waterloo station. The show is from The Guild of Misrule, the company behind the hit Great Gatsby Musical from last year’s festival. Arriving at The Vaults from the Leake Street tunnel, you follow the neon lights to reach Neverland at the end. As with many immersive theatre productions, you need to let down your guard and embrace the madness, preparing to take on a character or revert to childhood. For Neverland, be prepared to do both.

Upon entering, audience members are greeted by some of the Lost Boys and the Llewelyn Davies family, who quiz you with childlike wonder with innocent questions and Edwardian references. My friend, who works online, completely confused Michael Llewelyn Davies (Casey Jay Andrews) by trying to explain the internet and Google. The premise is the story of author JM Barrie’s (Dominic Allen) relationship with the Llewelyn Davies family, who inspired the characters of Peter Pan. There are many elements of the Pan storyline interwoven with how Barrie came up with the plot as we jump from Edwardian Kensington to Neverland to WWI.

The show mainly takes place in a cavernous tunnel, with audience members broken into groups at times and taken into smaller rooms. We start in ‘real-life’ Kensington as three of the Llewelyn Davies boys; Michael, George and Peter, prepare to go to bed encouraged by family friend Jim, aka Barrie, and their mother Sylvia (Simran Hunjun). It isn’t long before we are transported to Neverland and introduced to the Lost Boys with singing and dancing. It was a hilarious sight to see fellow audience members, myself included, trying to perform a jig while trying not to spill our cocktails and G ‘n’ Ts. Blurring the lines between the story of Peter Pan and Barrie’s friendship with the Llewelyn Davies family, it isn’t long before ‘mother’ dies, referencing the premature death of Sylvia in 1910, leaving her children orphans just three years after the passing of her husband. 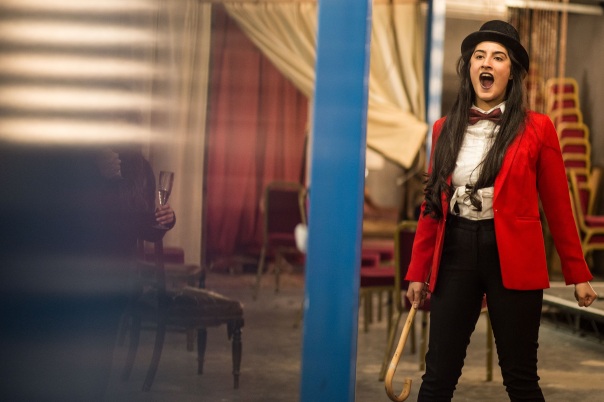 Early on, my group of audience members were led into the ship cabin-like treehouse with ‘mother’, who metamorphosed into Captain Hook. One of my favourite parts of the show were my several excursions to the treehouse, where we established our pirate names, downed shots, recalled childhood memories, interacted with the foul-mouthed and fabulous Hook and shouted expletives at Barrie and the Lost Boys. However, when you are in one of the smaller rooms, you can miss out on some of the narrative elsewhere, which was momentarily confusing at times. The show certainly involves a lot more audience participation than other immersive productions I’ve seen. Throughout the evening, various audience members were invited to perform readings, dance, and even have a nap. Crouched down on bended knee brandishing a toy gun and shooting into stroke-lighting for a pirate battle was particularly surreal.

Prepare to spend 90 minutes in a contrasting, if sometimes chaotic, mix of childhood fun and moving, poignant moments. While the physical action and immersive parts of the production can be entertaining, the themes of loss are incredibly sad. The tragedies of the Llewelyn Davies family and the experiences of the boys in WWI, one of which who was killed in battle, are explored with symbolism and song. The multi-talented cast certainly put us through our paces as they moved effortlessly from acting to singing to acrobatics to playing a range of instruments. Hunjun as Sylvia/Hook was a particularly strong singer and was given space to showcase her wide range. At times, the tunnel’s acoustics made it difficult to hear what was being said, but we certainly enjoyed the versatility of the space with its various rooms. While the traditional Peter Pan story was more of a sub-plot during this production, don’t worry – Peter does get to fly.

To find out what else is on at this year’s Vault Festival, click here.