What is a cricket sign doing on a tube station? 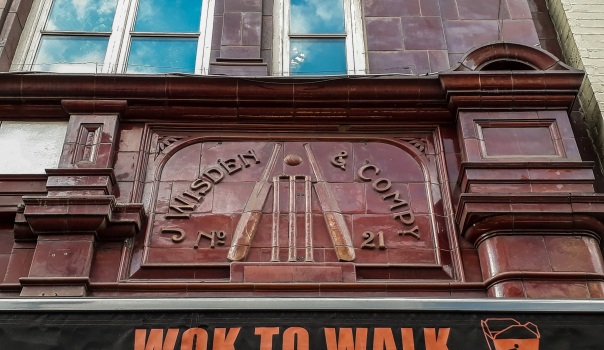 The architecture of London’s tube stations vary wildly, from Victorian façades to modern 21st century designs. However, the exteriors’ designs tend to be exclusively for Transport for London. However, there is an exception to this, where a separate business has been immortalised in the iconic ox blood-red tiling of Leicester Square station. If you look at the Cranbourn Street exit, you’ll see a set of cricket stumps, a ball and a pair of bats along with the words ‘J Wisden & Compy No.21’.

Long before Leicester Square station was built, there was a Victorian cricketer named John Wisden (1826-1884), who played for Kent, Middlesex and Sussex over a career that spanned 18 years. However, it was his ventures off the field that he is mostly remembered for today. While still playing, he teamed up with sports outfitter Fred Lillywhite (1829-1866) in 1855 to create a side business. The pair opened a cricket and cigar shop at 2 New Coventry Street, just off Leicester Square. However, their partnership was dissolved in January 1859 with Lillywhite handing over the business to Wisden. In the 1861 census, he is listed as living above the shop with his sister, his teenage cousin and a porter, Joseph Williams. In addition to being a good cricketer, it appears Wisden was a successful businessman and expanded into publishing following early retirement. In 1863, Wisden hung up his bat at the age of 37 because of his rheumatism. The following year, he launched the Wisden Cricketers’ Almanack, a reference book of the sport published annually. Wisden wanted the book to compete with his former business partner-turned-rival Lillywhite’s The Guide To Cricketers.

By 1872, he moved his shop to the other side of Leicester Square at 21 Cranbourn Street. At the time, Cranbourn Street connected St Martin’s Lane to Leicester Square, as Charing Cross Road did not exist until 1886. He expanded his business into manufacturing and retailing other sports equipment, as well as cricket. In April 1884, Wisden died of cancer in his flat above the shop aged 55. He passed away unmarried and childless, so his estate went to his sister. She sold the company to Wisden’s general manager Henry Luff (1856-1910), who went on to open a second store in Great Newport Street – just a few minutes walk away – in 1896.

Luff died in 1910 – the year Leicester Square tube station opened. Three houses on Cranbourn Street were compulsory purchased by tube bosses and demolished to make way for the new transport. The new station, which serviced the Great Northern, Piccadilly and Brompton Railway, was designed by architect Leslie Green (1875-1908), known for his signature style of ox-blood red tiling and semi-circular first-floor windows. Following the opening of the tube, the Wisden store was relocated in the new station. As a sign of Wisden’s respected reputation and standing, Green had incorporated Wisden signage into his iconic red tiling.

The Wisden store was subsequently run by Luff’s son Ernest and it received the royal warrant for their “appointment as Athletic Outfitters to the King”, George V, in 1911. Despite this honour, the station shop went on to close in 1928, with the nearby Great Newport Street branch hanging on longer until 1961. While the shops are long gone, Wisden’s publishing company still continues today and is now an imprint of Bloomsbury Publishing. The Almanack is still published annually today and remains popular with cricket fans around the world.

A unique London brunch experience at the Underground Brunch Club

Posted on 21 Feb 2018, in Architecture, History, London and tagged 1910s, Leslie Green, London Underground, tube. Bookmark the permalink. Comments Off on What is a cricket sign doing on a tube station?.