← Explore the swinging sixties with the My Generation exhibition at Carnaby
Backyard Cinema: Mission To Mars: Travel to another galaxy to watch your fave sci-fi film →

The story of Long Acre in Covent Garden and a remnant of its former industry.

Long Acre is a busy shopping thoroughfare in the Covent Garden area of London. Linking Drury Lane with St Martin’s Lane, it has a host of shops from affordable to expensive, attracting both tourists and Londoners. As a one-way road, Long Acre isn’t particularly wide so most pedestrians rarely look up to see the Georgian and Victorian detailing of its many historic buildings. I have walked down Long Acre hundreds of times in my life and never noticed the stunning façade of No. 30-31. Now home to a branch of Gap clothing, the former carriage shop dates back to the late 19th century and shows a clue to its past life.

From the 13th to the 16th century, the area we know today as Covent Garden was ‘the garden of the Abbey and Convent’. The land covered 40 acres and was looked after by the monks of Westminster. However, King Henry VIII (1491-1547) seized the land during the dissolution of the monasteries and in 1552, it was given to John Russell, Earl of Bedford (1485-1555). The northern boundary of the estate was referred to the ‘long acre’ after the first pathway was constructed. In the early 17th century, King Charles I (1600-1649) criticised the condition of the road and houses along Long Acre, prompting estate owner Francis Russell, 4th Earl of Bedford (1593-1641), to try to tidy up the area with more attractive dwellings. As well as improving Long Acre, Russell laid out Covent Garden Piazza and commissioned architect Inigo Jones to design St Paul’s Church in the 1630s. 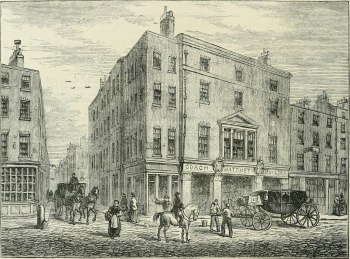 Famous coachbuilder Hatchett had a shop on Long Acre in the 18th and 19th century. (1783 sketch by John Miller in the London Metropolitan Archives)

By the late 17th century, Long Acre started to attract the coach and carriage building trade. In the late 18th century, one of Long Acre’s most famous coach makers was Hatchett & Co at No.121, on the current site of the Calvin Klein boutique and directly opposite Nos 30-31. John Hatchett, whose family were in business from 1750-1870, was credited with creating high standards and innovative designs of carriages copied by his rivals (click here for one of his designs). According to the Carriage Journal, the Hatchetts employed several hundred workers, while John served as chief of The Worshipful Company of Coachmakers and Coach-Harness Makers livery company in 1785, which still exists today. As the 19th century progressed, Long Acre was dominated by coach builders and harness makers, with names such as Pearce & Countze; Edwin Kesterton; Silk & Sons; Wyburn, Meller & Turner; Holman & Whittingham; G. Amery; T George & Co, and, finally, C. S. Windover and Co., Ltd, who was coach builder to her Majesty and next door neighbour at No.33.

The current building at No.30-31 Long Acre wasn’t erected until the 1870s, but wasn’t the first carriage business on the site. A coachmaker named William Clarendon traded from No.30 in the 1780s. From as early as 1834, Norfolk-born Charles Eastgate, a coachsmith, was the head of 31 Long Acre. As well as running his business from the site, Charles also lived at the premises with his wife Mary Ann, four daughters, two employees and their respective families. He continued to trade throughout the 1840s, but ran into money trouble and ended up in the Debtors Prison for London and Middlesex in 1849. Many Victorians went to prison for debt and would have to remain behind bars until they could pay off their debts through labour or outside funds. Sometimes they would bring their wives and children to live with them in prison, which famously happened to Charles Dickens‘ father when he was a boy. By 1851, it looks like Charles Eastgate was back on his feet, as he is listed as living back at No.31 with his wife, their daughters and have been joined by two young sons. In the 1851 Census, Charles’ bank balance appears to be healthier as they can afford a servant and he is employing three men at his coachworks. However, it appears Charles died in 1859 with his wife Mary Ann named as head of the house in the 1861 census. Their eldest son Charles Jnr has joined the family business and is working as a coachsmith. The family doesn’t stay too long at Long Acre and have moved round the corner to 104 St Martin’s Lane by 1871. Around this time, youngest son William has followed in the footsteps of his father and brother, with his profession listed as ‘coach maker’. By 1881, the Eastgates appear to have left the area, with William moving to Kennington with his wife Sophia and their son. His career path seems to be more specialised as he labels his profession as ‘coach spring maker’.

The lettering for ‘Carriage Manufactory’ hints at the building’s origin

While the Eastgates were trading from No.31, their other next-door-neighbour Richard Strong may well have been eyeing their property for future expansion. Wiltshire-born Strong started his career in the horse and carriage industry as a young man in 1830s London. Strong lived in the City Road/Old Street part of the capital with his wife Maria and their children. In the 1841 census, he is listed as a harness maker, before progressing to a saddler a decade later. In 1851, it looks like things are going well, with premises on City Road, including three employees and one apprentice. By 1856, he’s moved into the West End and is listed as a coach and harness maker at 29-30 Long Acre in the 1856 Post Office Directory. Five years later, Strong has employed his eldest son John, 18, to work as a harness maker. 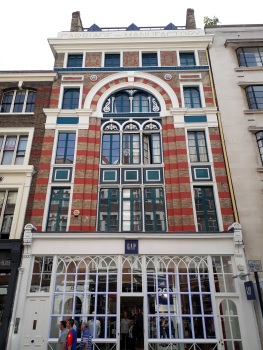 With so many coach businesses in Long Acre, there was tough competition. Strong took out several advertisements in local press and proclaimed some of his rivals were risking the health and safety of coach passengers with their low quality products. A February 1871 article in the Morning Post claims that many carriage accidents have taken place in ‘extremely dangerous’ transport made from hickory wood and steel tyres. It then suggests ‘Mr Strong, the well-known carriage builder of Long Acre, of well-seasoned English woods and that many very severe experimented have fully confirmed the superiority of these home materials… his work has certainly succeeded in producing some of the most graceful, durable and comfortable Broughams and Landaus ever seen.’ Meanwhile, in August 1872, Strong took out an advert for his miniature Broughams in The Lancet. He accused his rivals of copying his design with lower quality materials, pointing out he has ‘built these carriages uninterruptedly for 25 years and in order that their quality may be tested’.

It appears the family business is going from strength-to-strength in the 1860s with a coach factory established in Long Acre. Strong had acquired No.31 by the early 1860s. By the 1871 Census, Strong describes himself as a ‘coach builder employing 15 men’. The family is now living in Finchley, some eight miles north of Covent Garden, but with good train services connecting them to the West End. Both Strong sons had joined the business and were working as clerks in the factory. Strong’s Carriage Manufactory prided itself on producing horse-drawn carriages, such as Broughams and Landaus – the latter being a style favoured by royals and Lord Mayors. Advertisements from the time show Strong offered his customers a deal that if they continued to lease his carriages for over three years, they could keep them without further payment.

In the 1870s, Strong wanted a new building to house his carriage factory. The current No.30-31 you see today was built in 1878 in an Italianate style. With red brick bands, Venetian windows and twisted columns, it certainly would have stood out from rival stores. The top floor of the five-storey building features the words ‘Carriage Manufactory’ written in block capitals, which still exists today, the writing having been recently restored. By 1881, business is still going with son John still working as a clerk, although youngest son Harry tragically died in 1879 in his 30s. Along with the Long Acre site, Strong also had a premises at 227 Whitechapel Road. Around this time, Long Acre is still a desirable address for both living and working, with Charles Booth labelling the area as ‘middle class, well-to-do’ on his poverty map of London. Following the 1881 census, the trail for the Strong family and their carriage factory went cold. Strong was widowed in 1895 when his wife Maria passed away, but may have lived to a ripe old age (by Victorian expectations). An elderly man named Richard Strong died in Barnet in 1902 at the age of 87 – meaning he was born the same year as the coachmaker, so it’s quite likely it was him.

By 1893, C.S Windover & Co have moved into No.30 (having previous been based at No.33) and advertised themselves as “coachbuilders by special appointment to H.R.H. The Prince of Wales”. They manufactured the ‘Ralli’ carriage and ‘Morning Car’. The company was still there in 1908, selling ‘Landau’ carriages for 85 guineas.

Austin and Mercedes Showrooms in Long Acre in 1910.
(Image from Birmingham Museums Trust via Wikimedia Commons)

Meanwhile, by the turn of the 20th century, horses and carriages were having to share the roads with the motor car. By 1906, the 41 transport businesses established in Long Acre featured a mix of traditional coach builders and the burgeoning motor vehicle trade. Ten years later, the carriages had mostly moved out, with a host of big names showcasing their vehicles. Among those with showrooms on Long Acre included Austin Motors at 134 (now Barbour clothing), Mercedes at 127-30 (now a Cos), along with Daimler and Fiat. In 1920, Motrac Engineering were based at 30-31 Long Acre.

Today, No.30-31 is one of the only buildings showing a clue to Long Acre’s long-lost reputation as a hub for carriage makers. Fortunately it escaped damage during World War I, although another building on Long Acre suffered huge damage and loss of life. Thirty-eight people were killed and 85 were injured in a temporary shelter in the basement of Odham’s Printing Works at No.93 Long Acre in January 1918. A 300kg bomb missed the four-storey building, but destroyed the pavement and exploded in one of its basement rooms, causing a fire. It was the most casualties caused by a single bomb during the war. Today, the site features a modern building, housing French Connection and EE stores. From 1950s-1970s, the carriage manufactory building was used by fruit merchants, Yeoward Brothers. In January 1973, No.30-31 was Grade II listed by English Heritage (see a photo of it in 1974). The rear of 22-23 Long Acre, the former 1833 premises of coach builder Henry Lewis Turrill, is also listed. Today, the ground floor of 30-31 features a gothic-style shopfront, designed by John Prizeman in 1975.

Georgian shop life and slum makeovers at 23 and 24 Bedfordbury

Goodwin’s Court: Step back in time in a quaint Georgian alley

Posted on 4 Mar 2018, in Architecture, History, London, Shopping and tagged Covent Garden, Victorian. Bookmark the permalink. Comments Off on Long Acre’s horsey history and the story behind the Carriage Manufactory.

← Explore the swinging sixties with the My Generation exhibition at Carnaby
Backyard Cinema: Mission To Mars: Travel to another galaxy to watch your fave sci-fi film →