The history behind the Art Deco building on the corner of Great Marlborough Street and Argyll Street. 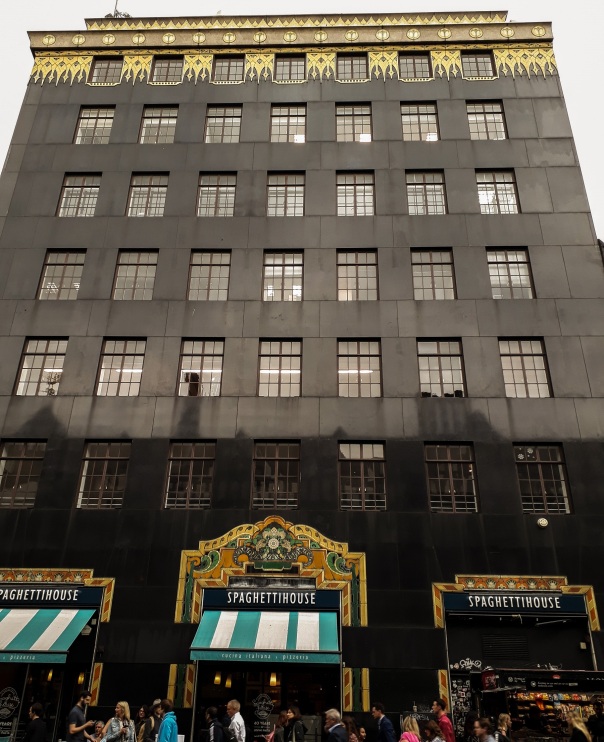 Standing across the road from the Tudor-style Liberty department store is a striking building which couldn’t look more different. Palladium House is a Grade II listed Art Deco office block on the corner of Great Marlborough Street and Argyll Street. With its Egyptian detailing and black granite, the building wouldn’t look out-of-place in Manhattan. So it’s not surprising to discover it was built as a smaller twin to another skyscraper across the pond by an American architect for an American company.

Great Marlborough Street dates back to the early 18th century when the road was named in honour of the Duke of Marlborough’s victory at Blenheim in 1704. The Duke of Argyll then added Argyll Street in 1736. Various buildings came and went over the remaining centuries, with the site becoming empty and ready for Palladium House in the early 20th century.

Today, we tend to think of radiators as a relatively modern invention, with many British homes not embracing the technology until the 1970s and 1980s. One of my childhood homes had no central heating when we moved in and installing some was fortunately my parents’ first priority. However, the central heating we have today stems back to the mid 19th century thanks to inventors like Franz San Galli, Joseph Nason and Robert Briggs. In 1902, the National Radiator Company was formed in Pennsylvania, USA, with the hopes of bringing this technology to homes across America and beyond. By the 1920s, the NRC’s business was going so well they bought a plot of land in Bryant Park area of Manhattan, New York City. American architect Raymond Hood (1881-1934) and French architect Jacques André Fouilhoux (1879–1945) co-designed the American Radiator Building with a combination of Art Deco and Gothic styles in 1924. Today, the building is one of Manhattan’s iconic skyscrapers and is now home to the Bryant Park Hotel. 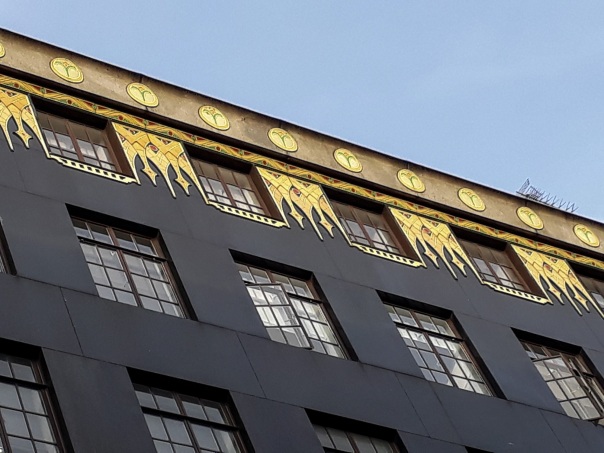 Despite their success in the US, the ARC had global dreams. They had already had a factory in Hull since 1906, and had subsidiaries in France and Germany. A few years after erecting the American Radiator Building in the Big Apple, they bought a plot of land in London’s West End for their UK headquarters. They brought Hood over from America to design their new building and enlisted British architect Stanley Gordon Jeeves (1888-1964). Their design was in the Art Deco style and a scaled down version of its New York counterpart. Palladium House is the only European building by Hood, who also designed or co-designed Chicago’s Tribune Tower and New York City’s Rockefeller Center and New York Daily News buildings. Meanwhile, Jeeves went on to create the Earls Court Exhibition Centre and Dolphin Square flats in Pimlico.

Built between 1928 and 1929, Palladium House is a seven storey office block with a black granite façade. The upper storey of the building is decorated with a gold, yellow, orange and green, Egyptian-inspired enamel frieze and cornice. The ground floor features wide windows, originally designed to showcase the company’s radiators. The windows and doorways are decorated with ornate, bronze enamelled plates featuring lotus and jazz-modern geometric patterns. While several colours were used, it’s really the black and gold which stands out to the onlooker, which happen to be the official colours of the NRC. When the building first opened, the ground floor contained the showroom, while the floors above contained office space. By 1934, the British division of the NRC became Ideal Boilers and Radiators, with the building being renamed Ideal House. In 1935 the building was extended further along Argyll Street – you can seen the divide as there is a wider space between groups of four and seven windows.

The heating company moved out years ago and were replaced by new businesses. In the 1970s, the former showroom was home to two restaurants – Argus Steak House and Tennessee Pancake House. Today the building has since been renamed Palladium House after its neighbour, the Palladium Theatre. In 1981, it was declared a Grade II listed building by Historic England. On the ground floor are two restaurants, while the other floors feature office space. Although the enamel surround still exists on the Great Marlborough Street entrance, the Argyll St one has been removed in the late ’60s or early ’70s and is currently in the Victoria & Albert Museum. (Check out a photo of the original Argyll Street door in a London Metropolitan Archives photo from 1962).

Posted on 23 Mar 2018, in Architecture, History, London and tagged 1920s, Art deco, Soho. Bookmark the permalink. Comments Off on Palladium House | An architectural slice of the Big Apple in London’s Soho.