← Guide to what’s on in London in April 2018
Afternoon Tea at Sketch Gallery review: A fun and eclectic approach to a traditional favourite →

Bed and sink unit from the first-class cabin of the Mauretania, made in 1906-1907

Long before planes dominated international travel, cruise liners were the way to go abroad. Throughout the 19th century and early 20th century, huge swathes of Europeans crossed the Atlantic to start a new life or explore the Americas. Today, the cruise liner is stereotypically associated with pensioners on holiday and has been getting a bad rap in recent years for the ‘negative’ tourism it brings to port cities such as Venice, Barcelona or Dubrovnik. While current cruise liners are apparently very comfortable and have all the mod cons, we don’t quite associate them with the glamour they had in yesteryear. A current exhibition at the Victoria and Albert Museum delves into their history, starting as far back as Isambard Kingdom Brunel’s SS Great Eastern in 1857, which revolutionised boat transport. 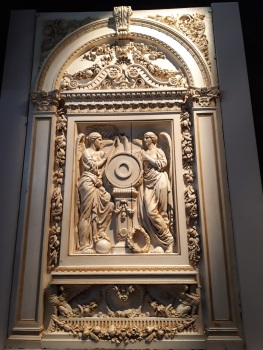 Honour and Glory crowning Time, from the Olympic (1910), the Titanic’s sister ship

The exhibition kicks off with the advertising – with posters, brochures and flyers showcasing famous liners such as the Normandie, Olympic, Titanic and Mauretania. Like a would-be passenger of the time, this is usually the first impression you would have of a liner before seeing it in the flesh. The dozens of shipping companies in the 19th and early 20th century were incredibly competitive. New liners always tried to boast some new feature the others didn’t have, with the Titanic’s claim to being unsinkable proving horrifically untrue.

However, as in real-life for travellers, the advertising is simply a warm-up. We are then introduced to the first of 200 pieces of artefacts from cruise liners gone by, including furniture, uniforms, art work, film footage, panelling and more. As someone who has long been interested in the Titanic’s history beyond the film, it was amazing to see the ‘Honour and Glory crowning Time’ clock panel from the RMS Olympic – Titanic’s sister ship. Fans of the 1998 film will remember this was faithfully recreated as the meeting place for Jack and Rose on the grand staircase. The exhibition also features two artefacts from the Titanic – a deckchair and a panel from the first class lounge rescued from the north Atlantic after the ship went down in April 1912. The wooden panel is displayed at the end of the exhibition appearing to float at sea, just how it was found over 100 years ago. From around the same time period is furniture from the RMS Mauretania (1906). Run by Cunard, it was the world’s largest ship until it was overcome by the Olympic in 1911. On show is a bed from first-class cabin C23, designed by workers at the Swan Hunter & Wigham Richardson shipyard at Wallsend Tyne and Wear.

Mannequins in swimsuits from the mid 20th century

One liner that often appears throughout the exhibition is the Normandie, launched in 1935 by the Compagnie Générale Transatlantique. Although not a huge commercial success, she is widely labelled as one of the greatest liners ever due to her stunning design and interiors and was the largest and fastest when she entered service. An Art Deco lacquer panel, designed by Jean Dunand for the first-class smoking room, is stunning and huge. Going back two decades is another example of a striking Gallic liner by the same company, the SS France (1910). The doors and panelling from the embarkation hall and communication gallery from around 1912 are joined by two armchairs from the first class dining room and they give you a good understanding of why the ship was nicknamed ‘the Versailles of the Atlantic’. However, as the exhibition progresses through the decades, the furniture and decoration rather deteriorates into more simple and bland designs by the 1950s and the 1960s. Looking back over 150 years of mass transit, it’s clear the Victorians and inter-war period were clearly leading the way in terms of style. 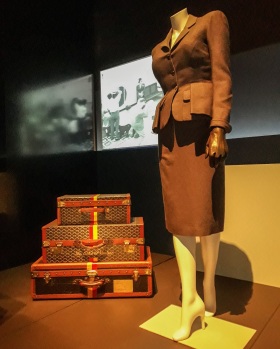 1940s luggage owned by Edward, Duke Of Windsor and a 1949 Christian Dior ‘new look’ suit worn by Marlene Dietrich on the Queen Elizabeth in 1950

The exhibition demonstrates how boarding a ship was so much more than just a mode of transport, it was a place for high society to see and be seen. Many liners had grand staircases, so the upper class women could showcase their style and make a big entrance as they made their way to dinner. Vintage fashion fans will love some of the exquisite pieces, such as a beautiful 1925 Lanvin flapper dress worn by American socialite Miss Emilie Grigsby after she bought it on a trip to Paris. Another fabulous ensemble is a 1949 Christian Dior ‘new look’ suit worn by Hollywood star Marlene Dietrich when she arrived in New York City on board the RMS Queen Elizabeth (1938) in 1950, accompanied by film footage of her on board. It was great PR for cruise liners to have celebrities on board and to have them photographed embarking and disembarking their vessels. A few inches away from Dietrich’s suit is 1940s personalised Maison Goyard luggage owned by Edward, Duke of Windsor, who travelled extensively with his wife Wallis, Duchess of Windsor, following their controversial marriage and his abdication.

The exhibition covers a huge space and features so much detail, from technology, to interiors, to fashion. For someone who has never travelled on a cruise ship, it really gave a good impression of what on-board life was like. While I’m in no rush to step on a cruise ship these days, I think I could have been very well persuaded to do so if I lived 100 years ago. While the exhibition does celebrate the style and beauty of these floating masterpieces, it’s also in touch with the tragic reality of some of these vessels with poignant reminders that not everyone reached their intended destination. At first glimpse, a tiara worn by Lady Marguerite Allan on the RMS Lusitania (1906) is a glittering piece of vintage jewellery. However, you soon learn it was rescued by her maid when the ship was bombed by the Germans in 1915, while her two daughters were among the 1,198 who perished. Unsurprisingly, the exhibition has attracted many mature visitors, who grew up in an era dominated by liner travel and when flying was unattainable to many. As I perused the artefacts, I accidentally overheard a few personal stories of people who had travelled on the original RMS Queen Elizabeth and other liners from the era, who were clearly finding the experience a nostalgic journey. Overall, I thoroughly enjoyed the exhibition and recommend checking it out.

← Guide to what’s on in London in April 2018
Afternoon Tea at Sketch Gallery review: A fun and eclectic approach to a traditional favourite →
%d bloggers like this: