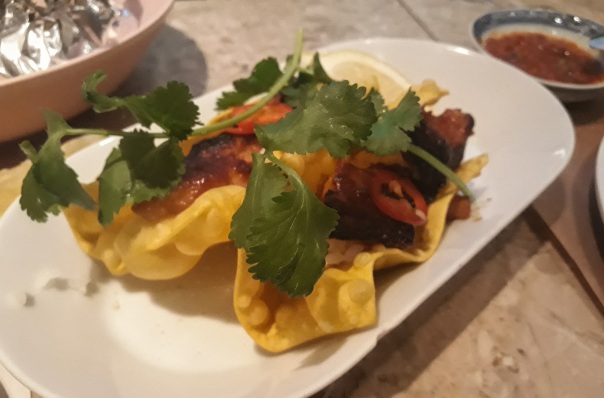 Last week, I ended up dining in Soho’s hottest new opening by accident. A friend and I had been at a launch party so were feeling peckish after canapés failed to satisfy our hunger. Walking down Frith Street, we spotted Freakscene, a pan-Asian fusion restaurant which opened just a month ago. The bar-style seating overlooking the kitchen gave the venue a really buzzy feel and easily pulled us inside. We grabbed two stools and were immediately hit with the amazing scents coming from the Kobata grill. I’ve visited South East Asia quite a lot and the love the hawker open-kitchen style so this really appealed to me.

Freakscene’s arrival in Soho comes after a hugely successful pop-up in Farringdon from Chef Scott Hallsworth and co-founder Phar Shaweewan. Like many, we were intrigued by the name and Phar told us it was named after a song by 90s grunge band Dinosaur Jr. Hallsworth was previously head chef at Nobu, Park Lane for eight years before finding Kurobuta Izakaya on the King’s Road so really know his stuff when it comes to Asian cuisine. The menu describes Freakscene’s dishes as ‘curious Asian plates’, which I interpreted as pan-Asian fusion tapas.

As you would expect, we started with drinks. As it was a warm night, I was attracted to the Freak Smash (St Germaine, Gin, Grapes, Mint), a light and refreshing cocktail. We also ended our night with the saucily titled Wet Pussy shots (peach schnapps, vodka and a twist of lemon and lime), which was quite nostalgic as we reminisced drinking schnapps a lot as students in the ’90s.

When it came to the food, the menu is short and manageable, with a selection of around 12 dishes and sides to choose from. As we had eaten a bit already, we went for a small dinner than usual, but enjoyed everything so much, in hindsight probably could have ordered more. Like in a tapas restaurant, the various dishes just arrive as they’re cooked so your meal is stretched out into a relaxed and informal sitting. Our first dish to arrive was the Chili Crab and Avocado Wonton ‘Bombs’. Served in a crispy taco-esque wrap, the ‘bomb’ really packed a punch with a flavour explosion, with the avocado cooling down the heat of the chili. After our first bite, my friend and I actually looked each other and murmured ‘soooo good’ in unison. The crab bomb set the bar high for the remainder of our evening and we were not disappointed. My friend chowed down on the unusual Chicken-Fried Chicken with Peanut Soy and Picked Cucumber, which she thoroughly enjoyed. As a pescatarian, chicken was off-limits, but I was kept occupied by the Foil Baked Garlic Mushrooms with Sake, Soy and Butter, a tasty light side dish. The garlic was evident, but subtle so I wasn’t overpowered by the flavour. We finished with the Miso Grilled Black Cod Tacos with Sushi Rice and Scorched Red Chili Salsa, which was pretty special. As a huge fan of Mexican and Asian cuisine, this creative mix was a perfect combination.

I cannot recommend this place highly and have already been telling numerous friends to go. I am not exaggerating when I declare it was one of the best meals I’ve had in London in a long time. Every single dish was delicious and so different from anything I’ve tasted before. If you’re a fan of more informal dining in more of a bar atmosphere, than Freakscene is definitely for you. This venue is a cool and valuable addition to the Soho dining scene in a time where there’s too many chain restaurants creeping in for my liking. As Arnie says, I’ll be back… and soon!