← Celebrate the capital’s rich musical heritage at Soho Music Month 2018
Game on! Where to watch the World Cup and Wimbledon in London this summer 2018 →

If those tiles could talk! The remains of Queen Caroline’s bath in Greenwich Park

Have you spotted the hidden ruins of Queen Caroline’s Georgian mansion? 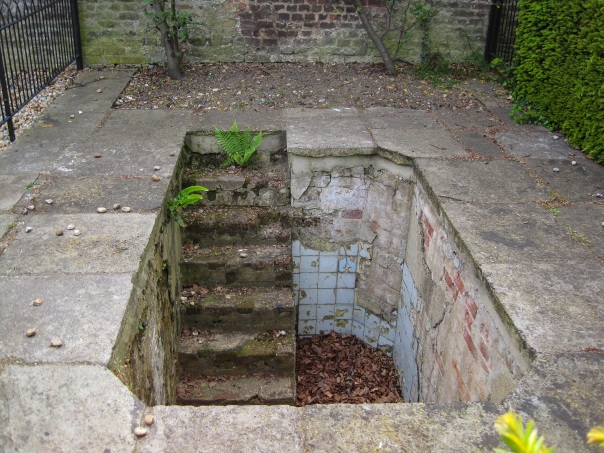 The remains of Queen Caroline’s bath in Greenwich Park

When visitors come to Greenwich Park, they usually make a beeline for the Royal Observatory with its historic GMT line and stunning views. However, in the south-west corner of the park, there’s a fascinating piece of London’s royal history hidden behind a hedge. Situated just a metre from the park’s wall is the remains of Queen Caroline’s bathhouse.

Caroline Amelia Elizabeth, Princess of Brunswick (1768-1821), was born in Germany and was betrothed to her cousin, the future King George IV (1762-1830) in an arranged marriage. The pair wed at St James’s Palace in April 1795, with the heir-to-the-throne apparently drunk during the ceremony! Their coupling was a disaster and they separated shortly after the birth of their daughter Princess Charlotte (1796-1817). By the time their child was a year old, Princess Caroline was living in a separate house in Charlton, eventually moving a few miles away to Montagu House in Blackheath around 1797-1799 (see a sketch of the house in 1800). 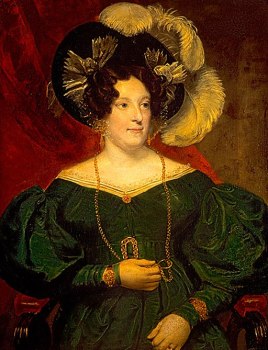 Montagu House was built in the late 17th century for Ralph Montagu, 1st Duke of Montagu (1638-1709). His son John Montagu, 2nd Duke of Montagu (1690-1749) employed Ignatius Sancho (1729-1780) as a butler at the house for two years. Sancho was born on a slave ship, but gained his freedom and educated himself, partially with the books from the library at Montagu House. He went on to become an early prominent figure in the fight for the abolition of slavery and wrote many letters on the subject. Today, there is a plaque commemorating Sancho on what was the wall of Montagu House. The bathhouse is believed to be an addition added by Princess Caroline in the early 19th century. It was a structure of glass and light lattice, with an adjoining greenhouse. Bathhouses were trendy in Georgian times for improving health and entertaining guests. Surprisingly to us 21st century Brits, the Georgians usually wore their clothes while bathing.

Returning to Princess Caroline, by the time she moved into Montagu House she was being subjected to harsh custody arrangements over her daughter Charlotte. Under English law at the time, the father’s rights were considered more important than the mother’s, and partially out of hatred for his estranged wife, George made things incredibly difficult. Princess Caroline was only allowed to see her daughter in the presence of a nurse and governess, overnight stays were forbidden and she was banned from making any decisions about Charlotte’s care or education.

During her 15 years or so living at Montagu House, Princess Caroline was the target of some wild rumours. A sociable and confident woman, Charlotte hosted famously wild parties at Montagu House and was romantically linked to several men. She was accused of flirting with Naval heroes, Admiral Sir William Sidney Smith (1764-1840) and Captain Thomas Manby (1769-1834) and having a brief relationship with politician and future Prime Minister George Canning (1770 –1827). She wasn’t just a known for her social skills, but also her generosity with poor neighbours. In 1802, Caroline adopted a baby boy William Austin when his desperate mother brought him to the house.

What was ‘the Delicate Investigation’?

Prince George’s questionable morals were well-known, with stories of many royal mistresses, illegitimate children, drinking, debts and an invalid 1785 marriage to Maria Fitzherbert (1756-1837). Despite this, his power and gender meant he could get away with a lot, regardless of his poor reputation with his subjects. In 1806, Princess Caroline’s behaviour and lifestyle were scrutinised as part of ‘the Delicate Investigation’. It was prompted by Caroline’s falling out with her neighbours Major-General Sir John Douglas and his wife Lady Douglas. The Princess had been close to the couple and Lady Douglas had briefly lived with the royal at Montagu House. When their friendship broke down, it appears Lady Douglas was out to destroy Caroline and made some shocking claims to the investigation. One such rumour was that William Austin was Caroline’s illegitimate child, prompting further speculation if her estranged husband was the father. Apparently, Caroline was quite the practical joker and used to feign morning sickness symptoms to tease her ladies-in-waiting. It could have been her sense of humour and the adoption of William that led Lady Douglas to this conclusion. The question mark over William’s paternity had to be determined by officials, who were concerned he could have a claim on the British throne. Among Lady Douglas’ other allegations were that Princess Caroline had made rude comments about the royal family and had touched her in an inappropriate, sexual manner. 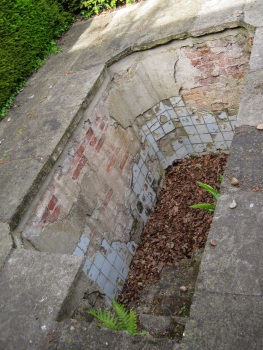 Prime Minister William Wyndham Grenville (1759-1834); the Lord Chancellor Thomas Erskine (1750-1823); the Lord Chief Justice, Edward Law (1750-1818) and the Home Secretary, Lord George John Spencer (1758-1834) made up the commission to preside over the investigation. During proceedings, the Princess’ relations with Smith, Manby and Canning were brought up, as well as claims of involvement with artist Thomas Lawrence (1769-1830) and Henry Hood, son of American Revolutionary War veteran Viscount Samuel Hood. The Princess’ servants were called to testify and they declined to confirm if the men were her lovers. They also insisted young William was brought to the house by his biological mother Sophia Austin, who later confirmed her son’s parentage when summoned before the commission. Eventually, the commission cleared Caroline of adultery due to lack of proof, but said her flirtatious behaviour was open to ‘unfavourable interpretations’.

Following the conclusion, Prince George was disappointed as he hoped to use her alleged adultery as grounds for a divorce. The Prince decided to punish Caroline further by restricting her daily visits with her daughter, Princess Charlotte, to weekly meetings. The estranged couple spent years in a war of words, often using the press, as they fought over their daughter. Despite the initial secrecy surrounding ‘the Delicate investigation’, it was later leaked to the press by George’s aides, with Caroline counteracting the claims with her own evidence. The public sided with Caroline and thought it was ridiculous that she had been investigated, while the future King’s own behaviour was so immoral. Even the author Jane Austen wrote of Caroline: “Poor woman, I shall support her as long as I can, because she is a woman and because I hate her husband.”

Around 1812-1814 (reports differ), Princess Caroline moved out of Montagu House and eventually left Britain in 1814. While living on the continent in November 1817, Caroline was devastated to find out her daughter Princess Charlotte had died in childbirth. Her estranged husband spitefully refused to write to inform her of the tragic news and Charlotte’s new husband Prince Leopold was too grief-stricken to let her know. Caroline found out accidentally from Prince George’s letter informing the Pope of Charlotte’s death while it was passing through the town of Pesaro, Italy, where she living at the time.

The warring exes had been in negotiations for a potential divorce when the Prince’s father King George III (1738-1820) died. Despite being estranged from her husband for two decades (and to his chagrin), Caroline was effectively Queen. She arrived back in Britain in June 1820 and was given a warm welcome by the public. Following her return, the Government had started taking steps to try to strip Caroline of her title and dissolve her marriage. They offered to increase her annuity if she moved abroad and accepted a divorce, but she refused. Fortunately for Caroline, the public were outraged so the bill to annul the marriage was withdrawn from parliament. She turned up uninvited to the Coronation of King George IV at Westminster Abbey on 19 July 1821, but was turned away so was never crowned Queen. Soon after, she fell ill and a few weeks later died at Brandenburg House (now demolished) in Hammersmith on 7 August 1821. Her cause of death could have been cancer or an intestinal obstruction, although there were unsubstantiated rumours she had been poisoned. Her funeral cortege on the way to burial in Germany was supposed to avoid central London in sensitivity to the King. However, the Queen’s supportive public were disgusted by her posthumous treatment and blocked roads along the way, therefore forcing a funeral procession through the city. Soldiers clashed with members of the public as it descended into chaos, resulting in two deaths.

As for Montagu House, it was demolished in 1814, with only the outline of her bath and a rear wall remaining. The windows were filled in and are now part of Greenwich Park’s wall. The bath was covered over during the 1980s and a plaque erected on the nearby wall reading: “A bath beneath the paving and this wall are all that remains of Montague House, the house between 1801 and 1813 of the Princess of Wales, later to become Queen Caroline, wife of George IV.” However, the Royal Parks excavated the bath in November 2001 and it is now protected by railings and a yew hedge which marks the boundary of the walls of the bathhouse and the adjoining greenhouse. Today, the site of the actual house is the Chesterfield Walk tennis courts. Visiting the ruins today, you can see the steps into the small bath, which still has many of its pale blue tiles.

Nearly 200 years after her death, we’re still not certain what was true about Queen Caroline’s personal life. While she could have just been a harmless flirt, her estranged husband spent years trying to paint her as a wanton woman and an adulteress. As for the bath, she could have just used it innocently for bathing, or perhaps it has some sexier secrets to reveal. If those tiles could talk… 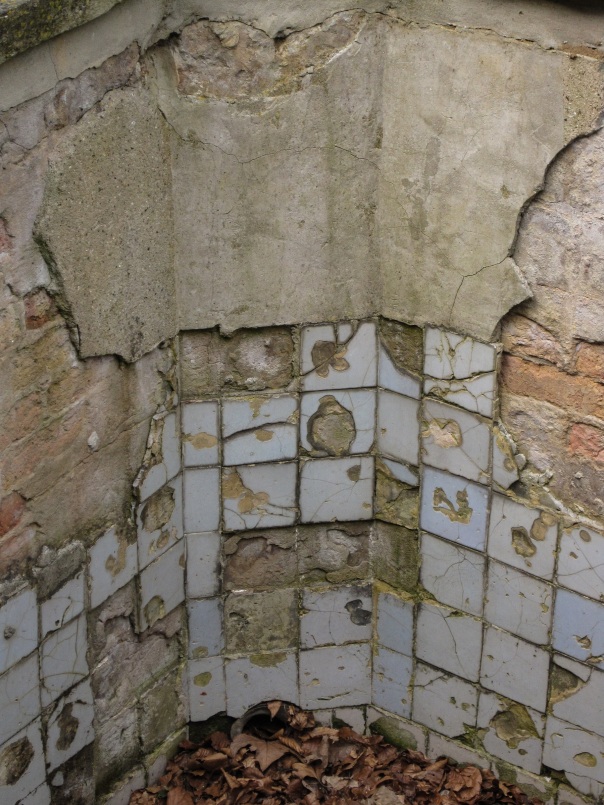 The bath was covered for years until its restoration in 2001

Posted on 3 Jun 2018, in Architecture, History, London and tagged derelict, Georgian, Greenwich, King George III, King George IV, ruins. Bookmark the permalink. Comments Off on If those tiles could talk! The remains of Queen Caroline’s bath in Greenwich Park.

← Celebrate the capital’s rich musical heritage at Soho Music Month 2018
Game on! Where to watch the World Cup and Wimbledon in London this summer 2018 →