← Game on! Where to watch the World Cup and Wimbledon in London this summer 2018
London’s first ‘human football’ zorbing on ice launches for the World Cup →

Emery Walker House: A stunning time capsule of the arts and crafts movement

Step back in time at the unique Emery Walker House in Hammersmith. 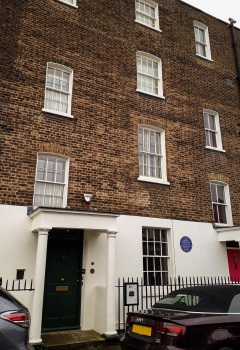 The Emery Walker House stands on a Georgian terrace in Hammersmith

I must admit not knowing too much about the arts and crafts movement until recently. I had known of William Morris for some years, but had never heard the name Emery Walker until this year. Recently, I was invited along to the Emery Walker House with a group of fellow bloggers to join one of their guided tours.

The Arts and Crafts movement was a response to the Industrial Revolution, which saw objects being mass-produced in factories, losing their originality and connection with the natural world. Figures of the A&C movement wanted to make products with more integrity and higher quality, with the crafter actually enjoying the process of making it. Textile designer, novelist and poet William Morris (1834–1896) was one of the leaders of the movement and believed in creating beautiful objects and interiors, influenced by the past. Morris established his own company Morris & Co, and store on Oxford Street selling his furniture, wallpaper and other interiors.

The Emery Walker House stands on Hammersmith Terrace, a neat row of narrow Georgian terraces with gardens overlooking the Thames. In the late 1800s and early 1900s, this small neighbourhood in west London became the hub of the arts and crafts movement. Sir Emery Walker (1851-1933) was a London-born engraver, photographer and printer. He was a self-made man, having left school at 13 and establishing his own business by 30. In the late 1870s, he befriended Morris when he moved to Hammersmith Terrace as they bonded over socialism. The pair became firm friends and saw each other nearly every day. Walker initially lived at No.3 Hammersmith Terrace, before moving to No.7 – the house you can visit today – in 1903 and remained there for the rest of his life. Morris lived a short walk away at Kelmscott House and sowed the seed for the growing arts and crafts community of the area. Artist, bookbinder and sometime business partner of Walker (more on that later!), T.J. Cobden-Sanderson (1840-1922) lived at No.7 before Walker did, while Morris’ daughter May (1862-1938) ended up living next door at No.8 with her husband Henry Halliday Sparling. The playwright George Bernard Shaw lodged with the couple for a time and ended up having an affair with May, causing her divorce. Walker and Morris were firm friends with architect Philip Webb, who made Walker a beneficiary of his will, with some of his furniture now in No.7. 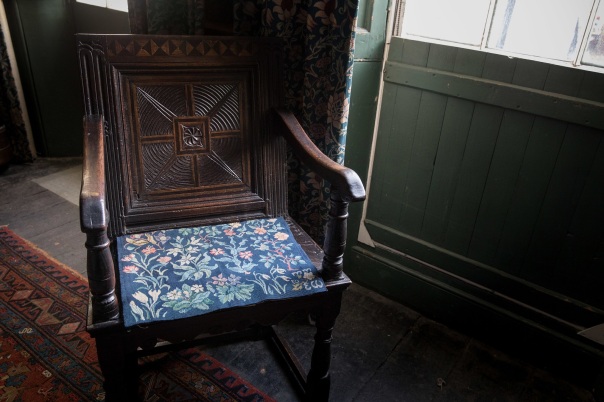 The view of the Thames from the Emery Walker House

One of the most interesting stories about Walker is his business partnership and eventual feud with Cobden-Sanderson. The latter established the Doves Bindery in 1893, eventually becoming the Doves Press in 1900 when he partnered with Walker following the closure of Kelmscott Press in 1898. Cobden-Sanderson’s wife Annie provided funding after Walker admitted he didn’t have enough money to contribute. Their publications, featuring the Doves typeface which was inspired by Italian Renaissance, were a huge success. However, by 1902, their working relationship began to sour with Cobden-Sanderson complaining Walker wasn’t devoting enough time to the business. In 1906, they agreed things weren’t working, but disagreed over the splitting of the assets. Walker was entitled to have the metal letters and castings, but Cobden-Sanderson didn’t want him to have them. Between 1913-1917, the elderly Cobden-Sanderson made around 170 trips from Hammersmith Terrace to Hammersmith Bridge in the middle of the night, lobbing the heavy type, punches and matrices and hurling them into the Thames. Following Cobden-Sanderson’s death in 1922, his widow Annie paid Walker a large sum towards compensating the loss of type. Nearly a century later, designer Robert Green and the Port Authority of London searched the Thames below Hammersmith Bridge and managed to recover 150 types of the Doves Press.

Following Walker’s death in 1933, his daughter Dorothy (1878-1963) inherited the house and decided to keep it as it was in her father’s time. She was a devotee of the arts and crafts movement and understood the importance to preserve it. She lived in the house until she died in 1963 with her Dutch carer Elizabeth de Haas (1918-1999), who also embraced Dorothy’s ethos. Following Dorothy’s death, Elizabeth focused her energies on preserving the house for future generations. Just four months before Elizabeth’s death, the Emery Walker Trust was established in 1999 with the aim to conserve, maintain and display the house and its contents. During recent conservation work, a staggering 6,000 objects were catalogued.

You start the tour in the museum’s reception room on the right. It was originally a telephone room, before being converted into a kitchen in the 1960s. The original patterned Morris lino is still on the floor and in the hallway. Heading into the dining room, you step back in time. In order to preserve the interiors, visitors are asked to keep to the floor coverings. The room is full to the brim with rugs, furniture, pictures and knick knacks. If you like minimalism, you may find it overwhelming. One of the most amazing relics is a small drawer containing Walker’s glasses and a snip of Morris’ hair cut on the day he died.

As you move through the house, every room is jam-packed with furniture, trinkets and patterns. Seeing original Morris wallpaper and hanging tapestries in situ is really quite something. The living room features the ‘Willow’ wallpaper pattern, which is still sold today, as well as original William De Morgan (1839-1917) tiles on the dresser. So many objects tell a story about the house’s former inhabitants and their visitors. A teapot in the front drawing room is said to belong to Dante Gabriel Rossetti (1828-1882). Morris’s wife Jane had an affair with Rossetti and he apparently left his teapot behind at one of the Morris homes following a row with his lover. Meanwhile, upstairs in the main bedroom is an embroidered bedspread by May Morris and the famous rush-seated Sussex chairs, which were available for sale at Morris & Co. Although the whole house has been under conservation, a patch of wallpaper has been left in its original dirty state to show how it looks without cleaning up.

All of the house’s biggest rooms have stunning views over the garden, which was lovingly tended to by Dorothy Walker during her lifetime. During the Walkers’ lifetimes, they hosted annual boat parties during the Oxbridge Boat Race. Today, the conservatory and garden is open to visitors on the tours. The garden is laid out in its 1890 plan, thanks to plans from Dorothy’s gardening notes.

While this house is evidently a must-do pilgrimage for any fan of the arts and crafts movement, it has a lot to interest others. Anyone who loves history, design or interiors will find plenty of inspiration and fascination in this very special place. The tours are small and limited so they can rightly preserve this unique space so you are advised to book in advance. It’s suggested to combine your tour with a visit to Morris’ home Kelmscott House a short walk down the river so you can really understand the movement and the people within the A&C community.

Metro Girl likes: While you’re in the area, head to The Dove pub for lunch, dinner or just a drink. The pub boasts a riverside terrace and a whole lot of history dating back to the 17th century. James Thomson composed Rule Britannia in the pub, while King Charles II enjoyed romantic rendezvous with his mistress Nell Gwynne. The small bar room immediately to the right as you enter the pub has entered the Guinness Book Of Records as the smallest bar room in the world. I enjoyed a delicious lunch of fresh pasta and Prosecco so I would highly recommend.

While you’re in the area, why not visit the William Morris Society? Check out Metro Girl’s review.

Shout out to fellow bloggers who joined me on this tour! Check out their fabulous blogs: Diary of a Londoness, So She Travelled, Catherine’s Cultural Wednesday, It’s Your London and Laura Porter.

← Game on! Where to watch the World Cup and Wimbledon in London this summer 2018
London’s first ‘human football’ zorbing on ice launches for the World Cup →
%d bloggers like this: