Soundtrack takes over Seven Dials for a free festival of music, food and fun 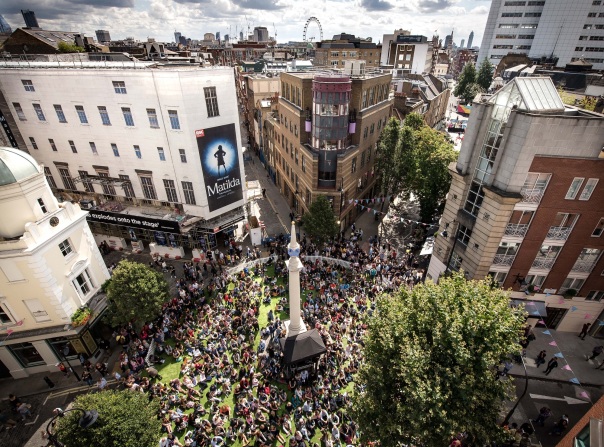 Coming to the West End this month is a brand new festival from the team behind Citadel. Seven Dials will be taken over by Soundtrack, a free one-day music festival. Revellers young and old will find plenty to entertain, including music, comedy, theatre and debates. All seven of the interconnecting streets will be closed to vehicle traffic for the day with a pop-up lawn surrounding the iconic dial. The free event is taking place to coincide with the Mayor of London’s ‘Sounds Like London’ campaign, which aims to celebrate the capital’s rich music heritage and talent.

Throughout the day, the open-air main stage in the centre of Seven Dials will host a variety of music acts, including London singer-songwriter Rukhsana Merrise, The Voice finalists Into The Ark, indie group Pumarosa and vintage-inspired rocker Ten Tonnes. Broadcaster and author Gemma Cairney will be hosting the action from 12pm-6pm. Meanwhile, funky choir Some Voices will be putting on flash mob performances around the area, while there will also be a free silent disco.

You can get into the festival spirit with The Gypsy Shrine on Monmouth Street, who will be offering free, eco-friendly glitter face painting all day. People can try their luck in an attempt to win festival tickets and more at the music-themed tombola, which raises money for charity partner Covent Garden Dragon Hall Trust. When you’re feeling hungry, you can head to the many street food and alfresco dining options, including independent café BOKI, pop-up pizza and prosecco bar from the Escapologist and Portuguese eaterie Canela. Many of the area’s establishments and shops, such as Rosa’s Thai, Rossopomodoero, Duke & Dexter and Club Monaco will be offering 20% off all day. There will also be a pop-up superfood smoothie bar from Neals Yard Remedies and a pop-up cocktail bar from Monmouth Kitchen.

While the festival is free to attend, its recommended you register for your festival map and ticket at Seven Dials’ website. As a ticket holder, you can pick up a free Mint Julep cocktail from the Hawksmoor Seven Dials x Evan Williams pop up bar on Earlham Street.

For a guide to what else is on in London in June, click here.

← London’s first ‘human football’ zorbing on ice launches for the World Cup
Celebrate 150 years of Connaught Village with ‘A Walk Through Time’ →
%d bloggers like this: