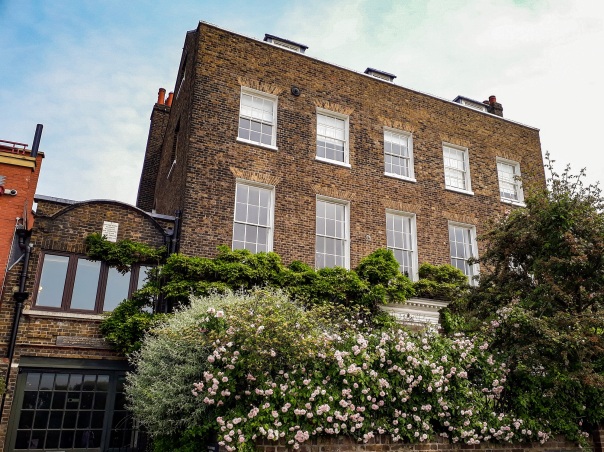 The name William Morris is often associated with home interiors, with some of his iconic patterns still available to buy today. However, the man himself was so much more, with poet, novelist, translator, and socialist activist among the many hats he wore. Born to a middle-class family in Walthamstow, William Morris (1834-1896) became influenced by the Medieval world while studying the Classics at Oxford University. The Medieval period appealed to Morris because of its chivalric values and a more organic manufacturing process. He disliked what the Industrial Revolution had done to British people and their homes. He saw people were moving away from nature into the cities and were doing repetitive tasks, while their houses were full of identical, lower quality factory-made products. Morris grew to dislike capitalism and became enamoured with socialism. When he was at Oxford, Morris found a kindred spirit in artist and designer Edward Burne-Jones (1833-1898), who went on to become a lifelong friend and collaborator. Following graduation, Morris became an apprentice to Neo-Gothic architect George Edmund Street (1824-1881), where he met fellow apprentice Philip Webb (1831-1915). However, Morris soon tired of architecture and wanted to focus on art. Around this period, he was spending a lot of time with Burne-Jones, who had become an apprentice to Pre-Raphaelite painter Dante Gabriel Rossetti (1828-1882). Morris and Burne-Jones ended up living together in a flat at 17 Red Lion Square in Bloomsbury. 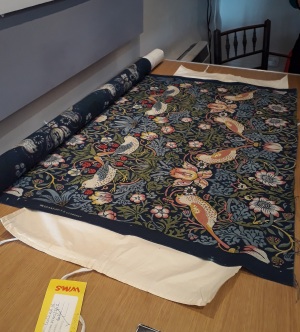 By the mid 1850s, Morris was writing poetry and designing furniture, manuscripts and hangings in a medieval style. While he hadn’t established a successful career at this point, his personal life appeared to be going well as he married Jane Burden (1839-1914) in 1859. Following his marriage, Morris teamed up with architect Webb to design a family home, The Red House, in Bexleyheath, south-east London. The house was very different from the Victorian and Georgian designs and exists today as a unique example of arts and crafts architecture. After furnishing The Red House in a Medieval style, Morris founded a decorative arts company, Morris, Marshall, Faulkner & Co in 1861. They aimed to bring the craftmanship and beauty of the Middle Ages back to British homes. It sold furniture, murals, architectural carvings, metalwork and stained glass windows. With Victorians going nuts for Neo-Gothic architecture, the company’s stained glass in particular was a big hit. It didn’t take long before the wealthy became fans of MMF&Co’s aesthetic. Despite Morris’s socialist values, his products did have higher labour costs, so weren’t as accessible to the lower classes. A year after establishing the company, Morris abandoned painting and started designing wallpaper.

Morris didn’t spend too long living at the Red House as the long commute to London for work was exhausting so he sold it in 1865. The family then moved into a flat above MMF&Co’s shop at 26 Queen Square in Bloomsbury. Although Jane gave birth to two daughters, Jane and Mary ‘May’ in 1861 and 1862 respectively, the Morris marriage wasn’t conventional. Jane began a long on/off love affair with Rossetti, who she regularly sat for as a model for his paintings. 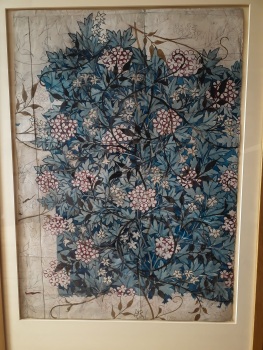 During the 1870s, the Morris family rented a country home, the 16th century Kelmscott Manor in Oxfordshire, while keeping a home in Bloomsbury as a London base. Rather unusually, Morris obtained a joint tenancy with Rossetti on Kelmscott Manor, despite the latter’s relationship with Jane. By 1874, Morris and Rossetti’s friendship was over, with the artist quitting Kelmscott House. By 1875, Morris took control of the company and it was renamed Morris & Co. After a few wobbles, business started going so well, he opened a large store on Oxford Street in 1877. In 1879, Morris rented a new London base in Hammersmith, which he named Kelmscott House. His move to Hammersmith kickstarted the area becoming a magnet to a growing arts and crafts community. Morris met the engraver and printer Emery Walker, who lived on Hammersmith Terrace, and a lifelong friendship began. Inspired by Walker, Morris founded the Kelmscott Press in Hammersmith in 1891. He thought modern books were ugly and poorly made so wanted to put beauty and a sense of history back into reading. For his press, he created three types – Golden, Troy and Chauncer, and printed in dark German ink on handmade paper. Over seven years, the Kelmscott Press published 53 works with Morris overseeing every detail. Morris died at Kelmscott House of tuberculosis on 4 October 1896, with press obituaries primarily remembering him as a poet. Despite Morris’ wish for the Kelmscott Press to keep going, it was sold two years after his death as his staff said they couldn’t uphold his high standards. 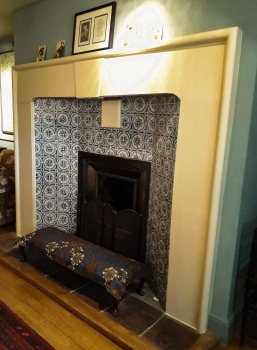 Today, the basement, coach house and a small part of the garden of Kelmscott House is home to the William Morris Society. It was founded in 1955 to preserve and promote the life, work and ideas of Morris through events, education, publications and exhibitions and a library of his work. The William Morris Trust inherited Kelmscott House in the 1970s, but had to lease out the main house to residents.

The William Morris Society is open to the public two days a week. You can see a collection of Morris works, including original Morris & Co wallpaper, tapestries and lino. The servants’ hall features a reproduction of an original Morris designed wallpaper and a grand Robert Adams fireplace with original tiles designed by Webb. On my visit, I got to see pieces of May Morris’ embroidery and some of the famous ‘Sussex’ chairs by Morris & Co. Of course, Morris the man was more than just the arts and crafts movement, he was a great socialist too. You can check out several posters and documents from the Hammersmith Socialist meetings that used to take place in the coach house. Morris was treasurer, while Walker was secretary and they hosted many interesting speakers, including George Bernard Shaw, Peter Kropotkin and Gustav Hault. The Society also houses an original printing press from 1835 that still works and some accompanying original types. If you’re a fan of William Morris designs or poetry, or of the arts and crafts movement as a whole, it’s an interesting place to visit. When you’re in Hammersmith, try to combine your trip with a tour of the nearby Emery Walker House, which features many Morris designs and artefacts. 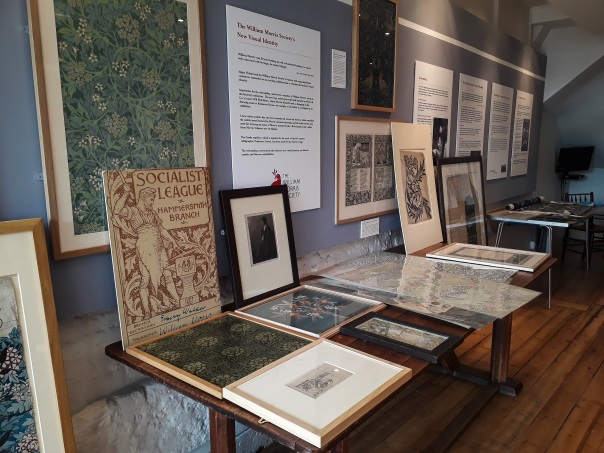 The Society’s coach house features a range of Morris originals

Metro Girl likes: While you’re in the area, head to The Dove pub for lunch, dinner or just a drink. The pub boasts a riverside terrace and a whole lot of history dating back to the 17th century. James Thomson composed Rule Britannia in the pub, while King Charles II enjoyed romantic rendezvous there with his mistress Nell Gwynne. The small bar room immediately to the right as you enter the pub has entered the Guinness Book Of Records as the smallest bar room in the world. I enjoyed a delicious lunch of fresh pasta and Prosecco so I would highly recommend.

← Celebrate the mighty Margarita at the Cointreau pop-up at the South Place Hotel
Guide to what’s on in London in July 2018 →
%d bloggers like this: