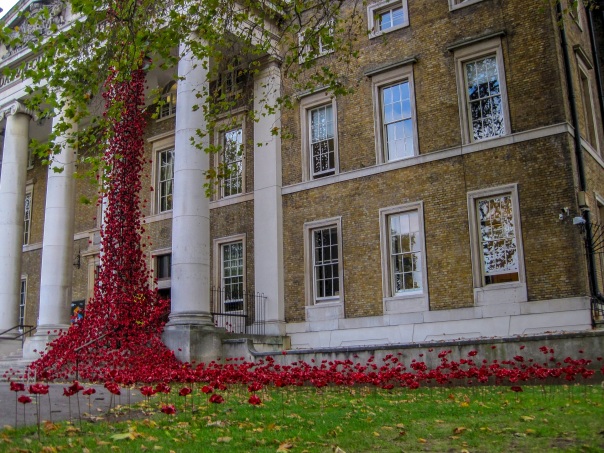 Back in 2014, the original Poppies installation in the moat of the Tower of London was such a huge hit, MPs made public pleas for its to be extended. Blood Swept Lands and Seas of Red was created by artist Paul Cummins and designer Tom Piper and featured 888,245 poppy sculptures, each one representing a fatality in World War I. It became so popular, its estimated over 4 million people headed to Tower Hill to see them in situ. Each poppy was bought for £25 by members of the public, with the money raised going to charities supporting military veterans and their families. The installation ended on its scheduled closure date of Remembrance Day 2014.

However, with the poppies proving so popular, it was agreed that the Weeping Window and the Wave would go on tour around the UK so the rest of the country could get to see. The Window and Wave have been touring separately over the past few years, but their travels will end in November 2018 – the 100th anniversary of the end of the Great War. So far, the poppies have been installed at Hereford Cathedral, Royal Armouries in Fort Nelson, Carlisle Castle, Middleport Pottery (Stoke-on-Trent), Ulster Museum, CWGC Plymouth Naval Memorial, the National Assembly for Wales, The Silk Mill (Derby), Southend’s Barge Pier, Hull Maritime Museum, Caernarfon Castle, The Black Watch Museum (Perth), Lincoln Castle, St Magnus Cathedral, St George’s Hall (Liverpool), Woodhorn Museum and Yorkshire Sculpture Park.

As the end of the tour approaches, the Weeping Window has been erected tumbling out of one of the cupola windows at the Imperial War Museum in London. It opened on 5 October on the exterior of the Georgian building, and will remain in situ for just over six weeks. Entrance to the grounds – and indeed the IWM – are free so you can visit at any time. The installation will be lit up at night and looked particularly spectacular in the darkness when I rode past on a bus one evening last week. The Weeping Window will end on 18 November – just one week after Remembrance Day. Meanwhile, it’s partner the Wave is currently on display at the Imperial War Museum North in Manchester.

For the latest guide to what’s on in London, click here.

← The Savoy launches The Tiger Who Came To Tea afternoon tea for families
Guide to what’s on in London this Halloween 2018 →
%d bloggers like this: