As the temperatures drop and the nights set in, cosying up in front of a good film is more appealing than ever. This autumn, Bluebird Chelsea is launching a weekly movie night with films, food and cocktails. Cointreau will transform the King’s Road venue’s cinema room into a wintry orangery.

Every Tuesday evening, film fans can enjoy hot food, Cointreau cocktails and popcorn as they settle down to watch a movie. Sit on a comfy sofa or chair surrounded by orange tress as you watch films that have been chosen for their popular soundtracks. Among those being screened include The Greatest Showman, Dreamgirls, Moulin Rouge! and Whiplash. By the time December arrives, things will be taking a festive turn with Love Actually and The Holiday. 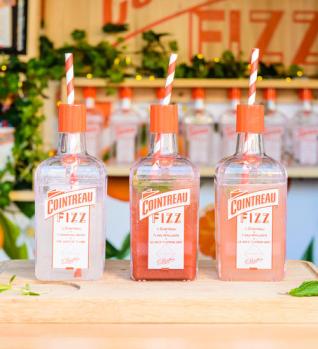 Sip on a Cointreau cocktail while watching a film

Meanwhile, your appetites are also fulfilled for as your ticket includes a Bluebird hot dog (spiced pork, pickled cabbage and chilli mayo) or a vegan burger (mushroom and edamame with sriracha mayo and baby gem). Additional food and drinks can purchased on the night.

The film programme is as follows:

← Guide to what’s on in London this Halloween 2018
Bridging Home by Do Ho Suh for Sculpture In The City →
%d bloggers like this: