← Guide to London’s outdoor and pop-up cinemas in summer 2019
Scripts for Supper presents Wind in the Willows: An immersive culinary theatrical experience →

Review: Visiting the Tower of London with a Context Travel tour

Exploring the history of the Tower on a three-hour semi-private tour. 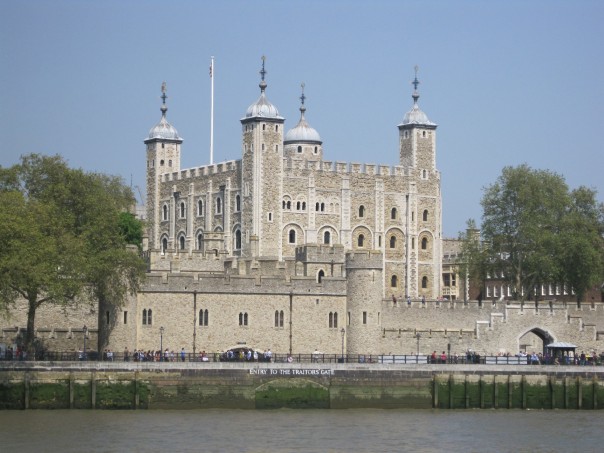 The Tower of London is one of the capital’s most iconic sights. It’s been standing on the fringes of the City, looming over the River Thames, for over 1,000 years. With such an amazing heritage, the layers of history within the Tower walls can be overwhelming for a visitor. I previously visited the Tower of London as a teenager and didn’t really absorb the stories of the complex as I knew I would as an adult. Over the Easter Weekend, I paid a long-awaited return to the Tower on a semi-private tour with Context Travel.

Context Travel is a specialist walking tour company, which offers private, semi-private and custom tours in over 50 cities worldwide. Aiming to put tourist sights ‘in context’, the tours are hosted by experts in their field, giving you an in-depth knowledge while taking you off-the-beaten track to find hidden places and details. Context Travel semi-private tours are in small groups, which immediately appealed to me because I’m not a fan of sharing my travel/tourist experiences (even in my hometown of London!) with a huge group of people.

One of the Tower Guards on duty

My three-hour tour started on a sunny Sunday morning so the weather was on our side. Myself and two other participants met our guide Lesley outside Tower Hill station and headed straight to the entrance of the complex. The immediate bonus of visiting on a group tour I noticed was being able to bypass the long queue and we were within the tower walls within no time.

We swiftly passed through the Middle Tower and crossed the now-dry moat before passing under the Byward Tower for our first stop on the tour. Looking at the complex, I would find it hard to identify the ages of the different parts. However, Lesley shared her great knowledge of each buildings’ history, which King (or Queen) was responsible for its building and how their use had evolved over time.

Before delving deeper into the various sections, Lesley suggested we head straight to the Jewel House to visit the world-famous Crown Jewels. As guides aren’t allowed to accompany tour groups inside during busy periods, Lesley gave us easy-to-remember pointers on what to focus on inside. Covering 800 years of the British monarchy, the Jewel House contains some truly amazing sights and spectacular examples of wealth. I recognised many crowns and other regalia and vestments I had seen worn by Queen Elizabeth II over the decades. It was great to see them in the flesh so to speak – albeit surrounded by heavy security.

The Jewel Tower is home to the Crown Jewels

The Gifford family shield from the 16th century

Following the world’s brightest bling, we headed over to Tower Green, one of the most notorious parts of the Tower. The small patch of greenery was formerly home to where some of the Tower executions took place, where people such as Anne Boleyn lost their heads on the chopping block. While we were hearing the rather grim stories, we were interrupted by one of the ravens, Merlina, who Lesley explained is one of the more anti-social of the seven birds who lives within the confines of the Tower. Merlina’s presence proved a good opportunity to discuss the birds’ long association with the Tower and the myths surrounding them. The ravens are just as much a part of the Tower as the Beefeaters. Talking of Beefeaters, we were lucky enough to see one of them – a rare female Beefeater – in her ceremonial dress, which is much more elaborate than their usual uniform.

We then headed into the nearby Beauchamp Tower – a 13th century tower built during the reign of King Edward I (1239-1307). The tower imprisoned many high-ranking prisoners over the years, and features a lot of Medieval graffiti commemorating some of their time behind bars. You could easily spend a long time in the Beauchamp exploring all the fascinating etchings, but there’s still a lot of the Tower complex to explore. 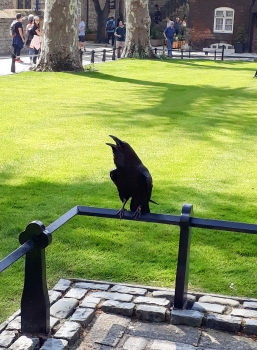 One of the main attractions is the White Tower – the Norman castle-type building in the centre. Built by William the Conqueror (one fact I always retained from school), it’s in remarkable shape for being over a millennia old… if only those walls could talk! The most surprising element of the White Tower is the Chapel of St John The Evangelist, hidden away in south-east corner. Lesley admitted it was one of her favourite parts of the Tower because it is so unexpected and remains in its original Norman state – without the paintings or mosaics that would have been added in later centuries.

Overall, I really enjoyed the Context Tour and getting to rediscover one of London’s most iconic sights as an adult. The Tower of London is so huge and overwhelming, it was great to get a deep, but manageable exploration of the its history. Lesley had an impressive knowledge of the place and gave informative answers to all of our questions. Being part of a small tour meant we could move around at a good pace and were able to hear every word as Lesley shared the stories of the Tower.

Check out Metro Girl’s reviews and history pieces of other London attractions.

Posted on 15 May 2019, in History, London, Museums, Tourist Attractions and tagged Tower of London, Travel. Bookmark the permalink. 1 Comment.

← Guide to London’s outdoor and pop-up cinemas in summer 2019
Scripts for Supper presents Wind in the Willows: An immersive culinary theatrical experience →
%d bloggers like this: