The history behind this Victorian office, now home to exhibition and events spaces.

Standing on the eastern edge of the City of Westminster is a striking neo-Gothic building. Overlooking the River Thames and the Victoria Embankment is Two Temple Place. Although today the building is an events space and exhibition venue, it started life as an office for the world’s richest man. 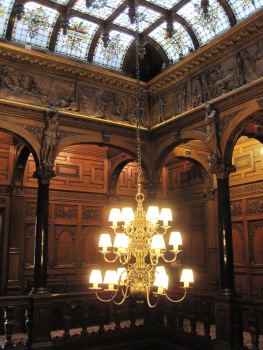 The Great Hall gallery is supported by ebony columns

William Waldorf Astor (1848-1919) was an American attorney, publisher, philanthropist and politician. After an initial career in law and politics, Astor inherited his father John Jacob Astor III’s fortune in 1890, making him exceptionally wealthy. The same year, he financed the building of the original Waldorf Hotel in New York City, which opened in 1893 and stood for 36 years before being demolished to make way for the Empire State Building.

Astor cut short his life in the Big Apple following a family feud and relocated to Britain in 1891. In addition to falling out with his aunt Caroline Astor, he also believed England would be safer for his children against the threat of kidnap. He bought a plot of land in legal district of Temple and commissioned Gothic Revival architect John Loughborough Pearson (1817-1897) to build him a London office. Although intended as an office, Astor also wanted residential space. As Two Temple Place was being built, Astor bought the Buckingham estate Cliveden for his family to live in. He later expanded his property portfolio with Hever Castle in Kent in 1903, as well as bank-rolling the building of the Waldorf-Astoria hotel in London’s Aldwych. 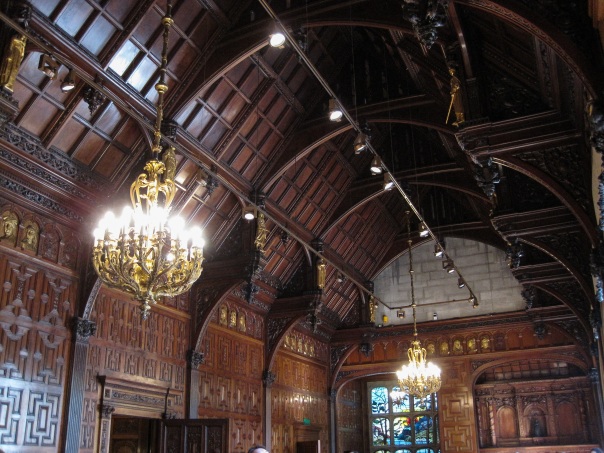 The hammerbeam roof is made of Spanish mahogany 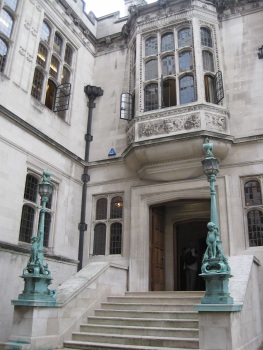 Originally named the Astor Estate Office, it was completed in 1895. Two Temple Place is a two-storey building, with a Gothic-Elizabethan-style exterior made of Portland stone. Among the rooms included were the great hall, library and strong room with two fortified safes to protect Astor’s riches. English sculptor Nathaniel Hitch (1845–1938) created ornate features, including gargoyles, on the exterior, while a golden likeness of Christopher Columbus’ ship La Santa Maria – which he used to sail to America – was erected as a weathervane. British sculptor William Silver Frith (1850–1924) made the ornamental lamppost sculptures of cherubs holding early telephones at the portico front entrance. The communicative angels celebrate the fact that Two Temple Place was one of the first houses in the capital to have a working telephone.

With such a fortune at Astor’s disposal, there was no expense spared on the entirety of the building project. The rooms were all decked out in wood-panelling, giving it an ‘olde world’ feel. English metal worker J Starkie Gardner (1844-1930) created ornate metalwork for the interior and exterior of the building. Meanwhile, the Astor family’s interior decorator John Dibblee Crace (1838-1919) took inspiration from the French Renaissance for the furnishings. Astor was a huge fan of symbolism and wanted the building to link the old world with the new world. Around 54 characters from history and fiction are depicted in carvings in the entrance hall or on the gilded frieze in the Great Hall, including Marie Antoinette, Pocahontas, Anne Boleyn, Niccolò Machiavelli, Marc Anthony, Cleopatra, Macbeth, Othello, and characters from The Three Musketeers – Astor’s favourite book. One of the building’s main attractions is the grand, oak staircase. Standing on the inlaid marble floor, you look up to see wood carvings, a square gallery and a square-domed, stained glass ceiling supported by ebony Corinthian columns.

The Great Hall is also equally awe-inspiring, with its colourful stained glass windows by Clayton and Bell. One window depicts a Swiss summer landscape at sunrise (east-facing), which the other features an Alpine landscape at sunset (west-facing). The ceiling is an expansive hammerbeam roof made of Spanish mahogany, while the gilded frieze captures the imagination with its many characters.

Astor’s family rented out the building following his death in 1919 and eventually sold it. Insurance company Sun Life Canada renamed the building Sun of Canada House when they operated out of the building in 1919-1928. They commissioned Pearson’s son Frank Loughborough Pearson (1864-1947) to make some alterations in the style of his father. By the late ’20s, it was bought by the Society of Incorporated Accountants and Auditors as their head office, who renamed it again as the Incorporated Accountants Hall. The building was officially opened by the Prince Albert, Duke of York (1895-1952) – the future George VI – and his wife Elizabeth, Duchess of York (1900-2002) in February 1929. During the Society’s ownership, the Hall and neighbouring Electra House were hit by a World War II V1 flying bomb in July 1944, causing mortalities and considerable damage. Three people at Electra House were killed, while water from the building flooded the basement of Astor House next door, destroying artwork by Firth. While a lot of war-damaged buildings were never replaced, fortunately Two Temple Pace was fully restored in 1949-1951. Over a decade later, the building changed hands again when it was purchased by medical supplies company Smith & Nephew in 1960 as its new headquarters.

One of the ornate interior doors

Two Temple Place was much admired by those who saw it, and continues to do so. The heritage campaigner Sir John Betjeman (1906-1984) described it as “one of the most attractive late-Victorian private houses in London”. Historic England gave the gates, railings and gate piers Grade II* listings in February 1970.

In 1999, Two Temple Place was bought by banker Richard Q Hoare OBE for his charitable organisation, The Bulldog Trust. Today it serves as a public gallery, as well as function and events space. You may have seen it on TV or films, such as Bridget Jones’s Diary: The Edge of Reason; Downton Abbey; Silent Witness, Mr Selfridge and The Crown. It launched as a gallery with a William Morris exhibition in 2011. Two Temple Place can be visited during its annual winter art exhibitions (January-April), or when it takes part in Open House London in September. During exhibitions, there is also an on-site café and shop. Throughout the year, there are also workshops, late-night openings, tours and other events. Money raised by rental income goes to fund financial and advisory assistance for charities.

The striking stained glass ceiling over the staircase

← Baroque and art nouveau collide at Old Finsbury Town Hall
Hold fire! The story behind the cannon bollard on Bankside →
%d bloggers like this: